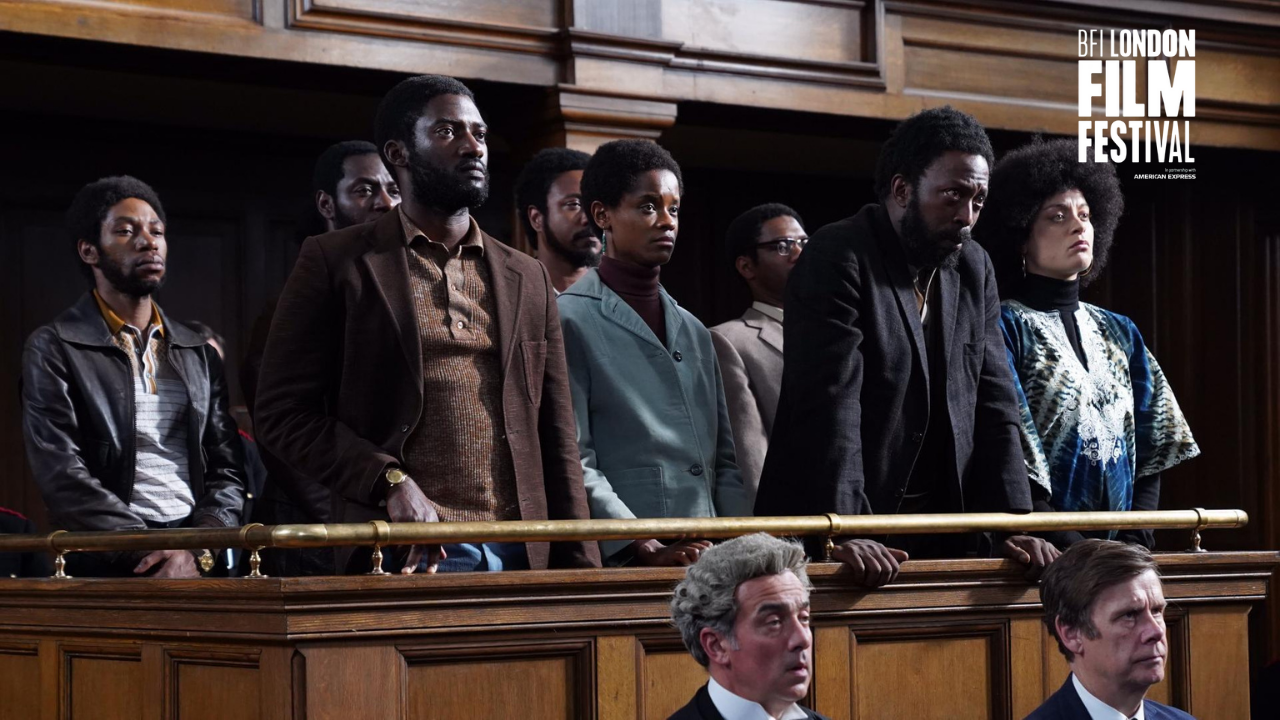 Steve McQueen’s Mangrove is a stunning, emotional tour de force, illustrating the long legacy of not just struggle, but of resistance by the Black British community.

In 1970, nine activists were charged with “Riot and Affray” and brought before the Old Bailey for protesting against the racial hatred wrought upon them by the police. They were to be made an example of for daring to demand equal treatment.

The first half of the film focuses on the Mangrove restaurant in Notting Hill, run by Frank Crichlow (Shaun Parkes). The restaurant serves not only as a place to get the sweet, hot tastes of back-ah-yard food, but as a hub for the West Indian community – far from home, but building lives and raising children. The Mangrove is where they can enjoy breadfruit and callaloo, music, and the company of their peers. This peace and vibrancy is violated continuously by chaos as police swarm the Mangrove. Tables torn apart, plates smashed, occupants manhandled and thrown to the floor. If the almost five-minute intervals in which we get these disruptive scenes feels excessive – that’s because it was – and is no mistake on McQueen’s part.

Amongst those riding out the rough treatment with Frank is legendary activist Darcus Howe (Malachi Kirby), his partner Barbra Beese (Rochenda Sandall), a leader of the British Black Panther Party and trade union organiser Althea Jones-LeCointe (Letitia Wright). After Frank is urged to accept his place as a pillar of the Black community and role in preserving the Mangrove, a protest is carried out peacefully; the police respond with batons and handcuffs.

The trial that follows is intense and infuriating, with Malachi Kirby expertly channelling Darcus’ passion and poeticism. At the same time, Letitia Wright gives an Oscar-worthy performance as the glue holding the Nine together in the face of forces seeking to divide them. Mangrove is a film that unleashes a kaleidoscope of emotions, each that McQueen expertly teases out from even the smallest of details. The colander that rolls around the floor in the rubble of another police raid, the smokiness and silence of the backroom as the Nine await their fate, the way Darcus’ fist balls even as his closing speech notes shake in his hand.

It is a heightened experience to watch Black British history played out on-screen during a time where the topic of Black history and its erasure from Britain’s collective memory and curriculum is starting to be noticed at large. Through Mangrove, McQueen does more than simply remind us of the past  –for Black viewers, this story, these emotions, are ever-present. We exist both as the generation the Nine fought for, as well as a generation keenly aware that this is still a Britain that requires us to do the same for those after us.

Wright as Althea fervently declares that “we mustn’t be victims, but protagonists of our stories”. As the first entry into McQueen’s five-part Small Axe series, Mangrove is a proud proclamation of the rich facets of Blackness that deserve to be known.