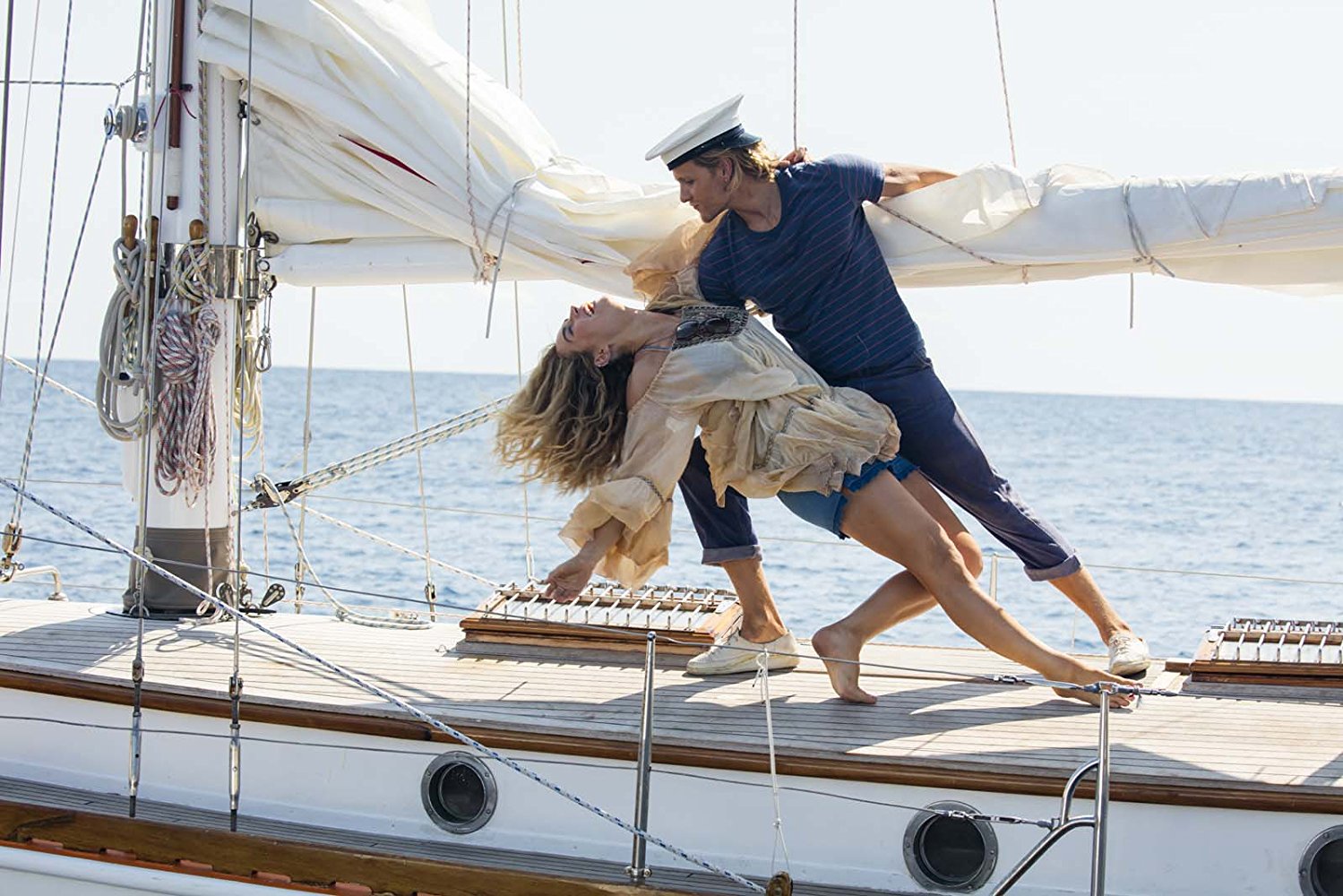 Sure. Pierce Brosnan singing ABBA’s SOS had a hint of the Borat (Sorry Sacha!) about it. But the summer of 2008 bared witness to a cinematic juggernaut in ‘Mamma Mia’, a jubilant jukebox musical whose sense of joy and fun proved irresistible for audiences. Considering life’s too short. Ten years on we return to the sumptuous setting of Kalokairi Greece with ‘Here We Go Again’, as the sequel fleshes out the timeline, remaining keen to create more cinematic memories.

Increasingly doubtful of her own capabilities. The dynamo duo of Christine Baranski’s Tanya and Julie Walters’ Rosie look to bolster her confidence by delving into Donna’s past, as Lily James’ enthused younger incarnation of the character guides us through her eventful youth with the dungarees intact, reliving her initial encounters in 1979 with Sophie’s dads (Hugh Skinner/Jeremy Irvine/Josh Dylan).

Previously unapologetic in its ramshackle charm and high camp. Director Ol Parker to much relief resists applying restraint to its energetic, big-hearted song and dance numbers, whilst technically and narratively tightening up the deficiencies that perhaps plagued its 2008 counterpart for the purists, with a sharper focus on emotional engagement. As a result, it may not be as quick to overwhelm us with its blindingly sunny disposition like its predecessor, occasionally labouring in its first half with its time-hopping.

Yet when those glorious highs arrive like a new take on ‘Dancing Queen’ and Cher’s stellar firework-heavy rendition of ‘Fernando’, whose cameo evoked hearty cheers in the screening i was in. They are now armed with a poignant and reflective slant, reinforcing the ingenuity in how these timeless songs are integrated into the framework, in order to offer fresh interpretations.

Lighting up the screen as a young Donna Sheridan. Lily James captures the carefree spirit and mannerisms of the character superbly, proving a solid counterpart to Meryl Streep’s original performance and Amanda Seyfried’s Sophie in the singing stakes. Speaking of Streep, much has been made about her (lack of?) involvement in this follow-up. Without slipping into spoiler territory, her gorgeous screen moments this time around epitomise why many fans deemed her an instant hit in the first film. Elsewhere, Christine Baranski and Julie Walters continue to provide fantastic farce, stealing much of the script’s zingy dialogue whilst Andy Garcia’s enigmatic hotel manager is a disarming and dashing addition.

It may not have been a sequel we were warming up the vocal chords for. Yet in striking a killer balance between emotive and euphoric. ‘Mamma Mia! Here We Go Again’ is a truly wonderful follow-up that brims with sincerity and show-stopping splendour.

Dig out the spandex and unleash your inner ‘Super Trouper’…