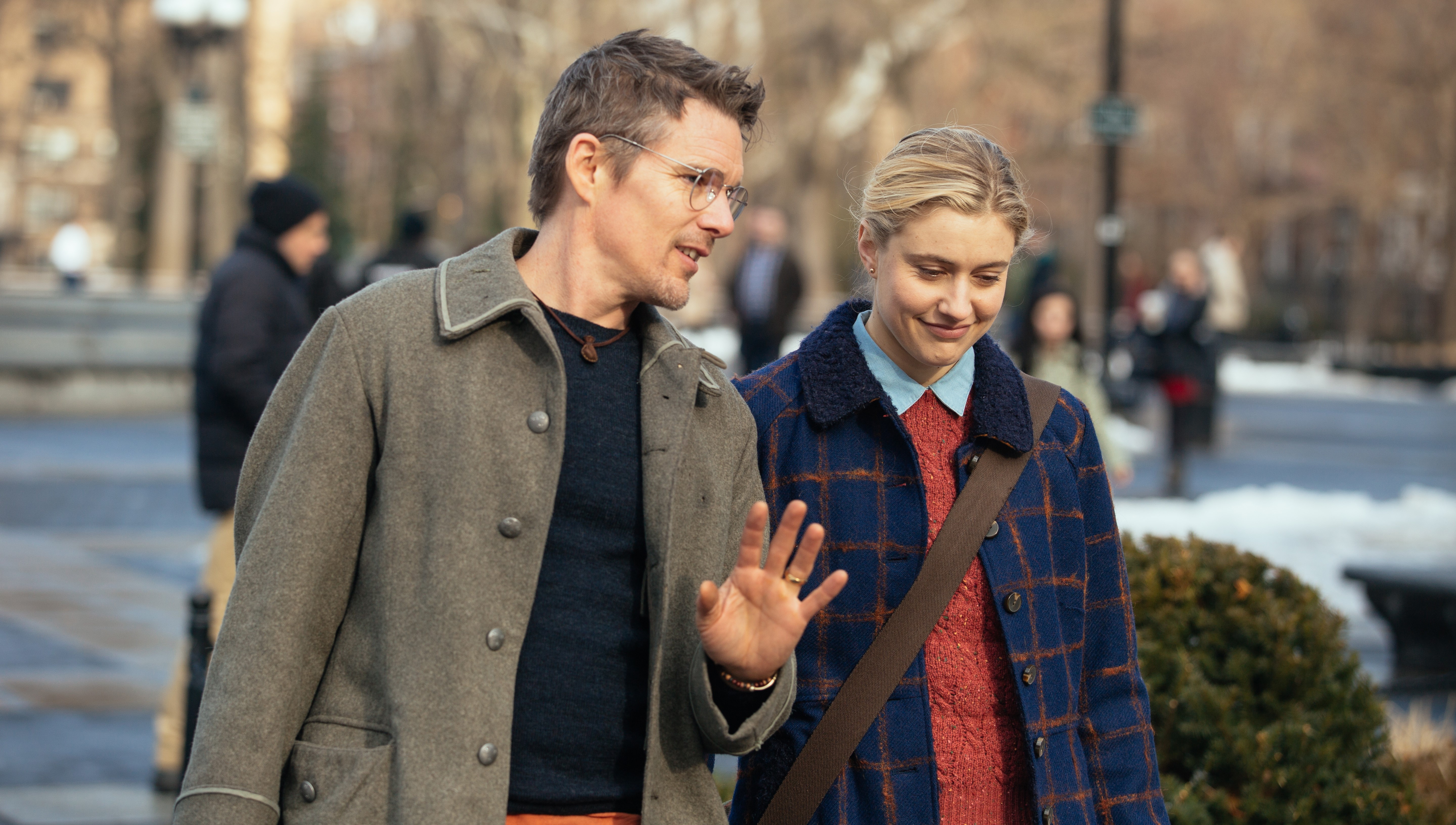 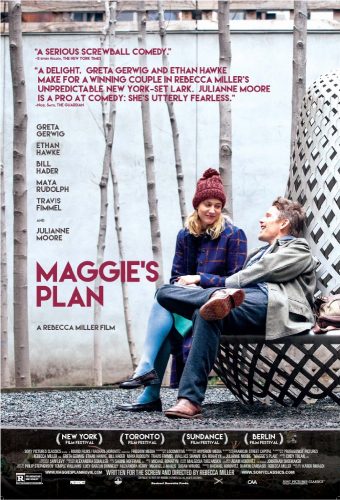 Great Gerwig is my favourite typing error.  And Freud would have a field day with the reasons why but, put simply, Greta – got it right this time! – Gerwig is easily one of the best comedy actresses going.  “Frances Ha”, “Mistress America” and soon-to-be-released “Wiener-Dog” all show off her distinctive style to perfection.  So does her latest, “Maggie’s Plan”, but in a different light.

The Maggie of the title (Gerwig) actually has two plans.  The first is to have a baby by sperm donor and bring up the child on her own.  But that’s de-railed when she falls for college lecturer John (Ethan Hawke), who also happens to be married to the glamorous Georgette (Julianne Moore).  He moves in with Maggie, she then has a little girl of her own but after several years together the relationship runs out of steam.  At which point plan two swings into action.  Maggie decides that John and Georgette were destined to be together and sets about making it happen.

The film comes from director/writer Rebecca Miller and is her first in six years, based on a novel from Karen Rinaldi.  But Miller has expanded the characters on the pages and even added a couple of her own, Tony (Bill Hader) and his wife Felicia (Maya Rudolph).  He’s Maggie’s ex from her student days and the couple see Maggie through the various changes in her life, with Bill providing regular, no-holds-barred reality checks.  They’re joyously funny creations, Hader especially, and shine among the cast: given the line-up, that takes some doing.  They deserve a film of their own.

Miller might have widened the scope of the book, but she’s given us a streamlined, almost lean story.  There isn’t a single superfluous scene or moment, throwing us straight into the first storyline almost immediately.  All we see beforehand is Maggie helping a blind man across the road, which tells us something about her, and then we’re plunged into her conversation with her potential sperm donor, pickle magnate Guy (Travis Fimmel).  Before we know it, it’s several months later, she’s received the required 10cc and is just about to do the deed when John shows up on her doorstep and they get it together.  So, when it’s three years later and she has a blonde toddler in tow, we’re wondering about the little girl’s father.  Maggie, on the other hand, has no doubts whatsoever.

That initial shot of Maggie, being helpful and kind, shows us one facet of her character, but the film is driven by the side indicated in the title.  She’s something of a control freak, but is so nice and reasonable about doing things her way that it’s easy to go along with her.  That’s exactly what John does and, before he knows it, she’s running his life and he’s quite happy to let her get on with it while he writes his book.  Which means he’s blissfully unaware that the relationship is going downhill and that Maggie, despite wanting to run things, is also feeling taken for granted.

Miller’s taken inspiration from a couple of cinema favourites.  A self-confessed fan of Preston Sturgess, there’s definitely a sense of the 1940s screwball comedy about it.  And her affectionate portrayal of suburban New York has hints of Woody Allen.  It’s also a gentle satire on academic life, with both John and Georgette lecturing in ficto-critical anthropology.  Made up?  No, it really is a genuine academic subject, as is John’s speciality, commodity fetishism.  Whatever that is.  Maggie, on the other hand, isn’t an academic and doesn’t fit into their tight community.  Although she works at the same college, her job involves helping students to market their own business ideas.  A bit more down to earth than ficto-critical thingy.

It goes without saying that the performances are universally terrific.  Hader and Rudolph stand out as a double act, and Julianne Moore is stellar as Georgette, initially the more obvious control freak and with almost a reptilian air about her.  Gerwig’s usual quirkiness is more understated than usual, allowing her to dig deeper into Maggie’s quietly controlling character.

“Maggie’s Plan” isn’t a comedy that will have you rolling in the aisles.  But you will have a smile on your face throughout the film as it charms, tickles and hits all its targets with unerring accuracy.  It’s witty, sharply observed and nicely paced and, with such a great cast and a pithy script, it all goes beautifully to plan.  Maggie’s and Miller’s.

The Legend of Tarzan