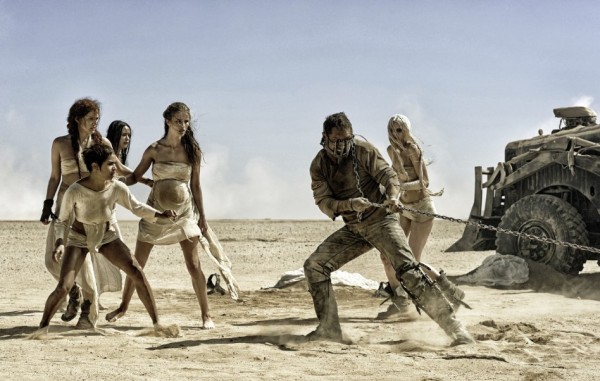 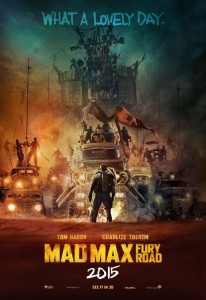 A no-nonsense ‘Road Warrior’ in a decadent apocalyptic wasteland. A one-man crusade to restore balance in a morally unhinged world. 30 years on since Tina Turner’s Aunty Entity’s adamant anthem ‘We Don’t Need Another Hero’. With the current Hollywood landscape saturated in superheroes and the era of Mad Mel a distant memory… do we need Mr Rockatansky?

Its title may promise fury, but the rocky road back to the big screen for George Miller’s iconic protagonist has been far more laborious. The terrible terrain of its outlandish locations forcing lengthy delays, leaving its versatile director with itchy rather than happy feet. Yet as Nicholas Hoult’s Nux has often teased, a ‘lovely day’ was always looming..

First Bane. Now Mad Max. Growing terribly fond of facial apparatus and haunted by his own personal demons, Tom Hardy’s anti-hero begins his latest adventure chased down by the pale-faced powerhouse army known as the War Boys. Whom are under the Citadel rule of Immortan Joe (Hugh Keays-Byrne), a tyrant limiting the essential supplies craved by the city’s long-suffering inhabitants.

With the luxury of a trustee war rig and the hopes of escaping such a demoralising world, the tough-talking skinhead Imperator Furiosa (Charlize Theron) shares Max’s lust for order. Eager to return to the homeland of her childhood often referred to as ‘The Green Place’, whilst providing refuge for others (Rosie Huntington-Whiteley’s Angharad most notably), it triggers a relentless pursuit across the deserted outback.

‘Mad Max Fury Road’ is an exhilarating counterpoint to a concept that has grown comfortable in convoluted narratives and merely forgettable CGI heavy set-pieces. It may be anchored by a beloved character with a built-in fan base, but this is a blockbuster ballsy in its risk-taking.

Positioning itself as a two-hour prolonged chase, Miller orchestrates an immersive destruction derby that for all its furious spectacle, retains a remarkable sense of control allowing the audience to savour the vehicular mayhem. From the nightmarish awe of its thrilling tornado sequence to the thrilling conclusion bringing new meaning to ‘Guitar Hero’, ‘Fury Road’ possesses a harsh imaginative beauty to accompany its explosive brutality.

For all its artistic flourishes, it’s the film’s striking and crowd-pleasing politics that impress most. A lean narrative with a script sparse on dialogue, the film’s potent themes emerge with a telling look or an exquisitely captured shot of defiance. The austerity of its people. The appalling mistreatment of its women, as they lead an uprising. It’s as much a commentary of our own grounded reality as it is about a lingering issue in mainstream Hollywood.

Filling the boots of Gibson, Hardy’s Max is one of great subtlety as the proven steel of the eyes and vivid flashbacks of the past drive his character arc, rather than long-winded narration. A deranged desperation fuelling his character, in Nicholas Hoult’s Nux lies a brilliantly played child-like innocence. But it’s the ferocious empowering presence of Charlie Theron’s one-armed warrior ‘Furiosa that is the perfect vessel for Miller’s feminist subversion.