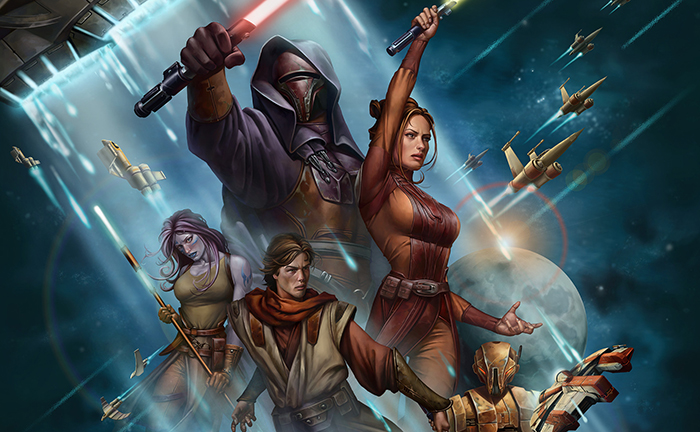 Lucasfilm head Kathleen Kennedy has confirmed in an interview with MTV that the company is working on a project set during the so-called ‘Old Republic‘ era.

“Knights of the Old Republic, a lot of fans want to see that, is there any development of that?” MTV reporter Josh Horowitz asked Kennedy during Star Wars Celebration Chicago.

“You know, we talk about that all the time,” was Kennedy’s candid reply, “Yes, we are developing something to look at. Right now, I have no idea where things might fall [with regards to TV/film], but we have to be careful that there is a cadence to Star Wars that doesn’t start to feel like too much. We don’t have a crystal ball, you know, we tried a little bit with Solo to see if we could do two movies a year and whether or not there really was an opportunity for that, and we felt that’s not going to work. So, we back off of that a little bit. But it doesn’t mean we don’t think about lots of different stories, because that’s the exciting thing about this universe.”

Now, whether or not there is an argument to be made that it sounds like Lucasfilm has learnt the wrong lessons from 2018’s Solo: A Star Wars Story – most would agree the issue was the release of an average adventure film which recast a key, iconic character from cinema in a story many general audience members considered superfluous, as opposed to the release window merely being too close to The Last Jedi – but alas, that’s neither here nor there. The concept of an Old Republic project, be that a Disney+ series or a sequence of films, is still undeniably exciting to long-time Star Wars fans.

For the uninitiated, Star Wars: Knights of the Old Republic was a supremely successful and tremendously popular role-playing video game which takes place in the Star Wars universe approximately 4,000 years before the rise of the Empire (but, you know, one of those fictional historical periods where everything looks largely the same as it will in the future), and told a rich, involved narrative which allowed players to become either a Jedi or a Sith. Think Game of Thrones in space, and you’re not far off.

As such, it’s probably merely a coincidence that Game of Thrones showrunners David Benioff and D. B. Weiss were officially hired by Lucasfilm to begin development on a trilogy of films last year.

Iron Man director Jon Favreau’s live-action series The Mandalorian will be the next Star Wars project up for release, launching November 12th on Disney+, and will be followed by JJ Abrams’ Star Wars – Episode IX: The Rise of Skywalker on the 19th of December.

John Cena On For James Gunn’s The Suicide Squad