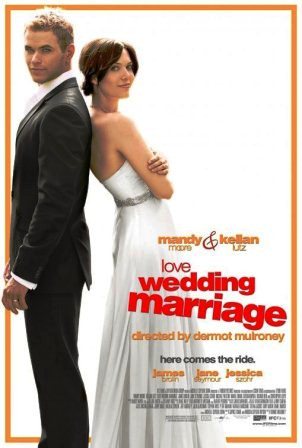 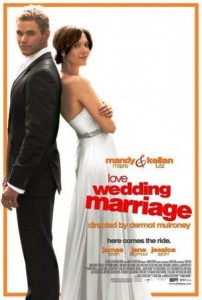 Love Wedding Marriage is a terrible movie that shows us the life of a newlywed couple in the weeks following their wedding. During this time Mandy Moore’s character – I don’t care enough to remember what her character’s name was – finds herself in the middle of her parents’ divorce. She begins to lose faith in the institution of marriage upon learning of her father’s infidelity and her husband’s past mistakes.

The reason I am taking the time to write about this completely insignificant movie is that it contains a joke. The joke is not a good joke. It is the worst joke. The worst joke ever. See for yourself:

Yes, yes, I agree. But calm down and let me give you some background information. We come in after Mandy has found out that Kellan Lutz, the aforementioned newlywed husband, was married once before, and that his marriage was the result of a drunken night in Vegas. Incredibly original. So Kellan is futilely trying to explain what happened with his first marriage to Stupid Mandy. He’s talking about how the marriage was annulled and legally the marriage never really happened. What matters to me and should matter to you is the botched attempt at humor these two actors and a team of writers put forth.

He starts by explaining the marriage decision with, “I was 22.” Alright, I’m with you. You were 22 years old so your spontaneous marriage is somewhat excusable. Mandy fires back with, “That’s old enough to know better.” Again, I’m with you, but let’s point out that 22 is a lot more youthful than it used to be. “Technically, it’s only 2 times 11.” Jesus. First of all, it’s not technically 2 times 11, it just is 2 times 11. And secondly, that has nothing to do with anything. Why did he say that? It isn’t a joke. It doesn’t provide any new information that would potentially help Kellan get out of the dog house. This alone is a disgusting exchange. But it is made much much worse when Mandy tosses in her response: “In what, guy years?”

Oh no. No. What is that? She isn’t responding as if Kellan’s comment were a joke, she’s responding as if he made an mathematically incorrect argument. She’s mocking his math. To be more specific she’s mocking the units he’s using, in the equation that he has presented, for the reason he got drunk and got married in Vegas. This is something so stupid, that it actually can not completely be understood by a fully functioning brain. I was trying to breakdown the logic game these two were playing and I found my mind mucked up with some sort of stupid goo.

In this interest of making this some sort of review, Love Wedding Marriage is a bad, bad movie. The acting is terrible, the jokes are terrible, and the story is terrible. Do not see this unless an insistent female with a 50% or greater Might-Have-Sex-

With-Me-Quotient demands you watch this together. Make sure to not give her your telephone number, and tell her that you’ll call her. Don’t call her.

Love and Other Drugs