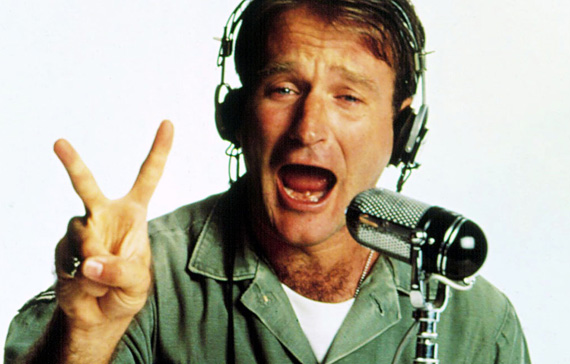 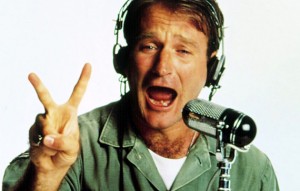 A comedic force of nature whose broad appeal defied a modern era saturated in foul-mouthed frat-packs, prompting a consistent ratio of tears of laughter and joy from his dedicated audiences. In the early hours of Tuesday morning, the tears shed only consisted of overwhelming sadness.

Provoking such hysterics. Yet crippled by the inner trauma that tormented his soul. Robin Williams was an exceptional ‘one-off’ whose incredible gift for executing wonderfully zany humour at a relentless rate, made him a beloved hero of mine in my formative years. I can honestly say, that I can’t recall an actor who has put a smile on my face or tickled my funny bone as frequently as Robin.

Perfecting his craft in the 70’s sitcom ‘Mork And Mindy’, much of his subsequent, brilliantly mature work in the 80’s as riotous DJ Adrian Cronauer in ‘Good Morning, Vietnam’ and the inspiring English Professor Keating in ‘Dead Poets Society’ initially evaded my eyes. As you would suspect, it was the heart-warming family-friendly fare that immediately struck a chord. 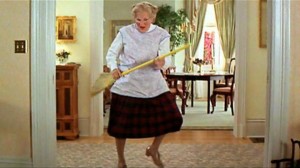 From playing the popular ‘boy who never grew up’ Peter Pan in Steven Spielberg’s ‘Hook’, to embracing the medium of animation as Disney provided him with a fitting larger-than-life role as a hilarious Genie in ‘Aladdin’, it was the Scottish cross-dressing housekeeper ‘Mrs Doubtfire’ that predominantly consists of the fond, early memories.

Hotdog impressions. Run-By Fruitings. Busting out side-splitting rhymes which I often quoted in my youth (I’m a hip old granny who could hip-hop, bebop, dance till ya drop and yo, yo, make a wicked cup of cocoa). Yet it was the perfectly-pitched sentiment of its closing speech as Williams’ Doubtfire fills the TV screen as Sally Field’s Miranda, philosophical about the idea of family and how the distinct differences never dilute the love and tarnish the ties we have, that brought the greatest comfort to me.

Too early to appreciate at such a tender age on first viewing, it was the combination of sublime Oscar-winner ‘Good Will Hunting’ where he endorsed the scriptwriting/acting talents of Ben Affleck and Matt Damon, along with the fun flamboyance of ‘The Birdcage’ alongside a gloriously camp Nathan Lane that truly opened my eyes to the underlying versatility of Williams’ talents. A laugh-out-loud ‘man up’ sequence as the bickering couple panic over impressing a right-wing Gene Hackman. Reining it in, in a mesmerising scene in the park with a cocksure and intelligent Damon as he berates the idea of one totally knowing his character through a painting. At a more measured pace, we were exposed to the inner depths of his undeniable talent. 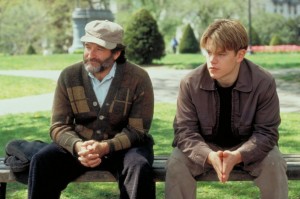 More aware of his range, Williams in his latter years treated us to a sensationally subtler and sinister side that equally unnerved and compelled. Thanks to the directorial talents of Mark Romanek and Christopher Nolan, his creepy obsessive photo technician in ‘One Hour Photo’ and chilling novelist in thriller ‘Insomnia’ were a stunning showcase and measurement of just how far Williams had come since his stand-up days.

Never too shy to self-deprecate his previous troubles, yet ultimately a defence mechanism to hide away the pain. A heart-breaking reminder that for all his one-liners.. Depression is no joke. The death of an extraordinary talent shouldn’t be the push to put it under fierce scrutiny.

How we wish we could be the Genie who could grant him the wish of healing him of any torment. The security guard spending a ‘Night At The Museum’ willing him to come to life.

Robin Williams. All my love to you poppet. Bye bye. x 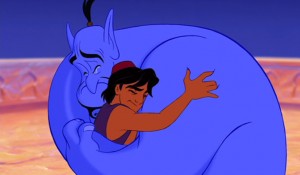 Five Films To Watch If You Enjoyed Guardians Of The Galaxy

The Expendables Effect: Why the Action Franchise is a Comeback Cure-All for Aging Movie Heroes