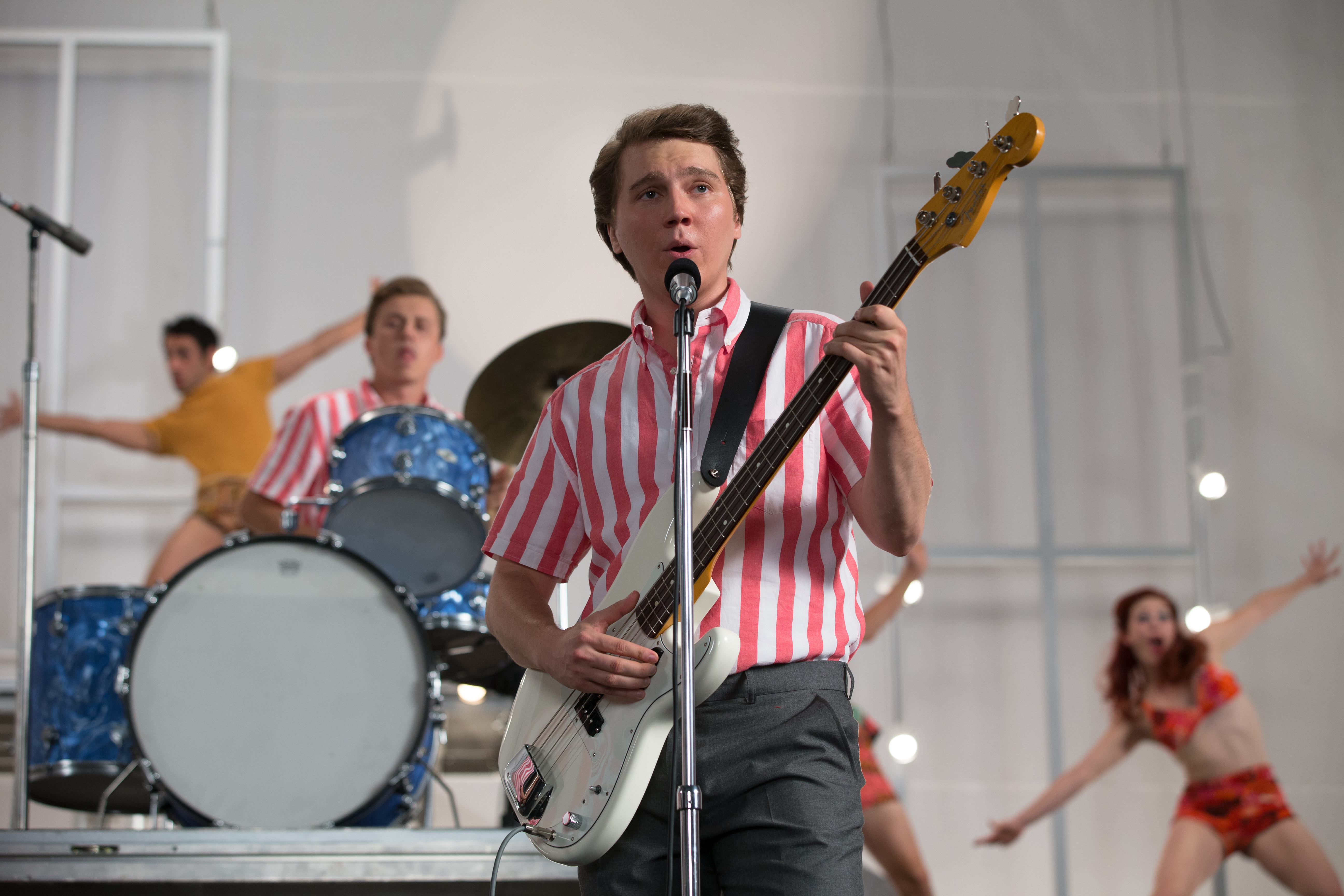 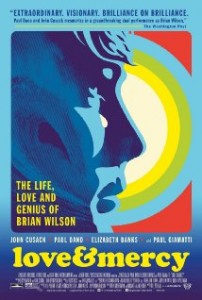 It may have been pre-ordained that I was going to somewhat adore Love & Mercy given my track record with music biopics, but it should be stated up front that this is not a Beach Boys film, but more a pure character study of the man considered the brainchild of that iconic band. The Beach Boys were never a group I paid especially close attention to given the height of their fame was in the mid-sixties when my parents were barely learning to walk, but their music is not necessarily so much timeless as it is lasting and somehow always manages to integrate itself into your consciousness at some point in your childhood. After all, you only need to hear their songs once and with the melodies being as catchy as they are you’ll be repeating them days later even if you didn’t realize you were listening to them. The summer and sun phase of The Beach Boys is what they’re best known for, but if Love & Mercy has anything to say about this it’s that these songs were hardly the best examples of what type of symphonies were taking place in Brian Wilson’s head at the time. In the truest sense of the words this is a character study that takes a character at two vastly different points in his life and finds the correlation in how they are connected by the same being. Like the subject at the center of it, there is something inherently soulful about the film. It never plays into the trappings of a musical biopic because, if nothing else, Wilson’s quest was to try and figure out how to participate in the music business without having to deal with all the extra responsibility that comes along with it outside of simply creating the music. Wilson wanted nothing to do with the aspects of the business that were simply existent to fuel ones ego or for instant gratification. Instead, Wilson simply made music in order to get it out of his mind and onto the vinyl so that he might have a record of his creations. More than this even, the music was an expression of his feelings and most of the time, was the only way he was able to accurately express them at all. It is in this realm of thinking that writer Oren Moverman (I’m Not There) and director Bill Pohland zero in on Wilson’s state of mind and how it influenced this style of a generation and where that mind went once everyone else stopped paying attention.

Beginning with a solitary shot of a young Wilson (Paul Dano) sitting at his piano we see the beginnings of what would come to be labeled as schizophrenia as Wilson responds to the voices he claimed to hear in his head. Pohland then cuts to a silhouette of a much larger figure laying still in a rather elaborate bed. This glimpse shines a brief light on the stage between the two time frames being documented in the film for as Wilson was plagued by alcohol, marijuana, cocaine and LSD abuse he grew obese and spent the better part of three years in bed and much of the decades following the sixties in relative seclusion. When we meet Wilson in what we are led to believe are the early nineties where he is played by John Cusack he’s doing little more than considering purchasing a Cadillac. He seems to hit it off surprisingly well with the saleswoman, Melinda Ledbetter (Elizabeth Banks) with whom he has a short, but honest conversation with inside the car Wilson eventually decides to buy. From here, Pohland takes us back and forth between the struggles of Wilson fighting to make the kind of music he feels he needs to produce despite the resistance of his family and bandmates Mike Love (Jake Abel) and brothers Dennis (Kenny Wormald) and Carl (Brett Davern). As Dano’s version of Wilson wrestles with the best avenues to create his music while seeking both the perfect environment to create such masterpieces as well as the approval of his abusive father, Cusack’s Wilson is simply trying to get Melinda to go out on a date with him and regain some normalcy in his life. It is this ever evading approval from his father that drives Wilson to a mental breakdown while the recovering Wilson of the early nineties is still attempting to put himself back together from this fallout. Unfortunately, a psychologist by the name of Dr. Eugene Landy (Paul Giamatti) has been assigned to help Wilson get better and while the drug addiction has been kicked and the weight lost it’s clear to Melinda that Landy is doing little more than crippling Wilson further in favor of his own personal gain.

There seem so many avenues in which to take the discussion of Love & Mercy as I genuinely have a soft spot in my heart for any film based around the process of making music and one that takes the particulars of this process into account, but what is almost more intriguing here is how Wilson came to feel so motivated to make the music he did-the music that has garnered him critical acclaim and credits as one of the greatest songwriters of all time. It is made clear Wilson and his brothers didn’t have the smoothest of childhoods and that in fact Wilson was 96% deaf in one of his ears because his father hit him across it so often when he was younger. In one of the many quietly moving scenes with Dano’s version of Wilson though we come to see that he recognizes the value in his nurturing. While admitting his father, Murry (Bill Camp), was nothing short of a competitive man he recognizes that he likely scared him into making good music and that while much of his childhood might be considered rough there was always music playing and that he would turn to this music to escape the pain of his everyday. This inherently damaged state of mind almost inevitably leads to an alternative way of thinking and approaching things that in turn produces what will allow him to prosper. The question is would Wilson have traded his abusive childhood for normalcy in exchange for the success he would experience later on in life? Selfishly, would he rob the world of the motivated mind that created his art for what could easily be described as a simple life? It’s the question the Cusack portions of the film strive to answer: can Brian Wilson have his cake and eat it too? Naturally, we root for the guy to be able to come back from whatever it might be that’s making him wail in the aisle of airplanes, play his grand piano in a sandbox or, again, claim to hear voices in his head, but we also understand it is in this state of mind that some of his genius nests soundly and so how does the balancing act work? This discussion of course raises more questions than answers, but that is the magic of Pohland’s film as it doesn’t so much deliver on the mystery of what connects it’s two timelines, but rather thrives on the cause and effect that is ultimately responsible for our subjects greatest creations and achievements.

It is difficult for me to believe people are unable to be self-aware to some degree and so when Dano’s performance begins to send Wilson off the deep end there is a moment where I have to roll my eyes and know that deep down somewhere this guy had to realize the reasons he was feeling the way he was and how he might come around to correct that behavior before taking it too far in one direction. Part of you wants to tell him to get another hobby because he clearly has so much time on his hands that his thoughts are consuming him, but of course, if you know the story of Brian Wilson beforehand you know his stature doesn’t exactly put him in a position to simply get better, but instead invites something of a legal guardian in Landy to handle his affairs while at the same time feeding him so much medicine that he can barely function. The logic of it, while initially hard to take seriously as it seems more showy (as in, “look at me, I’m a genius because I’m weird!”) than genuine in its depiction of mental illness, comes full circle thanks to the complimentary performances of Dano and Cusack, but just as importantly is the completely charming turn from Banks that makes us believe, without ever second guessing, that Melinda is there to protect Brian and that taking advantage of him never crossed her mind. As Landy, Giamatti has almost as much scenery to chew as Dano and he turns on his typically intimidating vernacular and presents the kind of overbearing and crippling attitude that gives Melinda the motivation to do what she cannot avoid in a compelling fashion. The dueling narratives, the fantastic performances, the obviously stellar soundtrack and the subdued tone are all in service to the understanding of the psychology of Brian Wilson’s songs though and figuring out if we, as an audience, have enough depth to wander into the deep end with Wilson or if we are too shallow to understand. Granted, soaking in his layered and textured compositions can do nothing but make you appreciate the authentic genius that wrestles beneath the surface. Love & Mercy isn’t a great film because it hits monumental highs that solidify it as such, but it is great because it is fascinating throughout due to the fact it really understands its subject and therefore makes us feel we do too.