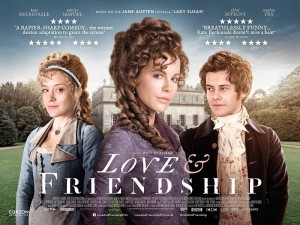 If imitation is the sincerest form of flattery, then parody isn’t far behind, especially if the target is Jane Austen and the director is Whit Stillman.  His fans have been waiting for his take on the 18th century’s novelist of manners for years – apparently he first started work on the project in 2004 – but if they were expecting he’d tackle one of her major works, then they’re in for a change of direction.  Not that they should be surprised.

Love & Friendship is based on an early Austen novella, Lady Susan, which didn’t actually see the light of day until well after her death.  The characters from the original remain the same, from the titular Lady Susan Vernon (Kate Beckinsale) all the way down the social scale.  A widow without much in the way of inheritance, she takes up temporary residence with various members of her family, while trying to find a suitable husband for her teenage daughter, Frederica (Morfydd Clark).  And, of course, she needs to feather her own nest as well.

Right from the start, it’s apparent that Lady Susan has a profound effect on everybody around her, especially the men.  She’s making a hasty departure from the Manwaring family’s country estate, leaving the ladies in tears and Lord Manwaring in more distress than his wife.  Why on earth could that be?  As we soon discover, she’s not only lacking money, but is totally unencumbered by anything resembling morals or virtue, flirting with just about every man she meets and then discarding him.  In fact, she doesn’t like men very much at all, as is made apparent when she’s out walking with her friend Alicia (Chloe Sevigny) and is approached by a man who clearly knows her.  She dismisses him angrily, declaring she’ll have him horsewhipped if he doesn’t leave her alone.  Alicia wonders if Susan knows him.  Of course she does.  She “wouldn’t speak like that to somebody I didn’t know!”

Cue the first big laugh-out-loud moment of the film, and there are plenty more to come.  Strangely, though, Stillman is almost coy about the humour in the early stages of the film: the one-liners are so understated they nearly pass unnoticed.  They’re more like a warm-up act for the laughs in the rest of the film, which get progressively bigger, better and louder.

The dialogue is superb, rapier sharp and lightning fast.  But the film isn’t all about words and has some genuinely comic moments, many of them at the hands of the glorious stupid Sir James Martin (Tom Bennett).  Any similarity with a TV chef is purely coincidental.  Initially, he’s seen as a suitor for the neglected Frederica and is described as a “blockhead” and a “rattler” by the others.  He’s also an absolute scream with his big toothy grin, while the gaping chasm between his ears means he isn’t just dense, but blissfully ignorant of other people’s feelings.  His arrival with Lady Susan at the home of Mr and Mrs DeCourcy (James Fleet and Jemma Redgrave) is greeted by looks of stunned anger and astonishment from the whole family.  But he’s overjoyed by the wonderful family picture in front of him.

Bennett avoids falling into the trap of over-cooking his role – it would be all too easy – and delivers a joyous piece of comedy acting.  By way of contrast, Kate Beckinsale is elegantly flint-hearted as the socially ambitious Lady Susan, delivering some wonderfully callous lines as if they were completely acceptable.  And she is never, ever to blame for anything.  She’s also stunning in her gowns, which are genuinely beautiful.

Stillman’s given us an entertaining romp around the upper middle class of the 18th century and there’s the definite sense of him enjoying himself.  His love of the literature of the period is reflected in the way that he introduces the characters as they appear on screen: copperplate captions and a few words on where they fit in.  It harks back to the family trees so familiar from the pages of novels from the era.

Anybody who loves a bit of literary fun will be in their element with this, as will Stillman and Austen fans.  While it’s most definitely a parody, it’s also the most intelligent and refreshing Austen adaptation we’ve seen for some time.  With the bonus of laughs.