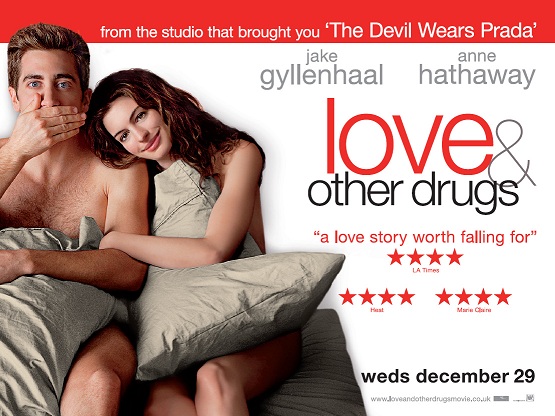 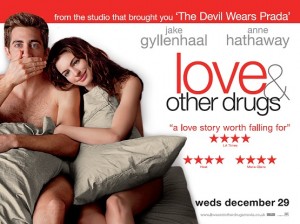 Directed by Edward Zwick of Legends of The Fall and Defiance fame, Love and Other Drugs stars Jake Gyllenhall as Jamie Randall, the charming but relentless pharmaceuticals salesman and Anne Hathaway as the young, free spirited sufferer of Parkinson’s disease, Maggie Murdoch.

Randall (Gyllenhall) goes through life bedding numerous women until he is offered a job working for a major pharmaceuticals company, on the verge of a major breakthrough. While on the road selling his product he meets Maggie (Hathaway) during an examination for her Parkinson’s disease. What begins badly between them soon takes a turn for the better as he wears her down into going on a date. While the pair are positive that they are only after the physical side of love, each finds it harder to conceal their true feelings.

Love and Other Drugs seems to be a typical run of the mill rom-com, Bad boy meets love of life and changes for her. However once you take away the glossy sex filled exterior you are left with the makings of a serious film. This element is what the film excels on, its ability to switch from one moment being a typical innuendo comedy to being a deeply serious and moving film. Anne Hathaway is fabulous as Parkinson’s sufferer Maggie and despite her belief in her own ability to love, we see how her despair and the idea of ruining a loved one’s life through her disease is what constantly plays on her mind and periodically ruins her chances of happiness.

The film enjoys some excellent performances from the leads Gyllenhall and Hathaway whilst also enjoying some impressive appearances from Hank Azaria as Maggie’s doctor as well as rival salesman Trey Hannigan (Gabriel Macht).

The shooting of the more intimate scenes is tasteful, including Anne Hathaway’s major nude scene from the trailer, the sensitivity in which these scenes are portrayed seems to differ from the set-up the film originally displays. It is this jump from comedy to reality that makes the film unique to others in its genre. Randall’s character transformation is well handled and we see in the latter stages of the movie just how much when he almost fully resorts back to his former self.

The overall experience this film offers is conflicting, while I found myself becoming frustrated with some of the earlier scenes towards the finale I found myself engrossed with the distinct atmospheric change. While one may see this as the films strength, it can also be viewed as its downfall; it’s almost as if the first 30-40 minutes was shot with a different director before Zwick took over for the more emotional finale. If the films comedy element had been consistent with its romance/drama element it would be a near perfect example of how to make a Rom-com.

With an effective soundtrack to accompany the mood the film did well to surpass the expectations I had before viewing. However as mentioned, the lack of consistency between its major elements let it down in the first half. It does well to bring the audience back for the second half. With some clever use of history and well known ‘performance enhancing’ drugs the film has substantial depth that is missing from other similar films. The deterioration of Maggie through the disease can be genuinely distressing to watch but riveting nonetheless.

While Love and Other Drugs may seem like just another romantic comedy, watching it is by no means a bitter pill to swallow.