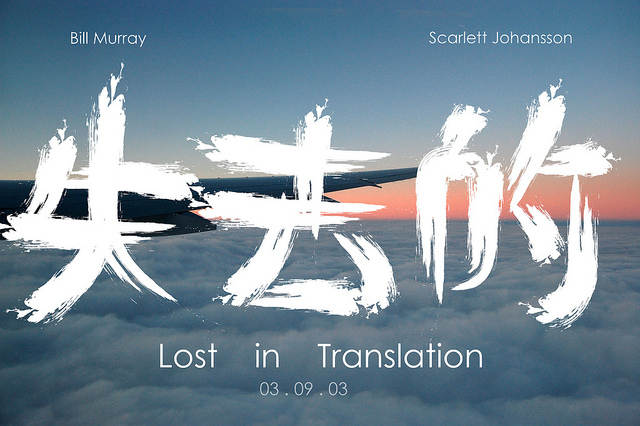 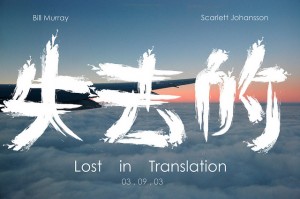 Bill Murray and Scarlett Johansson star in Lost In Translation. As Two Americans in Tokyo for different reasons, Bob (Murray) and Charlotte(Johansson) form an unlikely friendship through their insomnia. As they both question their lives and relationships, they seek each other out and share a series of adventures into the city of Tokyo together.

A romance film disguised as a comedy is how the movie sells itself. Though almost instantly there are more touching moments than moments of hilarity. Director Sofia Coppola follows her usual trend of unusual opening shots, in this case 20 seconds of Scarlett Johansson lying partially clothed on a bed. While it seems an odd opener, it becomes significant of the loneliness Charlotte feels as her workaholic husband continually leaves on business in the city. Bob on the other hand, is a well known movie star in Tokyo to shoot a whiskey advert. While their friendship blossoms, I found it a nice touch that Charlotte and Bob do not talk about his fame or money, merely enjoy each-others company in the strangest of ways.

The performances by the two lead characters are almost perfect, awkward and unusual at times, the development of what the audience can perceive as love between the two is never backed up by visual evidence. Murrays half serious, half comedy role is perfectly suited to him and he delivers a stellar performance. Johansson, many years his junior matches his performance in different ways. Neglected and lost, The chemistry between the two is flawless, as good an onscreen pairing I have seen in any movie. The film focuses on this, like I said we all assume they are falling in love, however both married neither is willing to risk making the first move and the tension created is truely mesmerizing.  The back and forth between the two is also brilliant and at times genuinely funny, rolling of each other and seemingly reading each other’s minds further reinforces the notion of ‘star crossed’ lovers.

The film is shot beautifully, completely on location in Tokyo- the buildings, streets and fashions are a blur of bright colours and lights. The outside is so surreal the personalities of the main characters are a stark contrast to the fast paced world going on around them.

I can see why people aren’t thrilled with this film, the slow build up of the relationship can have the adverse effect and cause people to lose focus and interest. The jokes won’t be to everyone’s taste and the cultural references may be lost on some audience members. However a film that pleases everyone is a very rare thing and Lost In Translation is certainly a film that will surprise most people.

In terms of comparing it to a similar film, the closest in terms of content is (500) Days of Summer. The off-beat romance/comedy style features in both and as such, Lost in Translation is certainly a refreshing change to a stale genre.  At 8 years old its content is still relatable and this helps to enjoy the film that little bit more. If it stands the test of time remains to be seen, however the strength of the acting and high calibre of directing makes this a film worth watching.

Love and Other Drugs