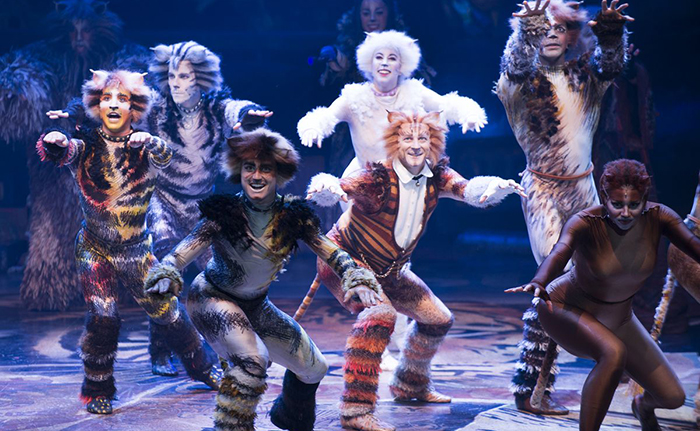 Director Tom Hooper (Les Misérables) has kept relatively schtum on the subject of his forthcoming adaptation of Andrew Lloyd Webber’s West End musical Cats (itself an adaptation of Old Possum’s Book of Practical Cats by T. S. Eliot), but after a brief panel at CinemaCon in Las Vegas this week, we now know some further tidbits… and they’re fascinatingly bizarre.

The feature is, for starters, being filmed entirely on practical sets. That’s not in itself a bad thing, but it’s the scale of those sets which is more-than raising a few eyebrows. See, the sets will all be designed to resemble a stylised version of our world, but three-to-four times bigger than real life, so as to give the performer’s “a cat’s eye view.” In effect, essentially utilising forced perspective to ‘shrink’ the actors.

Furthermore, the star-studded cast which includes Idris Elba, Rebel Wilson, James Corden, Taylor Swift, Jennifer Hudson, Jason Derulo, Sir Ian McKellan, and Dame Judi Dench, will not be trussed up in the iconic, skin-tight lycra catsuits of the stage, but will instead be turned into bizare human-cat hybrids via the act of performance-capture CGI – think the Na’Vi from Avatar, but furry.

Cats, the musical, centres around a tribe of cats called ‘the Jellicles’, and follows them on the night they initiate the ritual of the “Jellicle choice”, in which they collectively decide which cat will ascend to the ‘Heaviside Layer’ (a metaphor for heaven) and eventually be reincarnated. The play is the fourth-longest-running show in Broadway history, and the sixth-longest-running West End show.