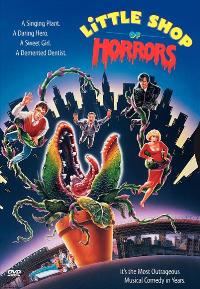 Just coming around to its 25th aniversary, in 1986 director Frank Oz, treated us to the guilty pleasure that is the remake of Little Shop Of Horrors. Rick Moranis is Seymour Krelbourn, a nerdy assistant in a struggling flower shop owned by Mr Mushnik (Vincent Gardenia) in Skid Row.

Seymour seizes the chance for success and romance when he discovers an unknown plant which generates considerable interest from passers by of Mushnik’s shop. The plant is named ‘Audrey II’ after Audrey (Ellen Greene), the blond and at times rather pneumatic object of Seymours affection who is seen with the local and rather sadistic dentist Orin Scrivello, DDS (Steve Martin) who appears to leave Audrey with a black eye early on.

The interest in Audrey II heightens with Seymour being interviewed by radio DJ Wink Wilkinson (John Candy), and the strong cast is joined by James Belushi who thinks that commercially Audrey II should be America’s next great thing with every home having one. and Bill Murray as a rather masochistic patient of Scrivello who willingly asks for a root canal!

As Audrey II growth continues, cause for concern hits Seymour as the plant seems to be wilting. A rose thorn in Seymour’s finger provides the very welcome feed to revitalise the plant, which voiced by Levi Stubbs of The Four Tops starts talking making its blood thirsty ways very plain to see.

Little Shop Of Horrors is played as a Musical and the sets and presentation are beautifully done, bordering on camp in its implementation. The musical numbers are wonderful and are actually all performed by the actors in the scenes. Highlights being Scrivello’s Dentist Song and Audrey II’s ‘Mean Green Mother From Outer Space’ especially the latter which is high energy and builds the film up to its finale very convincingly.

Moranis proves that he is comfortably adaptable to the Musical role with controlled performances of his musical numbers, as is Steve Martin, Greene’s high pitched voice actually detracts slightly, becoming a little irritating after a while but star of the show is definitely Levi Stubbs solely on the energy he put into the role of Audrey II