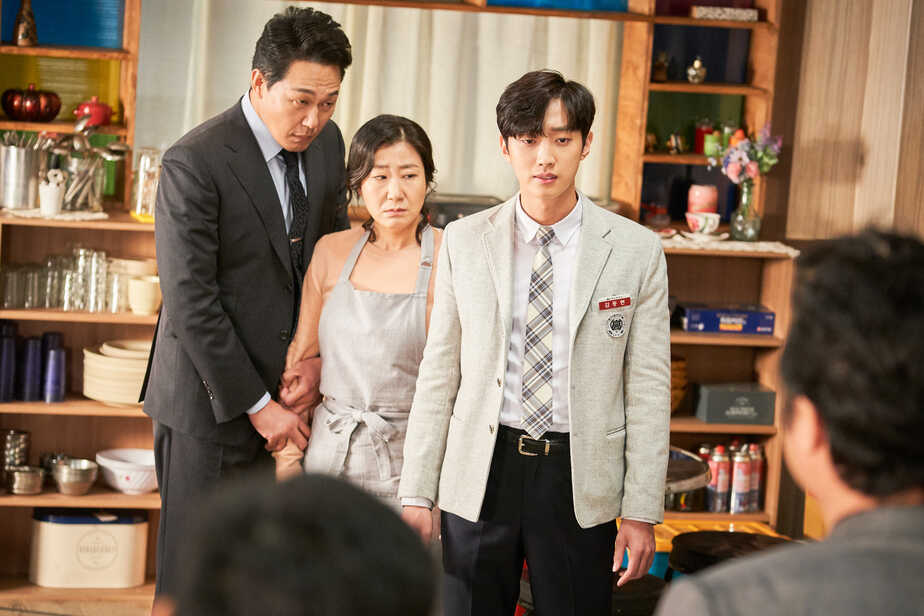 Well, darn it if the Koreans don’t continue to demonstrate that they can make top-notch films in just about any genre. Kang Hyo-jin’s fifth feature, the comedy The Dude in Me (aka The Man Inside Me), is a fun iteration of the body-swap genre, chockfull of engaging characters, martial-arts action, humour and heart.

Possibly unbeknownst to most Western audiences it also has the advantage of featuring K-popstar, Jung Jin-young of the Boyband B1A4. Jung Jin-young has the, not insignificant, task of playing three separate major characters: the nervous, tubby teen Dong-hyun; a tough-guy gangster Pan-soo (trapped in Dong-hyun’s body); and the svelte, handsome hunk that the ugly-duckling Dong-hyun ultimately turns into. Fortunately, Jung manages to rise to the occasion and pulls off three convincing performances.

The Dude in Me initially takes on the conventional ‘bespectacled-nerd-body-switches-with older-dude’ formula and centres around the middle-aged, ‘entrepreneur’ and career criminal Jang Pan-soo (Park Sung-woong), married to the young and pretty, but petulant and unfaithful, daughter of a gangster crime lord.

When not sending his loyal right-hand-man Man Chul (Lee Jun-hyeok) off to intimidate local shop-owners, Jang Pan-soo spends his time eating healthily in good restaurants, being fussy about his clothes, sparring with local thug, ‘Boss Yang’ (Yoon Kyung-ho), and being confident in his fighting skills.

While paying a sentimental visit to an old haunt, a run-down ramen café, Jang Pan-soo inadvertently comes across a chubby teenage boy in thick black-rimmed glasses who gets on his nerves with his ineptitude. Soon after, Karma falls on him like a ton of bricks in the shape of the same boy falling off a rooftop directly on top of him.

Jang Pan-soo wakes up in a hospital bed and is shocked and horrified to discover that he has been transferred into a tubby teen body with poor eyesight, while his own well-toned adult body, now containing schoolboy Dong-hyun, remains in a coma.

As high-schooler Dong-hyun, Jang Pan-soo is devoid of his former prestige and respect and must defer to adults and teachers. He also finds that Dong-hyun is under daily attack from school bullies and his doting father is Jong-ki (Kim Kwang-gyu), one of the store owners who his thugs had intimidated into signing over his lease.

Nevertheless, it doesn’t take long for his true nature to emerge and the school bullies start to realise that they are messing with a very different Dong-hyun. He also finds that he has built a friendship with another victim at the school, a girl called Hyeon-jeong (Soo-min Lee), who he had tried to protect, and who he decides needs to learn some useful self-defence fight moves.

Further complications ensue when he meets the girl’s mother, Oh Mi-Sun (Ra Mi-ran) and when he finds that he needs the help of his former henchman, Man Chul, to foil a plot his wife has hatched in his ‘absence, along with her lover.

Although initially taking a conventional comedy premise, The Dude In Me goes on to offer a few surprises – the boy-girl relationship takes an interesting turn and although there is a love story, it turns out to occur where you might not expect. There is also the additional sub-plot of criminal intrigues and betrayals that Jang Pan-soo has to deal with while still in a high-school student’s body.

As in so many Asian films, the action scenes make it an especially fun watch and director Kang Hyo-jin is well versed in presenting funny yet exciting fighting choreography. He is also skilled at using just enough humour to highlight some of the problems of modern society such as corruption in business, social stigma, organised crime, bullying and body shaming, without seeming to lapse into didacticism.

Park Sung-woong is equally entertaining as the adult Jang Pan-soo, whose world literally collides with that of young Dong-hyun. Despite being a career criminal, he portrays Pan-soo as confident and tough, but with a conscience, and capable of displaying remorse and regret, while convincingly managing the transition to a frightened teen when he first awakes from his coma.

Korean society is strictly regimented by a social hierarchy of deference based on age and seniority, the very inconsistencies and misunderstandings inherent in body-swap comedies would inevitably generate laughter. Seeing a high-school student treat adults with the bravado and self-confidence of a gangster boss used to being listened to and obeyed, would cause amusement at the ridiculousness of such an unlikely situation.

The Dude in Me however, will be satisfyingly entertaining for any audience, and the film’s 122min runtime flies by. It’s not above playing for laughs, tugging at our heartstrings and treating us to some exciting action scenes, but the ultimate message of the film is clear – we need to embrace the true priorities of life – compassion, fairness, family, decency and honest hard work.