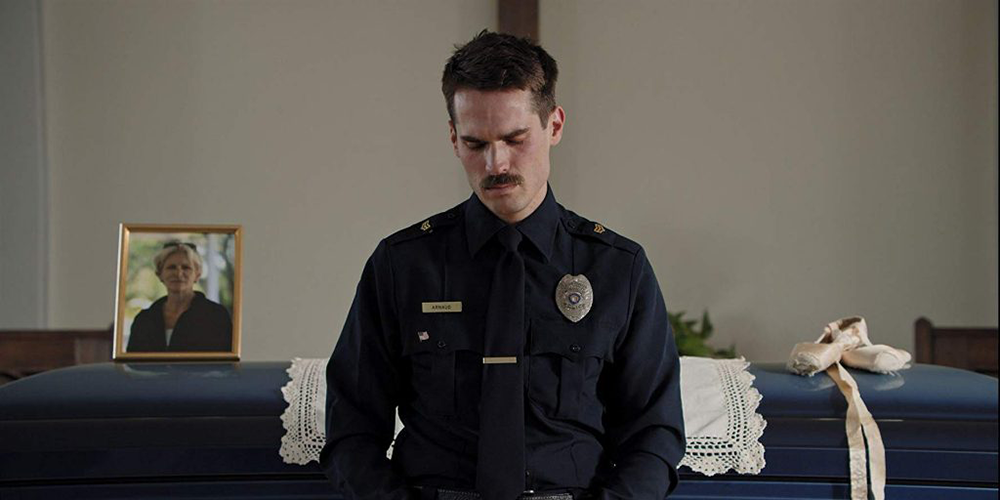 The loss of a loved one. It can so easily see you lose a singular or even every part of you, as you go through such a devastating process. Consumed by our own emotions. Yet comforted by the memories. You can never truly prepare for how grief takes hold and dictates your behaviour, with those on the outside possibly deeming certain acts or outbursts strange. Out of character.

Inspired by a Bruce Springsteen song. Jim Cummings’ tremendous tragicomedy ‘Thunder Road’ documents the compelling breakdown of a police officer struggling to enforce law and retain order in his personal life, whose sensitivity is continuously buried in a tough Texan landscape. Bristling with confidence and assurance in its tone right from the outset, Cummings plays officer Jim Arnaud who is a man on the brink, after the double blow of losing his mother and divorcing his wife Rosalind (Jocelyn DeBoer).

His emotional instability and fragile masculinity only feeding into his work. He continuously seeks refuge through fellow officer Nate (Nican Robinson) as he looks to defy his superiors, whilst desperately trying to maintain his relationship with darling daughter Crystal (Kendal Ferr), with Jim caught up in a battle for custody.

Providing a fearless take on male mental health. ‘Thunder Road’ is impeccable in its articulation of the feelings that litter the scattershot psyche of its core protagonist. Beginning with the astonishing opening one-take salvo of his eulogy at his Mom’s funeral, Cummings gradually draws you in with his confrontational directorial style, with the extremity of close-up complimenting the raw emotion on display. The emphasis on monologues and long-takes only heightens the drama and underlying hilarity, almost as if the viewer is serving as a therapist to Jim, looking to find clarity in his treacherous yet tragic trail of thought.

The film ultimately hinges on the capabilities and craft of its leading man. Jim Cummings is nothing short of outstanding here, striking the balance between frequent farce and ferocity with ease. His scenes with on-screen daughter Kendal Ferr full of disarming warmth. Awkwardness and deadpan humour filling the frames shared with an impressive Nican Robinson. For all his outlandish tendencies, Officer Jim Arnaud proves to be deeply relatable in how he navigates through the middling mess life can so often be.

Expanding on his initial Sundance-winning short film in superb style. ‘Thunder Road’ is a pulsating, profound directorial debut that isn’t afraid to take a few detours with its seemingly familiar narrative, resulting in a hilarious and heartbreaking journey that is truly unique.