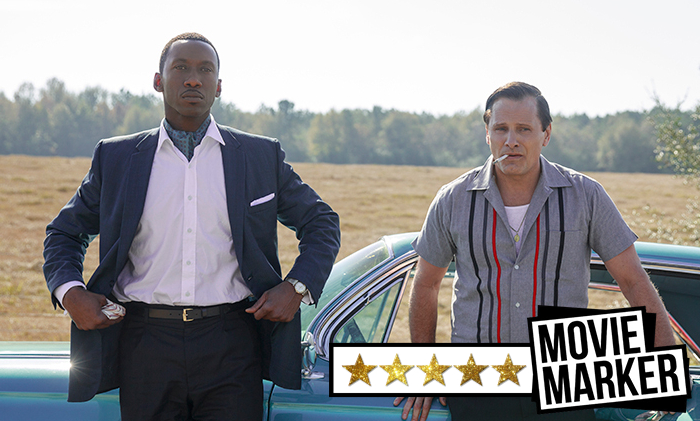 Dumb And Dumber. There’s Something About Mary. Me, Myself & Irene. For so many years, Peter Farrelly has been creatively joined at the hip with his brother Bobby, leaving audiences in hysterics with their wonderfully wacky and consistently gross-out cinematic creations. A feeling Stuck On You’s Matt Damon and Greg Kinnear will be all too familiar with.

Now he is turning the page and embarking on a new chapter alone with ‘Green Book’, marking somewhat of a departure for the director as he navigates us through the American South in the 1960’s, an area where racial inequality was deeply entrenched.

Enforcing his authority as a bouncer in a New York nightclub, Viggo Mortensen’s Tony Lip certainly lives up to his surname with his tough-talking demeanour. At first glance an unlikely candidate to be a chauffeur. His services are recommended to famous pianist Dr. Don Shirley (Mahershala Ali), a figure all too aware of the discrimination faced, whom is bravely looking to change people’s perceptions and hearts through a lengthy concert tour. With their contrasting characters it quickly becomes a battle of the refined and the ragged. The intelligent and the illiterate, only for a wonderful friendship between the two to be birthed.

A road-trip undoubtedly littered with peril, encountering despicable behaviour and attitudes along the way towards race and homosexuality, aspects of the film that are far from diluted in their severity. Yet it is quite the triumph from Peter Farrelly along with fellow scriptwriters Nick Vallelonga (Tony Lip’s son) and Brian Hayes Currie, that ‘Green Book’ is as light-footed and multi-faceted as it proves to be considering its subject matter.

Farrelly has transferred the shock and horror of his previous works into something more profound and timely, without completely compromising the comedic elements that made his name, making for an engrossing evolution in his direction which is impeccable here.

Making for a remarkable double-act, the efforts of its leading men are top-drawer. Filled with misconceptions and narrow-minded remarks himself in the initial stages, the execution of Tony Lip could so easily have been cartoonish and misguided. But Viggo Mortensen’s subtle mannerisms and character growth throughout the film is a joy to watch, dialling up the hilarity as he questions Shirley’s engagement with African-American culture, seemingly boiling it down to fried chicken and Little Richard.

Much to the dismay of Don who wrestles with the idea of whether he’s black enough as he does the bidding for wealthy white people. Remaining both dignified and defiant in his struggle as he feverishly captures the sheer sophistication of Shirley’s craft, whilst attempting to broaden Tony’s mind which delights his wife Dolores (a terrific Linda Cardellini), it is a stunning turn from Mahershala Ali.

Almost feeling like a throwback in its sheer warmth and performance. ‘Green Book’ is an irresistible crowd-pleaser.