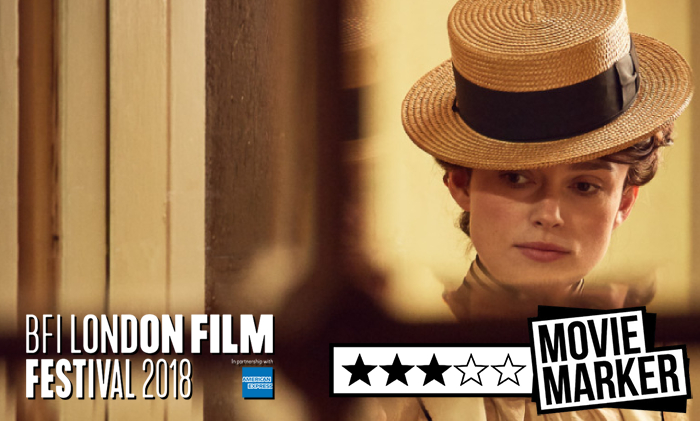 Born in 19th century France, Sidonie Gabrielle Colette wrote more than 80 volumes depicting her childhood, her life, her pains and pleasures. Her writings were sensual, vivid and all published under her husband name, “Willy”.

The film starts, the young country girl, Colette (Knightley), marries writer and critic Henri Gauthier-Villars (“Willy”) who introduces her to Parisian salons. Willy soon finds himself in debts and is desperate enough to seek his wife’s help. She will write. Colette writes what she knows and her first novella, “Claudine à l’école” (Claudine at school) is a success. Willy forces her to write the next ones, locked in a golden cage, to ensure his fame and success.

The settings are sumptuous and we gladly follow the camera through the stunning but confined Parisian apartments where the outside light only comes through when she feels inspired. Costumes evolve, as Colette, from heavy and restricted dresses to wild and daring clothing as if Mademoiselle Chanel had designed them herself.

Colette finally loosens from her husband and experiments with woman, society and dancing, feeding her inspiration. Forced and uncredited, Colette cannot enjoy writing and runs off to perform in the music-hall in her own name. In like most biopics, we go from one key event to another, regrettably quickly and often without knowing how we got there. Willy’s sudden appointment of his wife is left as unexplained as the abrupt ending that could have potentially seen Colette, a happy writer.

In the second part of the film Westmoreland seems more interested in looking at the awakening of a young woman rather than at the birth of an author whereas Keira Knightley shines in the lead role. Often known for playing the innocent and rebellious youth, Knightley still pulls off the young Colette in the first part of the film but is at her best when she evolves into a mature woman, aware of own desires. The best scenes of the film come when Colette is free and herself, usually in the company of other woman, particularly the terribly charming Missy (Denise Gough). Westmoreland multiplies two shots and close ups and creates impactful intimate scenes but regrettably gives up on them too fast.

It is a change to see a character such as “Willy” that is both ridiculous and loving. This duality creates, perhaps, a more truthful relationship between the two. No one is born an artist and behind every writer there is an intuitive editor (and in 20th century France, who else could it be than a man?). For Westmoreland if there is no Claudine without Colette, there would have been no Colette without Willy.

With its lavish setting and jumping plot, Colette can feel a tad velvety at times but is lifted by Keira Knightley’s sensual performance and liberating battle that painfully resonates today.