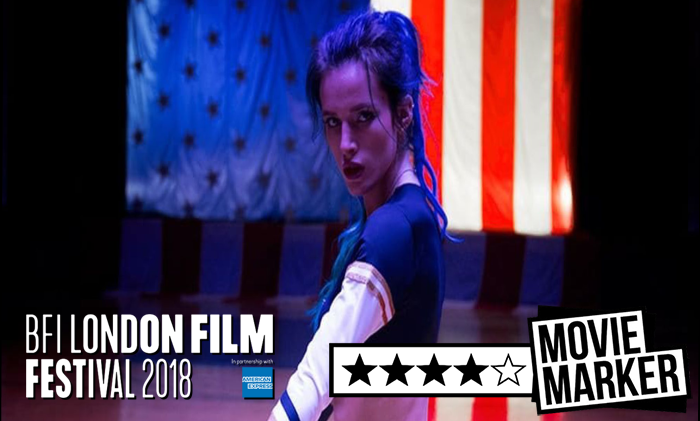 When Director, Sam Levinson started writing Assassination Nation over two years ago, he probably had no idea how shockingly relevant this dark comedy would be today. Written as his wife was about to give birth, he credits his fear of raising his child in an increasingly brutal country as the main inspiration behind this vivid satire, depicting the disastrous consequences of living online.

The city of Salem, Massachusetts is about to delve into chaos when a data hacker starts exposing highly porn-ified secrets of its population. Internet search history, digital photos and texts conversations are published. Political careers and marriages end. The hack reaches Salem’s high school whose principal is also targeted and forced to resign, despite claiming his innocence. In need of a scapegoat, the town’s authority (macho detective and police man) finds it in high school head girl, Lily (Odessa Young), whose affair with a married man,  just leaked. Lily and her friends must face the town’s growing hysteria that quickly turns into a blood bath of sexism and brutality.

The film’s core storyline revolves around Lily, who with her friends make up the popular clique of Salem’s High School. The 1990’s had their mysterious virgin nymphs (“Virgin Suicide”) and the 2000s, their bullying princesses (“Mean Girl”) but in 2018, the popular girls are fun, clever and most of all, nasty. Born in a comfortable middle class family, Lily has good grades and a cheeky talent for drawing. What Lily and her friend lack is a reliable grown up figure to look up to. Surrounded by threatening boyfriends and denigrating parents, the only grown-up who pays her some attention is her principal but even he cannot completely give in when she makes a clever accusation of the sexism of internet and social media while defending her pornographic art work. 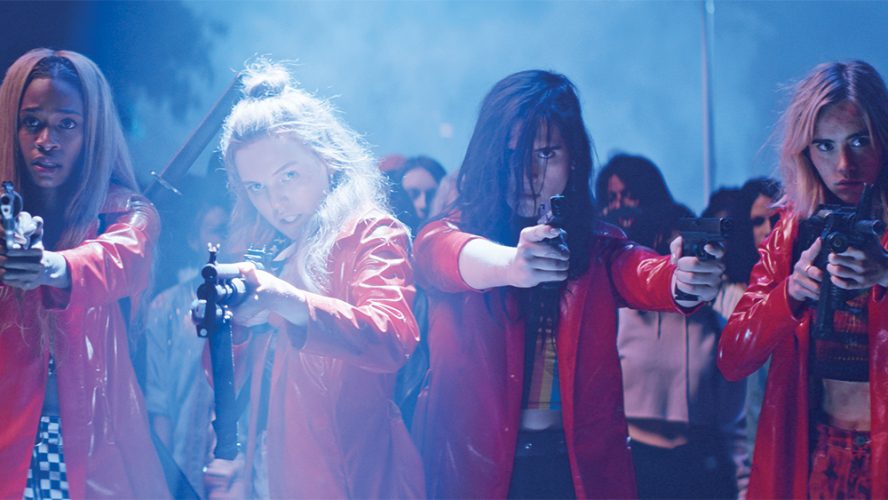 There is thin line between victim and executioner in Assassination Nation and Levinson strategically jumps from teasing to threats as if one didn’t exist without the other. Levinson seems less interested in exposing the already well established outcomes of the digital age than exploring the hypocrisy and shaming young people, and particularly young woman, face on a daily basis.

Half way between  Little Red Riding Hood and Nikita, and far from victims, these girls fight back with whatever they are threaten with, usually guns but at times razors and even a shovel. Full of extreme close-ups, the camera is intrusive, and if this closeness can be difficult at first, it quickly helps creates a real connection with those girls.  Surrounded by obvious and familiar characters (naïve head cheerleader, immature boyfriend, cheating husband…), and lifted by invigorating performances by Hari Nef (Bex) and Odessa Young (Lily), these girls can only shine in authenticity and it is hard not to root for them.

Salem’s utter obliviousness takes final form in the slushy sipping little brother, revealed as the hacker. Youngest and quiet, he seemed like a harmless addition to the dinner table and yet could bring a nation to its knee. The warning signs were there, adults chose to ignore them. The film ends with a public letter to a certain president of a certain powerful nation and a feminist call to action against any form of violence and misogyny.

The film will most likely not affect every generation in the same way and will probably swing between anti-sexist fantasy revenge to painfully relevant. Yet there is nothing in this film that can’t be traced back to a recent newspaper headline or twitter feed, regrouped to create a bloody picture of the modern America, kids are made to grow up in.

“Don’t take your anger out on me, I just got here.”