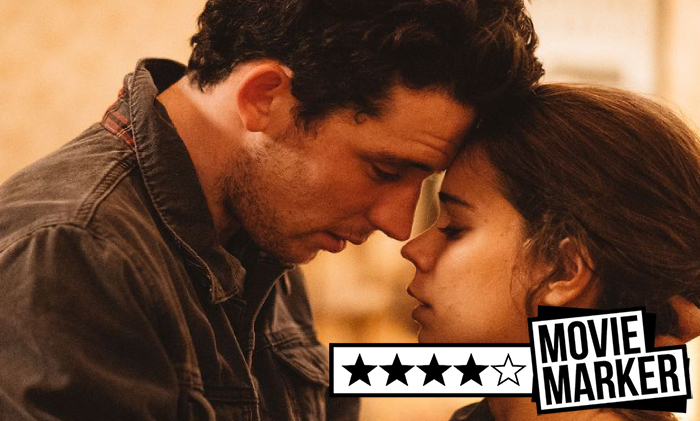 New Year’s Eve. Less a time associated with us being sweet in our spontaneity. More an occasion that sees us dial up the grandeur and be consumed by an almost desperate urge to celebrate. Yet it is deemed the ideal starting point for this fiercely intelligent directorial debut from Harry Wootliff, examining the societal pressures of being in an age-gap relationship and the social constructs of what any contemporary romance should consist of.

Applying a glossy sheen to Glasgow in the process, a late-night taxi dispute between artistic Spaniard Elena (Laia Costa) and part-time DJ Jake (Josh O’Connor) quickly evolves into a disarming love story that is littered with naivety and stifling intimacy, punctuated by an impressive soundtrack that compliments the pair’s contrasting backgrounds.

There’s a real immediacy that is apparent throughout the early infancy, leaping into the idea of living together and possibly starting a family, the latter ultimately being this narrative’s potent emotional crux. Elena’s insecurities of the past manifesting as she feels less of a woman in her bid to conceive, at odds with Jake’s rose-tinted view that their love is flawless, passed down from his own parents and how he’s long perceived their relationship.

It may begin as a running joke worthy of a few laughs in the bedroom, but the film’s handling of age disparity is wonderfully astute, driven predominantly through the perspective of Elena. She continuously questions twenty-something Jake’s attraction to her 35-year-old self, suspecting long-term he’ll trade her in for a younger woman whilst her dear female friends declare they are getting married or are pregnant, the fear of time being against her amplifying with each passing moment.

The delicacy in its depiction of the prolonged process of IVF treatment is also deeply affecting, unafraid to delve into the painstaking detail and emotional toil that comes with such an uncertain route. Much of this is down to Wootliff’s purposeful and naturalistic direction, keeping it tight in its tenderness and slowly widening the frame as these characters draw apart, subtly capturing the nuance and conflict.

Such emotional engagement is propelled by the gorgeous chemistry between its two leads, as they create an authentic romance that is bracing in its honesty. Intensely committed to Elena and the idea of building this family unit that is perhaps uncommon considering his character’s age. Josh O’Connor is on fantastic form as Jake, displaying a captivating maturity whilst Laia Costa is superb as Elena, radiating the pain of her predicament in heartbreaking fashion.

It could certainly be more refined in its run time, with the latter stages somewhat overwrought in reaching a desired conclusion. But Harry Wootliff’s ‘Only You’ is beautifully crafted cinema that is sharp in its insight and consistent in its charms, offering two illuminating performances.