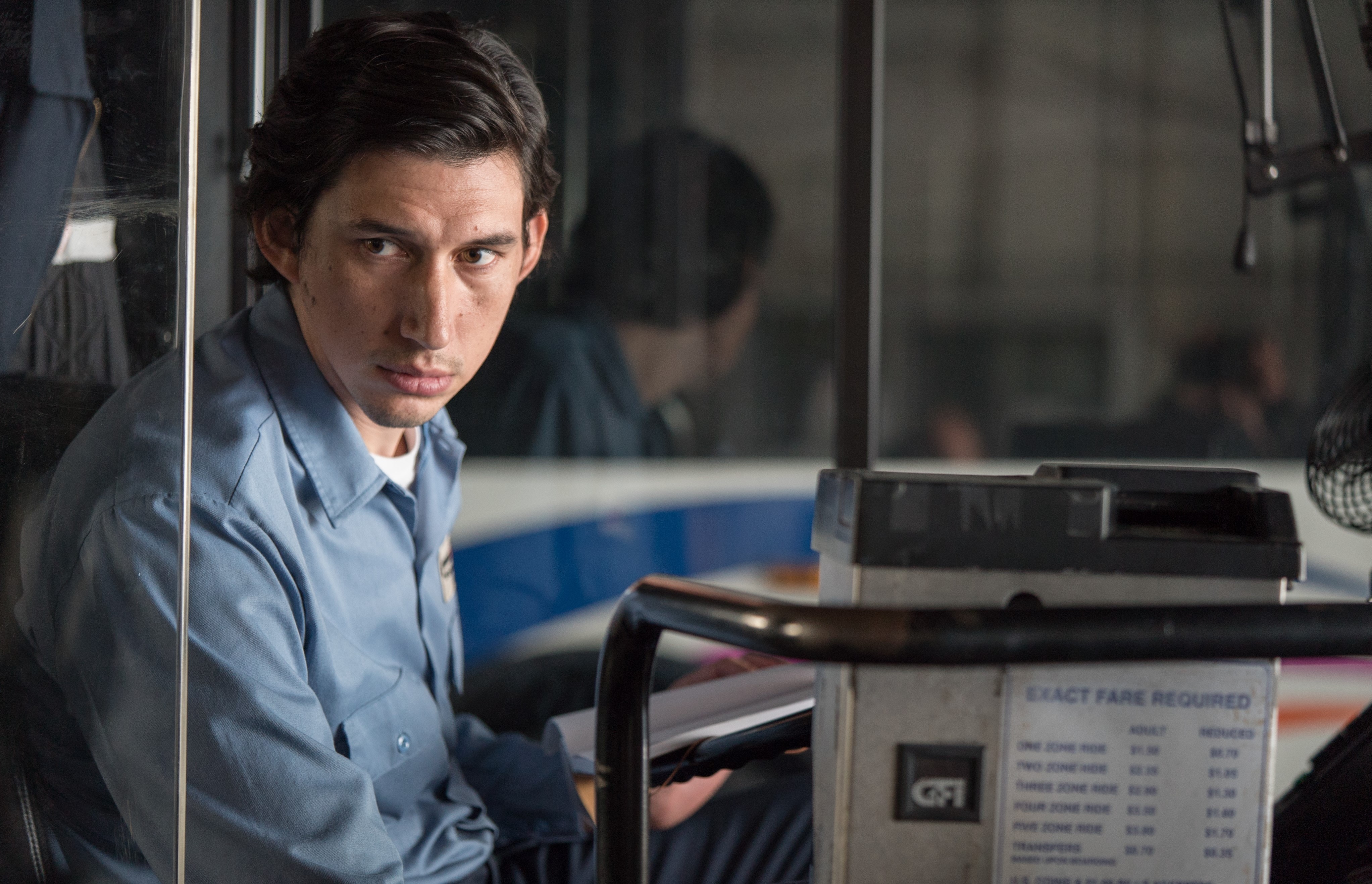 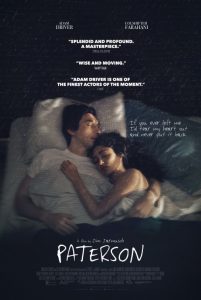 The camera looks down on a couple in bed.  She’s asleep, he’s slowly stirring, checks his watch and, as it’s just gone 6 am, he gets up.  It’s Monday and the start of another week in the life of Paterson the man, Paterson New Jersey and the opening of Jim Jarmusch’s poetic look at the everyday, ‘Paterson’.

Paterson (Adam Driver) the man – we don’t know if it’s his surname or first name – is a bus driver in Paterson New Jersey.  He writes poetry in his spare time, lives with his adoring wife, Laura (Golshifteh Farahani), who dreams of making her fortune with a cup cake business.  Or becoming a country singer.  The other occupant of their home is her dog, the jealous Marvin (Nellie).  As we witness a week in his life, we follow his daily routine, watch him at work, meet his friends, acquaintances and strangers, listen to his poetry and learn more about him.  Far more than he would ever want to reveal.

It’s a film with a fascination for the rhythms of everyday life.  We’re soon drawn into them – Paterson’s daily chat with supervisor Donny (Rizwan Manji) before he sets out on his route, eavesdropping on his passengers, writing poetry in his secret book during breaks, his evening walk with Marvin that always ends up in the same bar where he meets the same people, his wife’s distinctive taste in black and wife décor and even more unusual cookery.  It’s the same every day, and yet it’s never the same, because there’s always something happening, even if it’s in the same low key as the entire film.

And, once we’re comfortable and familiar with that rhythmic routine, Jarmusch throws in something from left field to upturn it.  Paterson’s bus breaks down because of an electrical fault.  Everett (William Jackson Harper) is so distraught at being dumped by girlfriend Marie (Chasten Harmon) that he threatens to shoot himself.  And the unassuming Paterson deals with both situations with a quiet authority, hardly turning a hair.  We’re also given the story behind one of his other routines.  On his return from work every evening, he collects the post from their mailbox.  It’s on a pole and it’s always lopsided.  He straightens it, it’s still straight in the morning but when he gets home again it’s wonky.  Why?  Because Marvin always gets out of the house to give it a firm head butt.  It’s our little secret.

You wouldn’t think twice about the way Paterson deals with situations if it wasn’t for one thing, something that tells you there’s much more going on underneath the surface.  The photograph of him in the bedroom in his Marines uniform, with a chest full of medals.  It looks remarkably like a shot of Adam Driver himself taken during his time in the Marines.  What Paterson might have seen or experienced in the past we never know, but now he embraces what appears to be the mundane, and even escapes from that by writing poetry.  It isn’t very good, nor is his wife’s cooking – sprout and cheddar cheese pie, anybody? – or her monochrome colour schemes, but it doesn’t matter.  They both have their dreams, they may not achieve them but they still go on trying.

There’s no dramatic tension and little in the way of conflict (except Marvin’s glowering resentment) and yet it’s a film that holds you in the palm of its hand with its minute observations, beautifully understated humour that will give you the giggles and performances to simply love.  After a clutch of impressive supporting roles, Adam Driver steps into the full glare of the spotlight, is never off the screen and is nothing short of perfection as the would-be poet, a creature of habit with a deeply buried history.  As his child-like wife, Golshifteh Farahani flits from one fad to another – cup cakes, learning the guitar.  She genuinely worships him, but seems completely unaware that her husband has hidden depths.  And bulldog Nellie, aka the malevolent Marvin, waddled off with the Palm Dog at Cannes.

‘Paterson’ is beautifully observed, deceptively simple in its structure and full of so much loving detail it would fill more than one of Paterson the man’s secret books.  It’s contemplative, quiet, poetic and a little nugget of pure gold. At this year’s Cannes, Jarmusch said he saw the film as an antidote to the modern action movie.  If they’re all as good as this, he can make as many more as he wants.