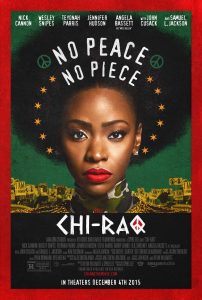 Spike Lee’s Chi-Raq is a shot of pure energy. A ballistic, hyper-aggressive and high-concept presentation of gang violence and oppression, feverishly played with soul and swagger. In any other hands it would likely feel cloying and preachy, but the veteran auteur maintains a fierce grip; enabling his latest to share equal bark and bite.

A modernised retelling of ancient Greek play Lysistrata by Aristophanes, Chi-Raq swaps togas for urban camo, and trades in the Parthenon for Southside Chicago; a land commanded by black-on-black violence, poverty and macho misogyny. In a bid to collapse the senseless cycle of crime and misery, confident and lusty Lysistrata (Teyonah Parris – the breakout star of Dear White People) hatches a cunning plan. The girlfriend of hip-hop heavyweight and gang leader ‘Chi-Raq’ (Nick Cannon), Lysistrata convinces her fellow females to abstain from any sexual activity with their men until they can learn to behave: no peace, no piece.

Legendary performer Samuel L. Jackson serves as a postmodern Greek chorus named Dolmedes – complete with blaxploitation-worthy pimp suits – here, and early on turns to the audience, explaining that to honour Aristophanes, the story will be delivered in rhyme. It is a thunderously unique manner in which to convey narrative. Characters speak largely in loose, janky poetry, with rhythms that vary between Shakespearian couplets, freestyle-rap battle verse, and slam-poetry riffing. 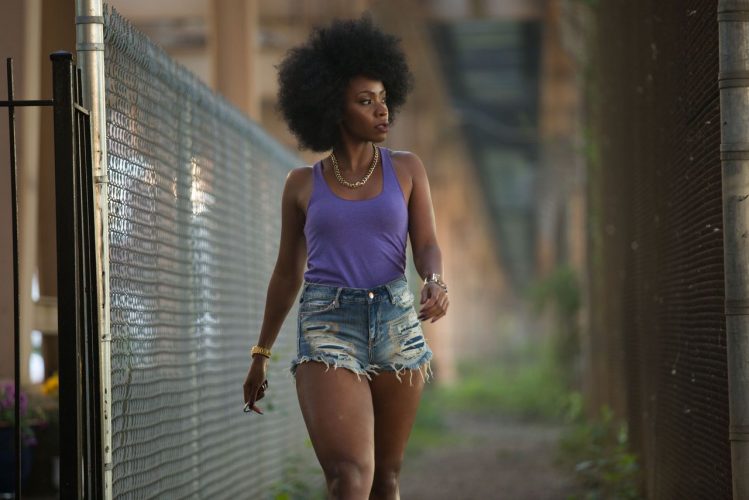 Lee’s film arrives at the BFI London Film Festival with remarkable urgency. It is a frenentic prayer, a call to arms; gun violence and inner-city crime is a disease that continues to plague, and a vaccine must be devised. Expertly blending genre and thematic tone, Chi-Raq is able to be both vital and arresting contextually, yet explosively entertaining and enveloping cinematically. Despite the harsh realness, this is a brazenly funny, seductively slick motion picture; one ravishingly textured and populated by memorable characters.

Parris in particular spellbinds. She struts through scenes with infinite power and prowess, ensuring your attention is fixated on her every movement and motion. She evokes sexuality and stamina, and her interplay with the cavalcade of high-calibre co-stars – John Cusack, Jennifer Hudson, Dave Chappelle, Wesley Snipes – to name but a few, is most impressive. Cannon is equally excellent, and thrives in the film’s titanic musical sequences. His spits bars with venom and humanity, as if he really is feeling the verses he’s reciting, and the effect is strikingly potent.

Perhaps Chi-Raq‘s finest brushstroke however is the representation of this weathered land. Despite Chicago being alive with warfare and chaos, Lee ensures it looks more like an idealistic battleground as opposed to a tourist’s nightmare. There is much blood on these streets, but equally hope and opportunity, too.

After a number of incidental works, it is a sheer pleasure to have Lee back in rhythm again, and his latest moves to an unmistakably original beat.