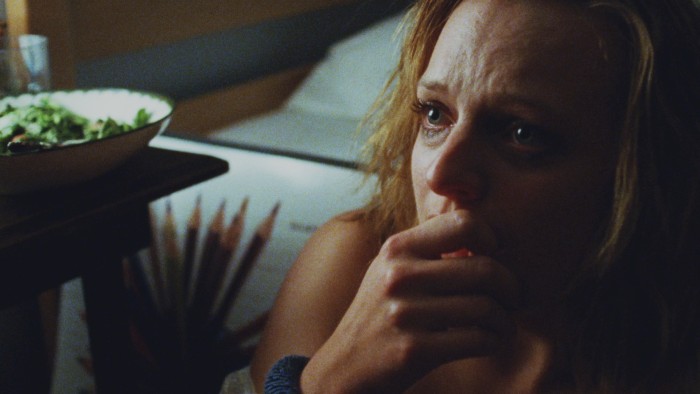 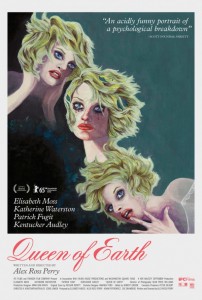 Perhaps inadvertently so, Alex Ross Perry has crafted the most unsettling horror movie of the year. His responsive effort to 2014’s excellent Listen Up Philip reunites the indie auteur with lead actress Elisabeth Moss, and together the twosome deliver something wholly unique and entirely unforgettable.

Queen of Earth opens with a truly tone-defining scene: a brutal close-up of Catherine (Moss) in a state of harrowing emotional torment. Her hair matted and sodden, her make-up-stained eyes like endless pits, her nose and cheeks a burning shade of crimson. It is perhaps the most inescapably direct introduction to a motion picture all year.

Her heartache comes from the abandonment of now-ex-boyfriend James (Kentucker Audley) – someone with whom she was far too dependant on; both emotionally and spiritually. Maintaining tradition, she heads to best friend Virginia’s (Waterson) remote and tranquil lake house for her annual vacation, but her visit this time is heavily steeped in sadness and remorse.

Across the week, her privacy is ‘invaded’ by local neighbour Rich (Fugit) who is striking up a relationship with the homeowner. It becomes quickly and awkwardly apparent that their personalities clash, and soon Catherine begins to resent the twosome for penalising her period of grief.

If this all sounds unfathomably depressing, well that’s because it is, but only speaking contextually. With Queen of Earth, Ross Perry confirms himself as one of the brightest bulbs in the American tanning bed; his lyrical, uncompromising vision is both knife-twisting in its bitterness and intelligence – a character study developed with equal parts acidity and excellence. Had the film gained UK distribution in 2015, this would likely feature atop of many ‘Best Of’ lists, and rightly so.

Beautifully precise editing unveils darker, denser shades to the friend’s chemistry. It comes to fruition that the year prior, Virginia was made to feel like the third-wheel when Catherine randomly brings James along on holiday; tainting their girl-time together and putting barriers on their connectivity. Fast forward twelve months and the roles have reversed, but whilst Virginia’s cocksure wit can cover her inner bruising, Catherine is struggling to gather the fragments of her life at the very best of times, let alone being confronted with Rich and his stern cynicism.

There are two scenes in particular that are a cut above the competition tenfold, and both are entirely static. Ross Perry’s deeply invasive camera hangs still like a cruel voyeur as his actors occupy the frame. The first features Moss and Waterson slumped in a hallway, reflecting in turn – and in detail – about past tribulations with their men. His ferociously charged screenplay fizzes and burns as it rolls off the tongue; it’s a wicked broth that begs for a further spoonful.

The second, is well, completely towering, and comes as the film draws to a close. One will not spoil but Catherine’s definition and diagnosis for depression is both painstakingly accurate and unrelenting brilliant. The monologue has the power to both draw a tear of sorrow and a sour cackle of glee – that is quite frankly brilliant filmmaking.

Moss is one of the finest actresses working right now and has that rare ability to convey fragility and power simultaneously. Being the great writer-director that he is, Ross Perry knows how to perfectly exploit this fact. After her exceptional work in The One I Love and of course Mad Men, it would be hard to think she could further, but alas.

Catherine is without doubt her greatest character performance to date. It’s so good that in a just world (of which this is not; just watch the film to further that point…), she’d be a big winner during awards season. Moss is both shattering and terrifying  -the kind of person you really want to support, but are too scared to approach. Her delirious and delicious descent into madness borders on insufferable, and that’s perhaps the greatest praise one could offer.

Waterson and Fugit are equally excellent too; they serve as the perfect counterbalance to the psychologically untethered Catherine, which in turns, makes them more unpredictable. As Ross Perry refuses to coherently see the film through particular eyes, we must decipher what it ‘real’ and what is a bleak projection of a tarnished mind. We anchor ourselves to Virginia for the most part; whilst she’s rough around the edges and certainly damaged, she is approachable, yet her perceptions of Catherine’s madness are heavily bias – namely due to her vocal opinions of James and the couple’s bizarre behaviour.

Queen of Earth’s deepest authenticity lies in its conclusion. Like the honest, emotional turmoil of heartbreak, it offers no quick-fix or easy resolution, rather drip-feeds the psyche with progressive malice. It is a challenging watch, an exceptionally disarming one in fact, but it is also one of the most vividly perfect films all year.