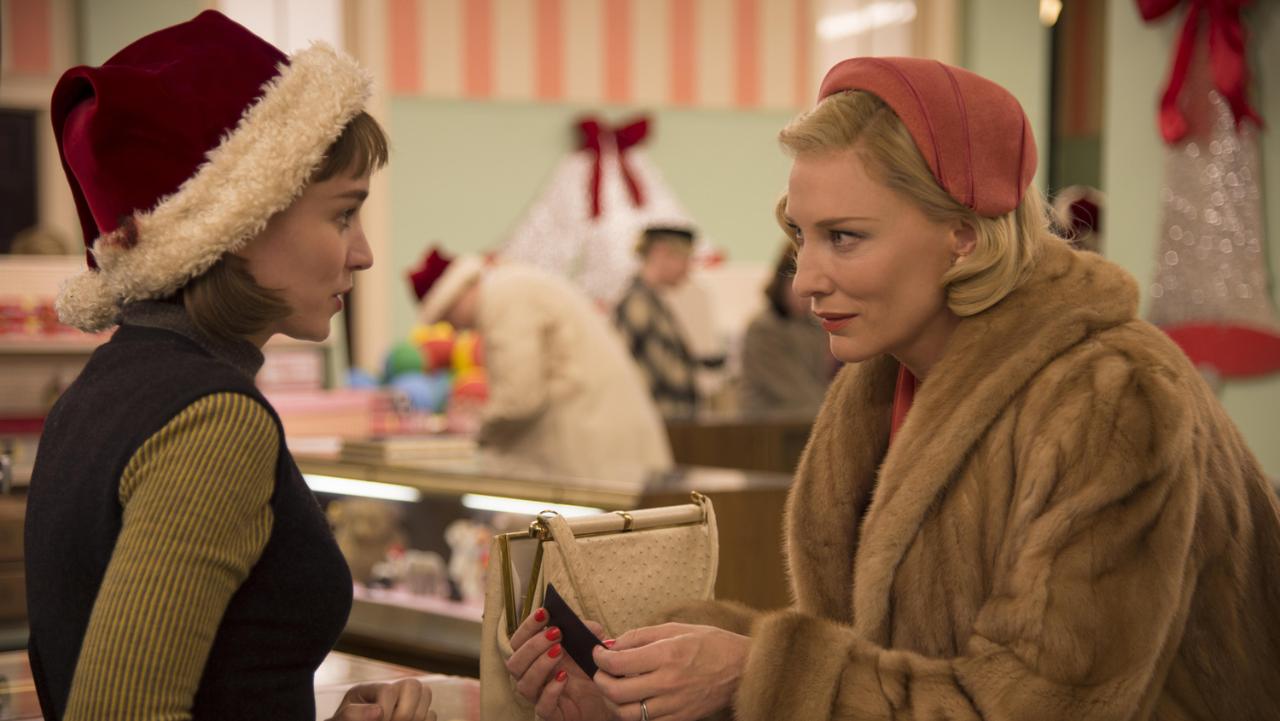 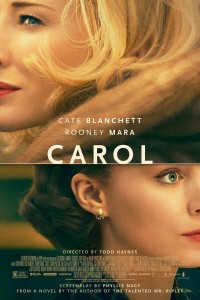 The immeasurable magnitude of Todd Haynes’ latest is quite frankly remarkable. It is that rare film that feels timely and classic in equal measure; a Sirkian symphony that sweeps and swells. So exponentially wondrous is Carol that despite viewing a handful of fine films after, it remained firmly at the forefront of one’s deepest thoughts. Even now as this is typed, the progressive trance remains.

An intrinsic companion piece to the joyous Far From Heaven, Cate Blanchett stars as the eponymous figure; the ravishing, wealthy dame soon to be divorced from Kyle Chandler’s possessive Harge. Following a chance encounter at a department store, she strikes up a bond with Therese (Rooney Mara): a young, virginal shopgirl. Connectivity surges both emotionally and spiritually as the twosome grow closer – much to Harge’s disgruntlement – and soon the relationship begins to affect the progression of custody rights for Carol’s daughter.

This woozy, swirling character drama is a richly observed piece of work: a lyrical, sensuous study of tangible romance and postmodern Americana. A number have been unjustly pigeonholing Carol as a ‘lesbian’ film; of which is most certainly is not. Haynes’ heady, enchanting adaptation of Patricia Highsmith’s 1952 novel The Price of Salt, is a poetic vision of human interaction. Glances, gazes, brushings of hands and hair. It is about how we digest and amount to love as much as being in love. That intoxicating, enrapturing gravity translates far wider than merely same-sex relations.

Haynes’ period is intrinsically detailed – founded upon the utmost intelligence and artistry. The cigarettes, the train carriages, the lipstick, the photographs, the cars and the costumes: all entirely steeped in realism. Much like the equally sublime (and shared location) romance Brooklyn, the experience of watching Carol is not only startlingly overwhelming, but utterly transporting. So vivid and realised is 1950s NYC that the warm steam which litters the midnight streets reddens the cheeks.

This creamily symphonic film is furthered by the enthralling visual pallet. Perhaps it borders on cliche to say that “not a single frame is wasted”, but not a single frame is wasted. Filtered and funnelled through ambient, glowing tones, the screen is consumed by images of deep sincerity and unfathomable beauty. The festive setting entirely supports this; light bouncing from baubles, chilly snowflakes dancing melodically in the breeze. Across 118 minutes, irrevocably bliss washes over the spectator, delicately lapping with every flush.

Whilst this is most certainly is a towering exercise in style, it is significantly broader in substance; so much so that a second visit is justly warranted. The subtleties of Carol and Therese’s relationship are desperately complex: layers finitely unfolding as we peel further at the fringes of their facades. Correlative narrative strands are densely imprinted as we journey across country with the twosome whilst reflecting on the repercussions of Harge’s appeal for child rights. He is a firmly forceable breadwinner, but equally a man whose world is crumbling. He already resents Carol’s closeness to a former lover Abby (Sarah Paulson) – and of course boorishly hates himself for not having punished his errant wife more emphatically for this liaison. The engagements with Mara’s quaint store clerk are reflective of a marriage collapsing which is a reminder too cruel and callous for him.

These character developments are just some of the assets in this outstandingly intelligent film: quietly thunderous, gently groundbreaking. Screenwriter Phyliss Nagy has been endeavouring to translate Highsmith’s seminal novel – one which fell out of print for subsequent decades, before achieving its justified reputation as feminist classic – for in excess of 19 years. Her pairing with Haynes, perhaps the most assured auteur for caressing and moulding enlightened screen females, is something of a miracle.

The pair bounce off each other creatively as effectively and respectfully as Blanchett and Mara: an incredible double-act who show much love and loyalty to each other, and to the project simultaneously. Somehow Blanchett has managed to better her already inescapably excellent performances of past. Her shattering, fractured rendition in Blue Jasmine bares fewer scars than her Carol; a desperately sad, lonely and misdirected woman – confined to a lifestyle, a rhythm that seems impossible to adjust. Her drum beats at a different pace to Harge’s and the environments she called ‘home’, but is forced to bury such expressions. This is enthralling, magnetising work from a performer at the peak of her powers. Academy Award nominations rightfully beckon.

With this in mind however, the sincere hope is that Blanchett is backed for her role in Truth whilst Mara is pursued for Best Leading Actress in Carol, because she is the lead, and utterly faultless across every single cell. This is unquestionably her greatest achievement in a career laden with highs. The fragility and nuance of her Therese is something so unmistakably profound that it demands to be experienced, not watched. Almost blank; alien is she. The intricacy of her sociological, political and ethical layerings are rendered with the utmost thoughtfulness: so tender, so divine. It is simply disarming just how exceptional Mara is here.

Haynes has founded cinema at its most defiant. This is of hallmark quality; a transfixing, enchanting fever-dream that ranks among the great modern American dramas. It is one of the year’s most pivotal motion pictures.