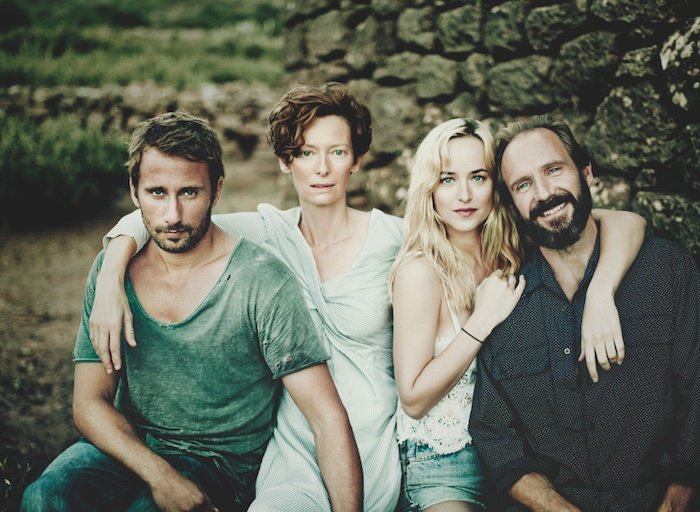 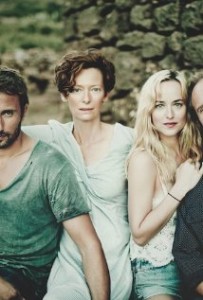 Our modernised visions of love perfectly reflect the complications of what it actually means to feel the emotion. It is messy, convoluted, and has the progressive power to make or break a person simultaneously.

All of these themes find their way into Luca Guadagnino’s latest picture A Bigger Splash, and they are dissected under both warm and blinding lights; each to inch-perfect precision.

Marianne (Tilda Swinton) is a globally celebrated rockstar; a hyper-blend of David Bowie and Mick Jagger if you will. She is currently recovering from major throat surgery and is unable to talk. Alongside her trusting man and documentarian Paul (Matthias Schoenaerts), the couple take solace in their beautiful paradise in the Sicilian Islands, but their vacation is disrupted by an unexpected visit from Harry (Ralph Fiennes); her former lover, and his sultry young daughter Penelope (Dakota Johnson).

Gloriously rendering a marriage between person and place, Guadagnino (I Am Love) purposefully creates an ethereal shadow with his environments. The hazy sun which hangs in-frame, the vast mountainous treks laden with plush foliage; it all counterbalances the narrative’s sly progressive tones. A Bigger Splash adopts the idea of “what goes on tour, stays on tour” without really forcing as such upon the spectator. It uses wit and whimsy to join the dots. From the get-go, audiences will become aware that they are in for a heady, seductive trip that will likely end in fireworks.

Furthering the location’s importance is the levels of solitude it offers our quadrant of performers. With plenty of places to relish fantasies undetected, it provides an equally mysterious and unpredictable port of exploration. Screenwriter David Kajganich beautifully shifts genre conventions and draws singular strands from a majority, consequently weaving his own yarn that blends and blurs what we have perhaps come to expect.

This is bitingly funny filmmaking; the dialogue is delivered on a high-wire and is utterly enthused with vigorous energy. So natural is the delivery and so authentic is the text that large portions feel like estranged friends awkwardly – and honestly – catching up over a much-delayed meal.

But covered by all the laughs and smarts lies much darker shades. The facade is delicately peeled away throughout the 120min duration and begins to reveal layers of deceit, debauchery and criminality. It whips and fizzes one minute; sumptuously hanging in the morning sun, and then instantaneously shifts the momentum to project a cavalcade of life’s inner ugliness.

These elegant and seamless transitions keep the spectator firmly on their toes. Constructing dense atmosphere with tightly angled frames and ambient-coloured sequences, Guadagnino controls his film like a fearless puppeteer; ensuring not a single cell is wasted or feels remotely paint-by-numbers.

Collectively the cast are exceptional – each offering a different tier to the towering cake that is bound to topple at some point. In an almost entirely muted role, Swinton provides her best work in years. She morphs with sincere subtleties and strikes the desired balance between joy and self-loathing. The same can be said for Schoenaerts who thrives in the English language. There are deep cuts in his world that are slowly filling, but are quick to feel fragmented.

Johnson provides her best performance to date no questions asked. This is a sizzling, often twitching performance that could have easily revealed many imperfections in her pallet, but rather constructs her erotically and poetically. Undoubtedly the star here however is Fiennes in likely his funniest, sharpest role to date – it could be even brighter than The Grand Budapest Hotel.

He is hilarious and endearing, provocative and repellent; a confused but emotionally sublime hybrid of the very best and worst of the modern man – karaoke-singing, penis-swinging and all. It is one of the very best character performances across the entire year.