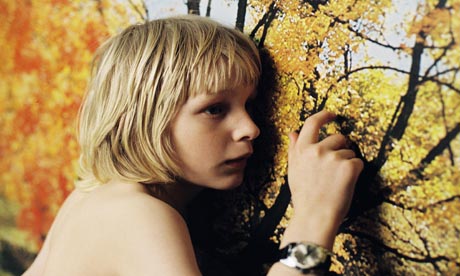 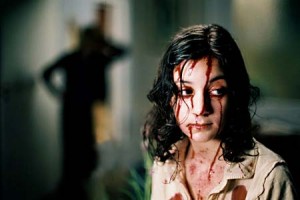 If you have seen the acclaimed Swedish-made vampire movie, ‘Let the Right One In’ and its American remake ‘Let Me In’, you have probably already chosen your own preference. Tomas Alfredson’s original ‘Let the Right One In’ (2008) – a story about a delicate and bullied teenage boy and his relationship with a mysterious, vampiric girl, was a satisfying synthesis of atmospherics and violent incidents, of tenderness and terror. That film’s haunted ambience seemed to have sprung organically from the frozen nation in which it was set. ‘Let the Right One In’ drew you in slowly – into the chilled static mist and numbing frosts – reflecting the cold-heartedness of the world that the characters inhabit. In the American remake, the setting, originally 1980s suburban Stockholm, is shifted to Los Alamos in the same era, with Ronald Reagan’s religion-tinged speeches resounding on the characters televisions. ‘Let Me In’ (2010) is pretty faithful to the first movie, but omits the disreputable queasiness of the local community that provided some of the Swedish movie’s satire and reworks a pertinent moment in the original film (in which the boy ferociously lashes out at his tormentors while skating on a frozen pond) which was deemed unpalatable for American audiences, for some reason. Even so, it almost seems unnecessary for a remake to have been made, except for those who simply cannot tolerate the idea of performing the dual brain functions of reading subtitles while watching a foreign movie.

The principal child actors, Chloë Moretz (required to turn in a more complex performance than her scene-stealing Hit Girl in the movie ‘Kick Ass’) and Kodi Smit-McPhee, from the post-apocalyptic movie ‘The Road’, acquit themselves well, but with their healthy, well-fed, all-American demeanor, they can’t quite replicate the sense of vulnerable isolation and gender-bending confusion inherent in the performances of Kåre Hedebrant and Lina Leandersson in the original. ‘Cloverfield’ director Matt Reeves takes on the directorial duties of the remake, and apart from emphasising the vampire violence with some CG enhanced jolts of brutal throat-ripping (which work well) cleverly adopts the original movie’s use of long, suspenseful shots and subtle sound to construct the tense, wintry mood. Reeves has the opportunity to employ the odd exhilarating directorial flourish, such as a devastating car crash captured from the perspective of the back-seat. As remakes go, it is one of the better ones, an efficient retelling of the Swedish original, aided by considered performances and also perhaps because it learns valuable lessons from the success of the original and chooses not to stray too far from its source material.

Also in its favour, ‘Let Me In’ transfers from the original, the element that always made this particular vampire story more than just a scare-fest fantasy – the most pertinent aspect of both movies, for me at least, is the fact that here, the fear of the vampire monster is always on the verge of being upstaged by the real-world fear of the bully. The vampire is not the principal villain or the object of our greatest revulsion – the bullies remain the most repulsive monsters present in both movies.

Vampires remain our most adaptable fictional horror creations, rediscovered and reinvented by each generation to reflect their own fears and repressed desires. Contemporary concerns and attitudes always serve to colour our current perception of these malleable bloodsuckers and their slayers. Whichever movie version of this particular vampire tale you prefer, its real horror lies in its ability to remind us all of our greater fear of the real monsters that are always out there. 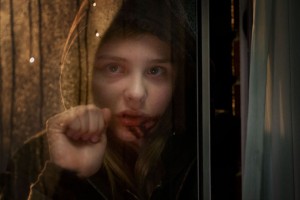