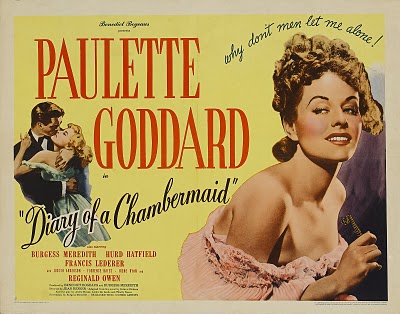 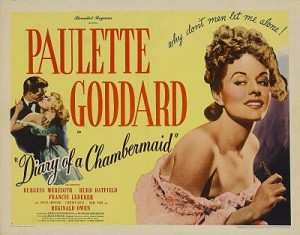 Having Jeanne Moreau in a starring role is like having a golf handicap big enough to render any movie automatically watchable. Her default pout and her luminous smile, her eyes and her voice could get under any man’s skin; the strength and shrewdness of her mind leave women of all ages admirative. Faced with Moreau’s charms, all of mankind is powerless.

Le Journal d’une femme de chambre, as it should, makes extensive use of these charms. As Célestine, a sophisticated chambermaid leaving Paris for the countryside to work for an idiosyncratic bourgeois family, she quickly learns how to use her subtle sensuality to govern through 1930’s politics – sexual, domestic, nation-state – and through the array of odd characters she must respond to. The cold, superior, frigid Madame Monteil; her aggressive, sexually frustrated husband; her elderly father with eccentric fetishes; their mysterious groundskeeper of fifteen years, Joseph. Célestine, always the wisest, is perceptive to their quirks and uses them to outsmart her employers, earning confessions by way of seduction. Moreau is, of course, note-perfect in the driver’s seat as she single-handedly drives from points A to B a film that could easily lose its focus.

Here, legendary filmmaker Luis Buñuel is at his most straightforward, dropping all of his signature surrealism, instead recalling his contemporary Louis Malle. The film is not so much entertaining storytelling as a vehicle to observe a very tumultuous, and interesting, time of France’s history. He takes on many of his preferred topics, from class differences and the hypocrisy of the bourgeoisie to fascism and the role of religion, while somehow making room for an unsolved murder. And don’t kid yourselves – it works, and it’s surprisingly manageable. Buñuel intelligently illustrates how these forces intertwine and manifest themselves in an otherwise banal daily life (even the murder is treated as a minor subplot in the last third of the film) such that he does not impose a historical and sociological analysis, rather giving the viewer the option to passively ingest this information as a simple component of the film. That the former makes for a better experience than the latter is entirely arguable; such is the brilliance of Buñuel, here in total control of his oeuvre.

Fans of his vision and cynicism view Le Journal d’une femme de chambre as a subtle classic. It must be said, however, that his is a bleak world. His characters, though he takes pleasure in painting them various shades of grey, are all ultimately corrupt; the film itself becoming an exercise in misanthropy – clever, perverse and pessimistic. It gets slightly frustrating, especially when expecting a clear plot to emerge from the voyeuristic blur, wondering if the film has any purpose beyond attacking the Western culture. The final scene, depicting the rise of fascism in France, perhaps best illustrates the frustration: though it is, taken on its own, a powerful scene, it is utterly unnecessary in context of the picture. Buñuel wanted us to truly feel the decay and he is unquestionably good enough to pull it off. Still, it leaves me wondering if, by pushing it as far as he did, he sacrificed what could have been a genius picture just to bold the commentary underlying it.

Life In A Day