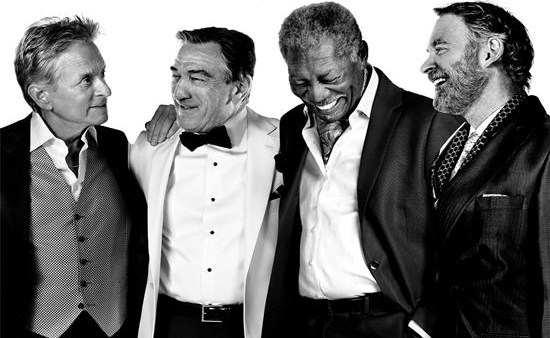 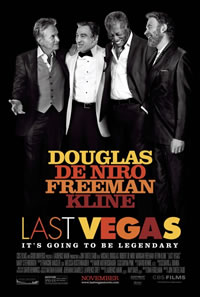 The sheer saturation of Hollywood releases in the modern era, it often astounds when one discovers there are still on-screen legends with successful long-spanning careers yet to work together. Enter the extremely likeable and illustrious quad of Michael Douglas, Morgan Freeman, Robert De Niro and Kevin Kline, whom despite their aging complexion, are ready to teach the riotous ‘Wolfpacks’ of this world a thing or two about ‘living it up’ in Sin City.

Sidestepping a brief glimpse into their mischievous youth and the forming of the self-proclaimed Flatbush Four, we fast-forward six decades later with Douglas’ Billy eager to assemble the gang once more, as he prepares to wed his attractive partner (Bre Blair) almost half his generous age. Still struggling to come to terms with personal loss, Paddy (De Niro) remains bitter and apprehensive about a reunion whilst Archie’s (Freeman) bed-ridden antics continue to leave his doting son Ezra (Michael Ealy) concerned about his welfare.

Convinced by his disillusioned wife to escape the cringeworthy exercise classes and equipped with ‘tools’ to help eradicate any ‘frustration’ from his system, Sam (Kevin Kline) leads the charge with sights set on an unlikely bachelor party weekend in Vegas. Hitting the clubs and heavy consumption of drink are swiftly ticked off the ‘to-do list’ , but it’s the various encounters with an aspiring club singer called Diana (Mary Steenburgen) that leave them charmed.

‘Last Vegas’ may capture the fun-fuelled spirit of the films it will inevitably draw comparisons with, yet isn’t as sure footed in its attempts to be a heartwarming piece on ‘growing old gracefully’ and retain the sweet narrative centre that smothers the opening stages. The seemingly noble attempts for our older contingent to instill morals into young ‘party-hards’ for example prove contradictive, with an occasional lack of subtlety in Turteltaub’s direction, particularly in portraying the opposite sex an unfortunate deterrent.

The camaraderie and witty banter between its four-piece is what ultimately drives the film through its familiar and predictable route. Kevin Kline’s Sam garners many of the chuckles with an entertaining turn along with Morgan Freeman cutting loose in refreshing fashion as quick for a quip Archie. Tacked on as their subplot may be, Michael Douglas and Robert De Niro fight the deficiencies of a clichéd script with gusto in their respective roles with Mary Steenbrugen’s underused Diana lighting up the screen in every sequence she graces.

Occasionally as creaky as its cast but full of charm, ‘Last Vegas’ never comes close to fulfilling its ‘going to be legendary’ poster tagline once the initial thrill of seeing its stars assembled subsides. An often mildly amusing, if throwaway cinematic experience.