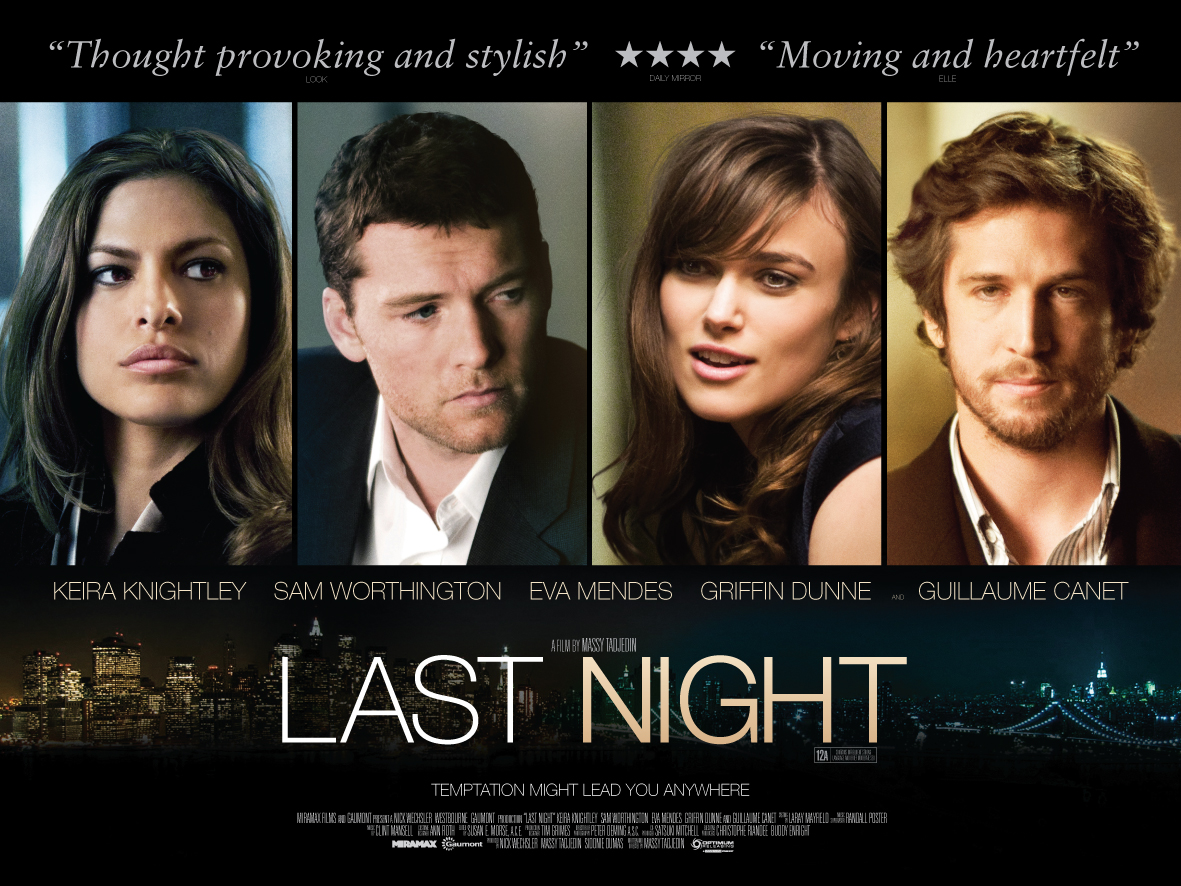 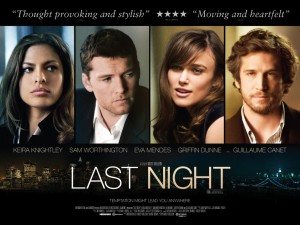 There are movies that I think are empirically good and everyone should like them. There are other movies that I think are so bad that everyone should hate them, and I am maddened by every box office dollar they manage to bring in. And then there are movies like Last Night, a film which should be enjoyed by certain types of people, but hated by others. I happen to fall into the former category, but if you hated this movie, there isn’t anything wrong with you.

The story takes place over a period of about 36 hours, and follows the travails of four attractive young people in New York City.  The focal characters are the 3 years married Keira Knightley and Sam Worthington (who is incredibly handsome by the way), and their respective tempters, played by Guillaume Canet and Eva Mendes. The movie is mostly slow paced and almost entirely dialogue driven, and so the entire thing really hinges upon the actors.  All four stars deliver admirable performances, which completely made the movie. Griffin Dunne also gives a very strong performance in a small, but crucial supporting role. The film was further augmented by the score from Clint Mansell, which beautifully sets the tone throughout.

There isn’t a lot to say about the plot, except that it presents a fairly captivating portrait of marriage and adultery from a very personalized perspective. The man is physically tempted by the advances of a sexy coworker, and the woman is emotionally tempted by the poignant connection with an old love. Again, all that is good about this movie must be seen to be appreciated. I personally was enchanted by the music and the excellent cinematography, and I bought everything the actors were selling. I especially enjoyed seeing the action star Worthington flex his dramatic muscles.

If you liked Closer, you will almost definitely like this movie. If you hated it, you will probably hate this too. It will be a little slow for some, and many will find the conclusion (or lack thereof) frustrating. But for those of you who like something a little different from your romantic drama, with a lot of questions asked without many answers, Last Night is definitely worth a look. And if you hate it, that’s alright too.