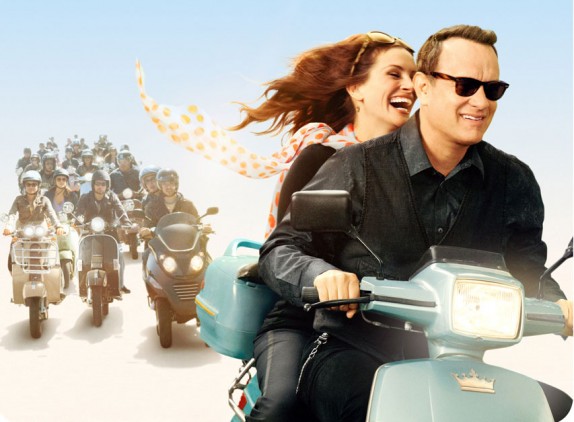 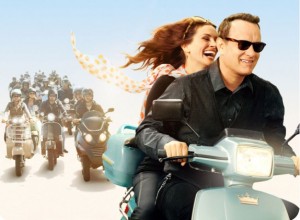 Every genre has it’s highs and it’s lows. At this particular era of cinema, the “romantic comedy” is definitely at a low. Low is an understatement as the genre shares the same low batting average as most horror films that are just as formulaic.

So every once in a while you gotta bring out the big guns to show the big hearted movie goers how it’s done. No, not Kate Hudson and Matthew McCounaghy- I said big guns darnitt! That right, I’m talking “everyman” Tom Hanks and “mile-wide smile” Julia Roberts.

Do I have your attention now? A Hanks/Robert joint collaboration had mine, and high hopes were had with Hanks returning to the directors chair for only the second time after his enjoyable debut, “That Thing You Do”. So I tell you good hearted people who also like to have their heart flutter at the movies, after watching “Larry Crowne” I can tell you I was assuredly…

The main flaw is a dull script from Hanks and Nia Vardalos (My Big Fat Greek Wedding) that skimps on the details and, more importantly, skimps on the laughs. A 50-something Larry Crowne enjoys his job at U-Mart (much like Targer or Wall-Mart). As an eight time employee of the month with no college education (and therefore opportunity for advancement) he’s canned. Divorced just a few years back with a mortgage that can’t be payed, Larry finds himself in the same crossroads hole a lot of Americans happen to be in today. After a job search goes awry, Larry done decides to get his edumacation on and signs up for community college.

It’s never to late to start over. You’ve got something there, something people in these times can relate to and something inspirational. If you want Larry to fall for hot teacher in the process then cool beans, but don’t lose sight of what you started with. 217 Speech hot teacher, Mercedes Tainot (Julia Roberts), is also a hot mess. Mrs. Tainot is burnt out on teaching, burnt out with her marriage to porn-loving-failed-novelist husband (Bryan Cranston), and burnt out on solving her problems without alcohol.

Those flawed details and more: Why is Larry enrolled in a speech class? We never really know the direction Larry wants his education to take him, so how is his speech class going to further him? Why does Larry join a little scooter gang with a bunch of 20-year old hipsters? (I know it’s not for laughs as a painful West Side Story snapping initiation proves). Why is Mrs. Tainot’s husband portrayed as being the only one to blame for the marriage’s demise? Why does that requires a “you-go-girl-rebuilding-your-life montage-with-girlfriend-played-by Pam Grier“ that totally dismisses a debilitating alcoholism just because she has a crush?

I can’t deny Mr. Hanks is charming, he’s a national treasure and we all know it but his finished product is nowhere near as charming as him. Also, it can’t be a good thing when Wilmer Valderrama gets the best laughs of the film in a small role. In the end, “Larry Crowne” was as tame as Mrs. Tainots class and gets no extra credit for it’s blandness.