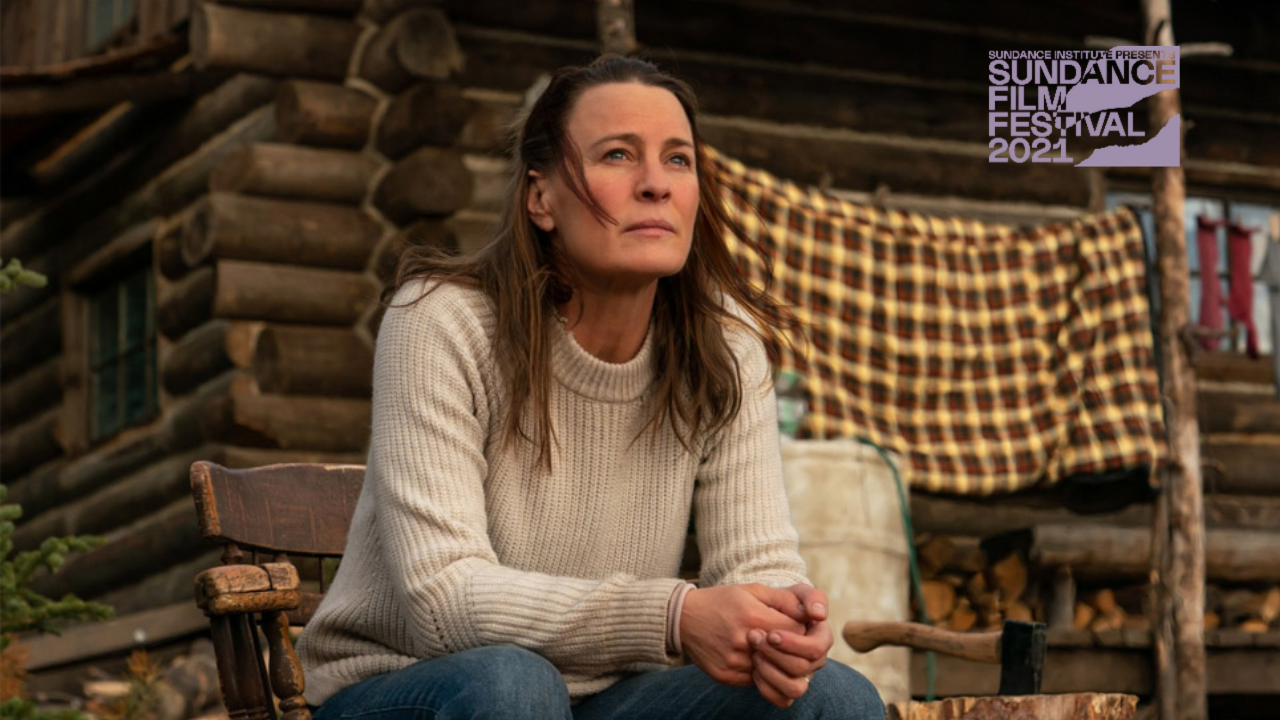 Land has captivating panoramic Rocky Mountains landscapes with a stillness and beauty pervading this simple tale of a woman leading a remote life.  Escaping the day-to-day pressures by living off the grid may seem like a panacea in this ‘on-demand’ world and Land as Robin Wright’s directorial debut explores this impact in a meandering, reflective way.  Land, unfortunately, despite its breath-taking cinematography does not offer anything new.  It is reminiscent of Cheryl Strayed’s Wild in several respects with its portrayal of a woman gradually becoming attuned to nature, but the same level of emotional resonance is absent.

Nature plays a pivotal role within Land to the extent that Wright’s performance as the protagonist Edee seems secondary.  Her character’s name is unknown initially, which reflects her desire to remain anonymous and disconnect from life in essence.  Without such background or meaningful action, it isn’t easy to become invested in Edee’s scenarios.  However, whilst the film is effective in demonstrating that true isolation translates to there being a lack of exposition or any other activity, this device requires a tremendous amount of patience from its audience.

The slow-paced approach to Land may not draw in all audiences but where the film excels is in its cinematography which accentuates the beauty of the changing seasons. The pristine snow in winter and the glorious vibrant colours of the leaves in autumn are delightful to behold.  As the seasons change, Edee’s progress and resiliency over such period are also evident as she learns to hunt and chop wood to survive.  The film relies on the show don’t tell approach as Edee’s memories of family intersperse such moments contrary to her determination to survive in the wilderness and withdraw from human connections. Land demonstrates that whilst we may be able to escape from a problematic situation geographically, an escape from our inner thoughts and pain tends to present a more significant challenge.

As such, Land is a fascinating character study in grief and the various coping strategies that we may employ as a distraction.  However, in choosing to be alone there are no longer any distractions available to help to escape from the pain and Land does not shirk away from presenting the rawness of such emotions within Edie’s carefully constructed microcosm.  It is a strong performance from Wright as Edee. The film’s quiet restraint in exploring such grief has the undesired effect of seemingly prolonging the film’s length which may reduce its appeal to a wider audience.

Unfortunately, the melodramatic scenes of adversity within the remote environs outweigh such tender moments of authentic emotion. Land seems to require the audience to suspend its disbelief in such scenes and query whether someone, such as Edee, wishing to survive in a remote location, may not have undertaken various levels of preparation or obtained the required assistance in advance. Therefore, Land provides that unsettling examination as to the value that we assign to our lives and our purpose.

Robyn Wright has crafted a subtle tale that explores the human condition and our relationship with grief and the need for human connection.  It is a poignant film revelling in its stillness to capture the beautiful essence of nature.  Land, fortunately, steers away from presenting an entirely bleak portrayal of despair as a tender friendship blossom.  As the natural landscape becomes warmer, it is also fascinating to witness the reflective thawing out of Edee’s persona, and the film highlights the power of nature to heal.  To her credit, it is also refreshing to view a platonic friendship within the film without the central female character being consigned to the role of the love interest. Land will have you singing along to ‘everybody wants to rule the world’ whilst being immersed in its tender portrayal of isolation, grief and eventual acceptance. However, it needed to make more of an effort to connect with its audience.