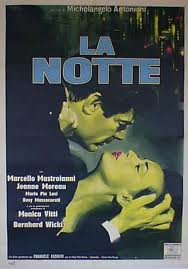 La Notte was helmed by Michelangelo Antonioni (Blow-Up, L’Avventura), stars Marcello Mastroianni (La Dolce Vita, 8½) and Jeanne Moreau (Jules et Jim, Ascenseur pour l’échafaud), and, in 1963, was chosen by Stanley Kubrick as one of his ten favourite films. Marketing this one to curious fanatics can’t be much of a challenge, can it?

And, sure enough, it is a masterpiece of detachment. It tells the story of a day in Giovanni, a successful novelist, and his wife Lidia’s lives, the day when the quiet disintegration of their couple becomes unbearable for both of them. The day he kisses another woman and she “understands”; the day he tells his wife and ex-muse, “I no longer have inspirations. Only recollections.”  Throughout the day’s hours, the two avoid each other; they avoid each other when visiting a dying friend, when at parties and when at home, even when conversing their words bounce off the other’s surface. He’s permanently bored, she’s permanently sad, and though they live together they struggle apart.

The day’s events are mundane and are told as such, the pace is slow, the dialogue is sharp but sparse and subtle. As a result, La Notte, loyal to the European current of its time, does not grab viewers and drag them to its climax; it instead requires devotion. That is not to say it fails to be engaging – au contraire, it sneaks up on and entangles those who do commit to it, on whom I guarantee it will leave a strong, lasting impression. The film’s central performances are fittingly restrained; Mastroianni creating a variation of his wandering manboy from La Dolce Vita, this time an intellectual lost in his thoughts, and Moreau displaying her usual astuteness as Lidia, more self-aware but just as trapped as her husband.

Antonioni’s every frame is a delight; he makes La Notte aesthetically riveting with his superb eye for composition and impeccable use of reflection, lighting, noise and music, chance and form. It is the work of a true craftsman, one who knows how to enhance his characters’ depth and back up his script’s remoteness by way of visuals. The script itself, co-written by Ennio Flaiano who worked on most of Fellini’s masterpieces, is remarkable, striking the ideal balance between conversational banter and catchy wit.

The comparison may be slightly irrational, but I was unable to supress it; thoughts of a Who’s Afraid of Virginia Woolf? – minus the raw cruelty – were lingering in my mind throughout the movie. Though diametrically opposite in treatment, these films are perhaps the two most striking and unforgettable accounts of eroded marriages I have yet to witness and ultimately leave their viewers in the same state of mind, planting in them the same feelings. They create the kind of experience that is not to be missed out on. Also, Kubrick liked it.