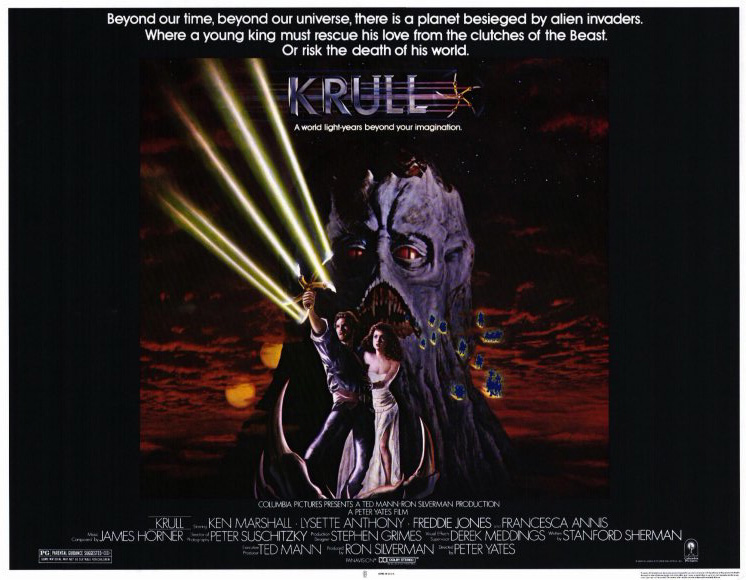 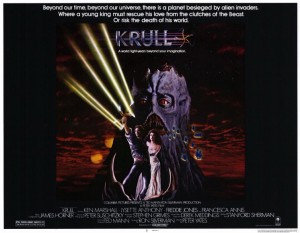 Krull is a film I love.  I watch it at least once a year. This chronic, irrational behavior is due to a personal weakness of mine for late 70s & early 80s hurriedly assembled science fiction movies that rip-off Star Wars.  As a youngOriginal Trilogy devotee, mesmerized and dazzled by A New Hope andEmpire, I found myself scouring the local video store shelves for images of grotesque aliens, fantastical spacecrafts, and galactic heroes (& heroines…I was as big a fan of Alien as I was of Star Wars).  The joyous exhilaration I felt watching those modern yet thematically archetypal escapist fantasies was something I would seek out in movie theatres from that point forward. Of course, back then, I couldn’t even spell “archetype”, I just knew that this shit was cool.  It would be another 10 years before I learned the names Joseph Campbell or Akira Kurosawa.  As far as I knew George Lucas invented Heroes.

Early attempts to “find more Star Wars” led me to films such as Star Crash, Battle Beyond The Stars, The Last Starfighter, Krull and dozens of others, many of which I’ll still watch occasionally (finding these movies on the shelves was easy…the filmmakers’ thoughtfully included the word Star in many of the titles, as well as variations of War, such as Fight and Battle)

Krull‘s story is so like Star Wars that it doesn’t bear repeating. I assume anyone 200 words into a Krull review has seen Star Wars. So, let’s take the “Princess is captured by the evil Dark Lord & must be rescued from a near-impenetrable fortress by a rag-tag groups of virtuous heroes” as read.

Similarities to SW aside, there are some enjoyable performances from Krull’s Brit-laden cast. Main man Ken Marshall does not give one of them. He is whiny and bland, as is his “love” Lyssa (Lysette Anthony). Marshall’s weak acting can almost be forgiven, though,  as the talent surrounding him compensates for his shortcomings. Appearances by reliable performers Liam Neeson, David Battley, Freddie Jones, Alun Armstrong, and Robbie Coltrane are more than welcome.

Krull‘s story is satisfactory yet derivative, and features fine character actors surrounding a couple of dullard leads.  These deficiencies could doom a “normal movie”, but this is no normal movie.

This is an “80s Science Fiction” movie.

That means no CG. That means matte paintings. And green screens. And guys in rubber suits. And scale models. If you prefer FX one can make in their garage, you will likely enjoy Krull (& it’s even more likely that you already do). If you prefer FX one can only make by employing a cadre of highly paid computer nerds, you may have never seen Krull, or will find it quaint.

Most of my favorite Science Fiction films are from the 80s, before James Cameron‘s The Abyss marked the beginning of the end for big-budget practical special FX films in Hollywood (as I noted in my Bad Taste review).  Don’t get me wrong, though, I’m a huge fan of Gollum, Caesar, the Prawns, etc., … I understand the advantages of computer generated imagery in cinema.  Filmmakers are no longer limited by what they can physically create, because anything they can imagine, they can make digitally on a laptop.  I don’t inherently dislike CG, I just really enjoy a good rubber monster suit, and appreciate the craftsmanship involved.

Krull‘s FX do have some glaring deficiencies at times and are not always as successful as intended .  Having said that, any film that showcases a giant stop-motion spider, empty husk alien warriors powered by screaming slugs, a bi-polar cyclops, and an ultimate weapon that is basically a five-pronged shuriken known as the Glaive is not going to have problems holding my attention.  But that’s me.

Most disappointing aspect of Krull – The ultra-cool aforementioned Glaive, (Krull‘s take on the light saber) is only used for about 10 minutes, and proves ineffective against the bad guy.  Our hero must resort to shooting fire from his fingers to defeat the monster. Fire handed to him by his freshly rescued fiance. What? Yes.

Most surprisingly impressive aspect of Krull – The score by James Horner. It conveys  a glorious gravitas that elevates the entire production. One of his best. I’m not kidding.

Krull is a charming, epic sci-fi romp with a generally talented cast that, many years/viewings later, still entertains me….even though it’s dated, kinda dumb, and has a serious lack of Glaive.  No one can deny that it is a severely flawed film, but sometimes the flaws are as fun as the triumphs