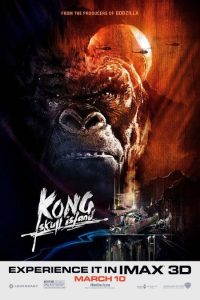 Is it just me or does it seem like Hollywood is running out of ideas? Haven’t we seen a remake of King Kong? Hasn’t this been done and done again by now? Or did the box office success of Jurassic World inspire producers to opt for remakes instead of the road not taken?

Kong: Skull Island (nifty subtitle to induce mystery and provoke fear, isn’t it?) isn’t anything like that. It is not simply a remake of a film that has been remade time and time again. It is what I like to refer to as an unofficial re-imagination of the original. Have you ever wondered what it would have been like if King Kong was not sedated and taken to New York to be pointed and laughed at? That is exactly what Kong: Skull Island explores. In 1973, a group of eager scientists discovers what they thought is an uninhabited island surrounded by tremendous storms. Eager to be the first to explore and geologically map the island, Bill (John Goodman) persuades the US government to abet the expedition by supplying them with the support and expertise of the US Army under demand of Lieutenant Colonel Packard (Samuel L. Jackson) and the bad-ass guidance and protection of James Conrad (Tom Hiddleston), a former British Special Air Service Captain.

The group ignorantly detonate the seismic charges to start mapping, when all hell breaks loose and Kong appears to defend his island, destroying all machinery brought to the island by the apparent mighty US Army. The team’s extraction point is on the other side of the island, an island that is in my mind, a cross between Australia and Texas – everything is bigger and everything wants to kill you. The group soon finds out that Kong is the very least of their worries as the charges attract their worst nightmares out of solitude. Having to defend themselves from hellish beasts trying to kill them as well as the island’s natural inhabitants such as spiders so big that you’ll confuse its legs with a bamboo forest, they try to find their way to the extraction point, before their only way off the island becomes nothing but a fantasy.

With immense opportunity to be as cheesy as xXx: Return of Xander Cage, the film will initially create an insincere atmosphere leaving you wondering why actors like Brie Larson, John Goodman and Tom Hiddleston would opt for such a production. But then you take a few sips of your soda and chew one or two crispy flakes of popcorn and you’ll be grasped beyond belief. The mysterious mood set by peculiar music and gloomy set design pull you to the edge of your seat while Hiddleston proves his ability to break free of the character limits set for him by Thor and The Avengers fans.

Kong: Skull Island isn’t a remake, nor just a re-imagined movie. It is a blockbuster which creates opportunity and characters for a possible Kong trilogy. Just like Jurassic World, it taps into the nostalgia of an existing fan base while introducing it to a whole new generation. It is a great film to watch with friends and a better film to watch with your dad.