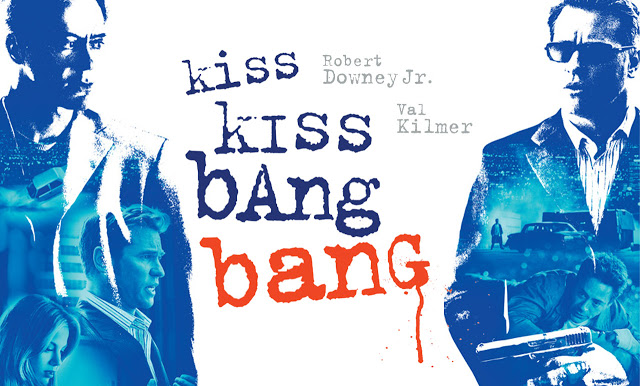 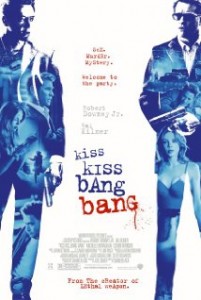 Having written such films as “Lethal Weapon” and “The Last Boy Scout” it is fair to say that Shane Black has a great track record in writing intelligent screenplays full of witty dialogue and memorable characters, and with this film he has done it yet again.

‘Kiss’ marked Shane Black’s directorial debut which may surprise some as it is directed with a lot of visual flair and confidence, Black keeps the story running at a brisk pace while constantly throwing in various twists and turns along the way. While his experience is limited Black has shown that he is a very capable director with this film, he has struck a great balance in making the film relevant to modern audiences while also implementing the nostalgic feel of classic noir.

This film is filled with great performances across the board; however the obvious stand outs are Robert Downey Jr as criminal turned private investigator Harry Lockhart and Val Kilmer as his mentor Gay Perry. Downey provides us with a dynamic performance throughout the film; he has a great sense of comedic timing and is also able to convey real emotion in some of the more dramatic scenes. However Downey is at his absolute best when he is sharing the screen with Val Kilmer, in fact the whole film is at its best when those two characters are interacting. Their relationship is what keeps the film from falling apart and they have fantastic chemistry with each other. The witty banter between the two makes for the funniest scenes in the film with one particular scene involving Russian roulette being a standout.

This is a film that does contain some mature content and tackles serious subject matter like murder, however it is very self aware and constantly makes fun of the fact that it’s a movie. Black is constantly breaking the fourth wall through Downey’s narration, by having text appear on the screen that directly relates to what is being said in the narration, and in one instance having the projector stop working so Downey can rewind it to give further information on a previous event. This technique allows Black to make fun of the various clichés usually associated with these particular films while also enabling him to provide his own spin on them, in turn making the film feel familiar but with its own unique flavour.

While the script is well written the actual murder mystery is the weakest part of the film. The mystery is interesting and it provides some memorable scenes, however towards the end it gets a bit too convoluted and muddled for its own good. The film introduces too many secondary characters in the second act that don’t get much screen time and only further complicate the plot.

As I mentioned earlier, the film doesn’t take itself very seriously so a complicated plot can be forgiven especially when the rest of the film is so well made. The fact is that “Kiss Kiss Bang Bang” is an extremely enjoyable film from start to finish, filled with memorable characters and Shane Black’s distinct dialogue. The story may not have the emotional payoff that people want however it can’t be denied just how fun it was along the way.