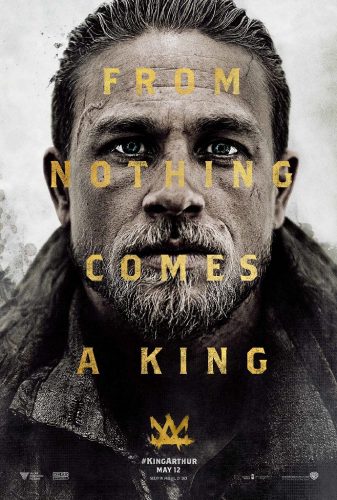 I like Guy Ritchie, I like his style, and I enjoy his approach to storytelling. The writer/director understands the unique ways in which one can convey something as simple as a montage and how such interpretive change can alter the reception and/or investment of an audience in something as simple as a montage. If you’ve seen any of Ritchie’s s previous films, such as Snatch, RocknRolla, or either of the two Robert Downey Jr. Sherlock Holmes adventures, then you’ll certainly recognize the marks of the director in his latest film; another re-telling of the King Arthur story. It was inevitable the legend of Arthur and his knights of the roundtable would eventually get their own gritty re-boot, but when it was announced Ritchie would be the one bringing said gritty reboot to the big screen the trend all of a sudden didn’t feel so tired. Too bad we spoke too soon for despite the fact Ritchie gets a director, co-writer, and producer credit on this $175 million flick-it reeks of studio intervention and countless pacing issues due to as much. Before we get too far into this though, King Arthur: Legend of the Sword isn’t an outright train wreck and has some rather inspired and interesting moments whether that be in character and set design, some of the performances, or of course the notable editing and inventive storytelling. Still, at the end of the day, this is a film whose parts are greater than its (overlong) summation and unfortunately that leaves a rather forgettable taste. Bland. Bland is the word I’m looking for. And while one might have advised Ritchie and the gang against rebooting a brand name no one seemed to be particularly interested in (the last incarnation of King Arthur came just over a decade ago and only delivered $200 million worldwide) there was always that hope Ritchie might put enough of a directorial stamp on the material that this new version might come to be more than justified. There are hints of Ritchie’s British blue collar mentality and sense of humor that pop up throughout that hint at what could have been, a medieval Lock, Stock if you will, but more often than not King Arthur: Legend of the Sword becomes a bloated, CGI-fest that is more hollow spectacle than engaging character drama.

Whether you’re familiar with the tale of King Arthur or not Ritchie’s version of the events are fairly simple to follow. Ritchie’s screenplay, which he co-wrote with frequent collaborator Lionel Wigram as well as Joby Harold (Awake), begins by showing us the betrayal of King Uther (Eric Bana) by his younger brother Vortigern (Jude Law). Vortigern sacrifices his wife to an Ursula-like sea snake in order to manifest some supernatural power that allows him to best even Uther and his precious Excalibur. This confrontation naturally takes place as Uther is setting his wife and only son out to sea so that at least their lives might be spared, but even if one isn’t familiar with the legend of Arthur I imagine they’ll be able to derive how things play out from this point. Arthur survives, his mother-not so much. Arthur slips away as his father battles his uncle to the death washing ashore not too far down the line in a village where he is raised in a brothel and told he is the spawn of a prostitute. Ritchie speeds us through the adolescence of the young Arthur, displaying with his kinetic editing techniques how the young man becomes a well-versed player in the streets of Londinium (the settlement established on the current site of London via AD 43), a keeper of the finances at the brothel, and a sort of protector of the women that work there. Point being: Arthur (now played by Charlie Hunnam) grows into a wise and compassionate young man that cares deeply for his friends and associates and will do what need be to protect them. Meanwhile, ole Vortigern is ruling over Camelot as if it was his birthright and has been forced to seek out the surviving bloodline of his brother as Uther’s son is the only one who might pull this mysterious sword from this mysterious stone that has appeared just outside his castle. Through a series of events Arthur is captured and forced to try his hand at removing the sword and I think it’s safe to say we all know he’s quite successful when it comes to this particular task. Is the movie itself as successful at doing what it sets out to do? Again, not so much. The remainder of King Arthur: Legend of the Sword hits the beats of Arthur resisting his journey, being shown the miserable future he will give way to by resisting that journey, which then forces him to embrace his journey and ultimately his destiny as king. The predictability isn’t what relegates this to mediocrity though as the hero’s journey can still be compelling, interesting, and certainly entertaining if told with skill and vision, but what skill and vision Ritchie possesses has been reduced to CGI rubble here.

Much of what is detrimental to Legend of the Sword are the easy targets one might have picked out when viewing the trailers for the film. Sure, there is a lot of overdone CGI. Yes, the tone is weird because at one point it’s this seemingly grand blockbuster and other times it’s a street-level gangster tale. Does the world in which this takes place openly accept magic? Absolutely. Does it ever reveal the face of Merlin and welcome such a facet so as to show such a desire to explore that facet further? Negative. There are highlights between these bleak conventions, but none of them are enough to rescue the film from the doldrums of mediocrity. For instance, I was hoping, given Ritchie’s slightly tongue in cheek approach to his films, that his version of King Arthur might embrace the mysticism that is now one with this time period in popular culture, but without fully leaning into it. That the supernatural elements would play a part, but that the main cast of characters would still be fully aware of how outlandish and weird it is that such capabilities actually exist. Rather than sticking with the attitudes Arthur and his friends appear to have early on in the film, like when they recount a story of their encounter with a group of Vikings to a high ranking Blackleg AKA Vortigern’s army of minions, Arthur and his crew accept without question the existence of such magic at the appearance of a Mage (Astrid Bergès-Frisbey). Not to be accused of being dismissive, I can acknowledge that some attempts at humor are made when Hunnam’s Arthur first comes face to face with the Mage, but this is different as he still has no trouble accepting the fact such an individual might exist. To bring out Arthur’s resistance or at least his condescension towards what Vortigern has so willingly given himself over to might have been a more interesting arc than that of Arthur trying to resist the sword and Vortigern doing whatever it takes to remain in power despite the fact we have no real idea why he craves such power. Unfortunately, the screenplay cares little about making us feel anything for any of these characters with only the “wow” factor of how we got from point A to point B seeming to matter. There is hardly any kind of character development attempted in the film as it is depends on the charisma of the talent involved to relay the reasons we should feel any type of sympathy or hate towards these people. By the time the credits roll we know everything is in place for an actual King Arthur movie, but that’s only because the movie tells us so-we don’t actually care and certainly aren’t invested enough to come back for what this movie was supposed to be.

So what is left? What might breathe life into this stagnant summer blockbuster other than that of a unique directorial touch that was extinguished just as quickly by the studio that hired him? Well, I really enjoyed Daniel Pemberton’s score and how it made up as much as it could for some of the more drastic lags in the narrative. It introduces a texture to the film that, without it, would almost give the film fully over to what anyone with a budget this size and talent this good could produce. Pemberton’s score is especially effective when Ritchie is given free rein to do what he does best and it is in these sections of ultra-stylized storytelling that Legend of the Sword is at its best because it stands apart. Throughout the entirety of the picture my thoughts couldn’t help but to be distracted by the thought of Ritchie adapting the King Arthur story to a modern day English setting and finding something to say in the themes and ideas the story raises rather than simply rehashing the same old, same old with nothing new to add to the conversation. Hell, it would have cost a lot less too. Even if Ritchie really wanted to keep in line with the medieval setting he could have applied those aforementioned trademarks to an original story that takes place during the period without having to necessarily re-tell a story that has already been told countless times before. Whatever the drive might have been there were certainly other, more interesting avenues the director could have chosen to quench his major studio/medieval epic thirst. That said, Hunnam is a strong presence here and would make a fine protagonist in a Ritchie gangster drama with his cocky swagger no matter his social status. Law is dependable enough as the foil despite the fact we never really buy the guys actions due to a lack of any development at all, but the performance is serviceable and you can see Law is giving it what he can. The same is true of the supporting players in Djimon Hounsou, Aiden Gillen, Kingsley Ben-Adir, and Neil Maskell, but they are given so little to work with that they don’t stand to be very memorable. Worse, we aren’t emotionally invested in their plights even when the movie tries to use them to such an advantage. Did there need to be another King Arthur movie? No, and given what Ritchie has brought us we have what is maybe worse than having a truly terrible one-an indifferent one.