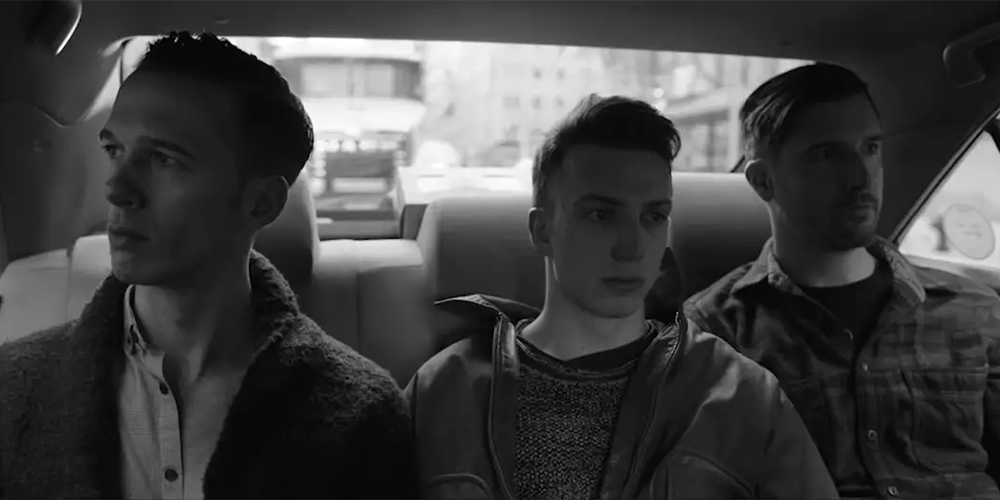 Kill The Monsters is Ryan Lonergan’s second feature and follows a trio struggling to save their relationship.

The films starts with young Frankie, depressed and stuck in a dead-end job. Frankie comes home to his two partners, with whom he is in a relationship, both closely resembling relationship stereotypes. Patrick is practical and suffocating while Sutton is fun and careless.  It later turns out Frankie is sick. Of what disease, we do not know but it is not cancer. The trio decides to travel across country to look for a doctor they believe will cure Frankie of his general “malaise”.

Lonergan opens the film with Benjamin Franklin’s quote “ Democracy is two wolves and a lamb voting on what to eat for lunch”.  He later explains that the film is more of an allegory of American Democracy and strategically structures it in chapters named after key points in American history. Along the way, the trio argues, separates and reconciles but never looses an opportunity to sell their working relationship arrangement to anyone that comes their way.

Inside, the scenes feel cramped and the conversations are, although very familiar, a bit long. Thankfully, the exterior scenes are beautifully shot in black and white and Lonergan fills the film with long tracking shots of American landscapes with sonorous classical music, almost giving it a patriotic feel. The best scenes come when the camera opens up to extreme wide shots of tourist attractions while the protagonists argue in a voice over. It takes us a few minutes to locate them, lost in an array of tourists.

The dialogues can be witty and the film never looses its rhythm, until the abrupt ending where the trio hit yet another obstacle, but not important enough to do anything about it.

Lonergan seems to love his country as much as he loves films and as in any relationship, it is not always because it is working that we keep going.