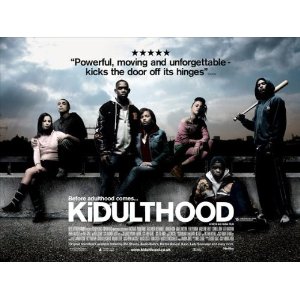 Written by and Starring Noel Clarke, KiDULTHOOD takes a gritty look at a day in the life of a group of 15 year olds living on the streets of West London. Priding itself on the way it has been researched, KiDulthood attempts to recreate the challenges faced and mistakes made by the group of teenagers the film centres around. Recreating the language and styles of the ‘street’ it became a respectful addition to the UK Film Councils portfolio.

Utilising a young and relatively unknown British cast, the acting is of a decent calibre- Noel Clarke gives the stand out performance as the ‘badman’ Sam., while the supporting cast including Jaime Winstone(Made in Dagenham)  and Nicholas Hoult(X-Men:Fisrt Class) give decent enough performances to give the film substance.

Without a big budget to resort to, the film-makers have created some interesting shots, excellent camera work and decent directing by Menhaj Huda give the film an edge that other films of similar style often fall short on. Comparisons can be drawn to Michael Caines ‘Harry Brown’- which takes the examples of KiDULTHOOD to heart in its final product.

The film has been criticised for glorifying the violence and drug abuse of the estates in West London and to a degree I agree, it seems to try and justify the bad nature of the people who live in the neighbourhoods where the film is set. While it does go over the top at times, the undertones of accepting the violence can be overlooked as ultimately it does attempt to promote a message of forgiveness and change.

As I mentioned it is a product of the UK Film Council and a credit to the ideals of the council is the soundtrack, using British bands and DJ’s, which despite the music perhaps not being to everyone’s taste, it  reflects the scenes in which they are used fantastically well.

It also allows viewers to see a far less glamorised side of the nation’s capital than they have come to expect from films like Notting Hill and Love Actually and while it may be hard-hitting it is refreshing to see a drastic change in the perspective in which others must view the UK.

KiDULTHOOD is a very good piece of filmmaking; consistent acting, good scripting and a clever shooting style combine to give the viewer an unexpected experience that they will not forget quickly