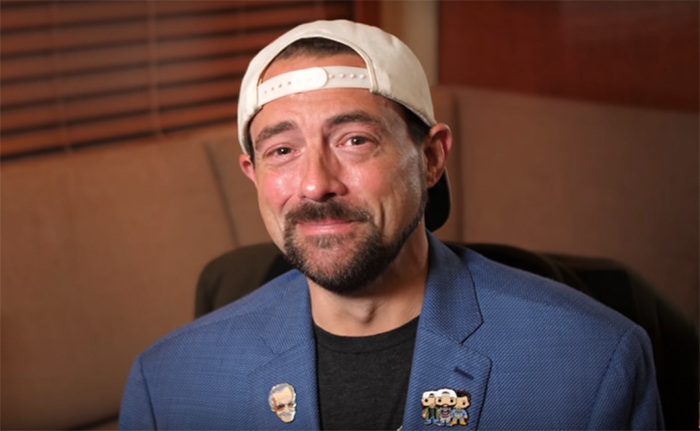 “After a lifetime of referencing the movies, the movies referenced me.”

Kevin Smith, the beloved cult director behind such films as Clerks and Dogma, posted a video yesterday talking about his response to the late, great Stan Lee’s cameo in Captain Marvel (FINAL WARNING FOR SPOILERS).

In a memorable sequence, Captain Marvel is walking along a train, studying the passengers, trying to discern which of them is a shapeshifting alien Skrull. As she walks past hordes of passengers, she comes to a sat figure hidden behind a script. As the camera lingers, the title font for Kevin Smith’s 1995 movie Mallrats can be seen on the front page, and as the script lowers we see it’s Stan Lee, practicing his line “Trust me, true believer!”

After a genuine, heartwarming smile from Stan, Captain Marvel nods, and keeps walking.

“To see my friend, who’s no longer with us, in a cameo is thrilling enough,” Kevin Smith said, during the video, “To see that cameo, in which Stan was playing himself, getting ready to be in my movie in 1995 is like…”

The director trails off, clearly emotional, before describing how Marvel Studios chief and CEO Kevin Feige had called him and told him about the cameo in advance, shortly after Stan’s unfortunate passing. The two shared a moment of grief with one another, and Smith thanked him.

“Years ago, because I’d always loved him, I put Stan Lee in a movie,” Smith continued, fighting back tears, “Then 24 years later… he returned the favour.”

“Thank you to all those cats over at Marvel, man. Like, that motherf*cking Oscar? Pst. This? That’s my legacy. Are you kidding me? They’ll be watching that f*cking Captain Marvel movie long after I’m out of this world. And some kid in the future, some quasi-alien kid from planet Trollfaz, as they learn about Earth culture, is gonna be like ‘What was a Mallrats, mother?’ and someone will have to go look me up on… whatever version of Wikipedia exists … That helps keep me alive just a little while longer, man.”

Watch the full video, below:

The Sesame Street Movie Now Has A Release Date

Tom Holland And The Russo Bros. To Reunite On Action-Drama Cherry