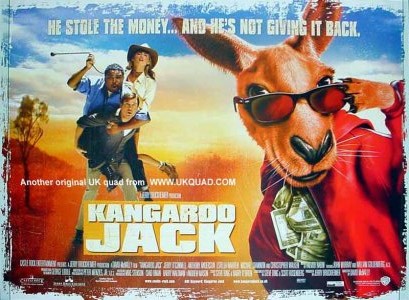 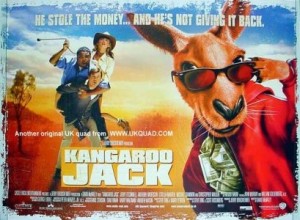 2004, the year that Kangaroo Jack exploded into the cinemas worldwide, I assume you remember it vividly, no? Neither do I. Maybe it is because Kangaroo Jack was a straight to video release and was overwhelmingly panned by critics on its release scoring an extremely low score on most reviewing websites across the web. But, since the film is a comedy based around a Kangaroo that steals a lot money you can only expect it to go so far, but with its 60 million dollar budget you would have expected a slightly more polished plot to the film. Speaking of the plot, let’s get to it.

The film opens on a sunny beach in 1982 where a young boy named Charlie Carbone (played by Jerry O’Connell) is about to become the stepson of Salvatore Maggio (played by Christopher Walken). Maggio is a respected vicious mobster, so basically your typical mobster character in any low budget film you might see. On this sunny day Charlie meets his new best friend Louis Booker (played by Anthony Anderson) who saves Charlie from drowning in the seas strong current. This was no accident as ex con Frankie Lombardo (played by Michael Shannon) had intentionally thrown the football deep into the surf, which at the same time would make him look like he wasn’t responsible for the consequences afterwards.

The story jumps to 20 years later where we see Charlie has his own beauty salon originally bought by Sal. Yet, Sal’s goons arrive every week to take 80% of the profits, leaving Charlie struggling to save money to make improvements to the salon. Louis still is Charlie’s best friend and comes into the salon to ask a favour from Charlie, when Charlie hears the favour his first reaction is “This sounds illegal” but reluctantly agrees after Louis plays the ‘I saved your life card’. After they fail the job of hiding some stolen goods the pair’s actions get some of Sal’s goons arrested by the police. The bitter Sal then gives the pair a last chance to earn his trust back, he asks them to go to Australia to deliver a package to a Mr Smith, the pair has no choice but to agree to Sal’s plan and fly to Australia.

The films plot does seem obvious from after this point and you don’t expect much else, but I leave it to you to discover how a normal Kangaroo fits into all this mess.

I suggest this film as a way to kill 89 minutes and nothing more. You may get a few cheap laughs from it, a few even being fart jokes, but ultimately I suggest you watch this film if there is nothing else on.

Just Go With It