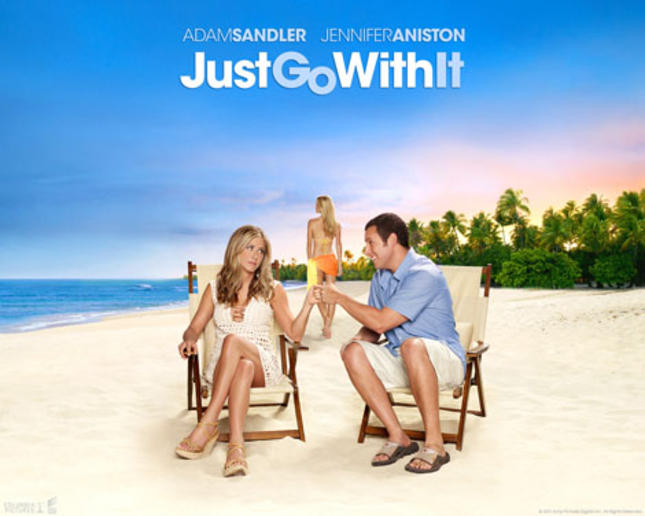 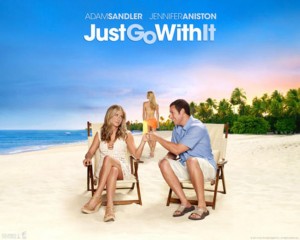 For 40 minutes of ‘Just Go With It’ we have a very sweet & somewhat funny movie, the problem is it’s 1 hour and 50 minutes long.

Here’s the plot: a guy does whatever it takes to try and get some action with what appears to be the most gorgeous woman on earth.

It wasn’t so much the scenes with ditzy, gorgeous women who walk in slow motion that he works hard to pick up by pretending he is married (that’s right), the movie’s superfluous scenes and ones that last too long, and characters (Eddie played by Nick Swarson, the “comic relief” friend and the nanny, who is anything but), kids talking back to their parents as if they were entitled to everything, or even the predictable back story. It wasn’t even so much that Adam Sandler tries to pull off playing a plastic surgeon, which he didn’t. It also wasn’t the inappropriate conversations several characters had when they met someone for the first time. What I just couldn’t buy was that we’re supposed to believe Danny Maccabee (Adam Sandler) would jump through the rings of Saturn (notice I didn’t say hoops) to win the affections of a the blonde hottie Palmer (Brooklyn Decker).

Not only do we see minimal character development & interaction between these 2 and why he is so into her other than her body, but the groundwork is never laid for Danny to justify creating fake relationships, charging thousands of dollars to go to Hawaii, and potentially jeopardizing his great current relationships just to “get some”. I don’t think so.

In the beginning of the movie Palmer seems quite perceptive and picks up on his body language and clues rather quickly, reading him well. Strangely this ability disappears later on when he is obviously lying through his teeth about his divorce from a woman named Devlin and having kids that he obviously made up on the spot? Why is she even considering this relationship, is he THAT amazing? One would think not. By the way, what 6th grade teacher wears a string bikini in front of children?

Like most Sandler movies riddled with superficial characters we never really see much depth or ability from, ‘Just Go With It’ doesn’t disappoint. Although Sandler was not at his best, I would have preferred just to watch him and Aniston throughout the movie. He funny lines revolved around how expensive things were like we he commented about a $1,700 pair of shoes, “Did Mickey Mantle sign these?”

Jennifer Aniston plays Katherine, Dr. Maccabee’s office manager and friend who gets looped into his master plan. She plays the friend card well, even though her character seemed very much like her role as Rachel in Friends and I never for a second bought her as a mom. Interesting that Danny never becomes interested in her until he sees her in a bikini, but you know, there’s no way someone could possibly tell she was hot fully clothed.

Comic highlight moment was the scene with Kevin Nealon playing Maccabee’s friend who has undergone one too many botox surgeries, now that was good stuff. Didn’t care much for the clumsy, goofy version of the Pretty Woman scene where Richard Gere takes Julia Roberts shopping for the finest clothes, as I fail to understand why Katherine has to doll up just to meet Palmer one whole time. Any, why would Palmer want to meet his ex-wife so early on in the relationship – they’ve known each other, for what, like a whole week?

The most interesting part of the story is the friendship that develops between Danny & Katherine, being familiar for much of their life they can appreciate the idiosyncracies of the other person, and have a good sense of familiarity about each other. The scenes with just the 2 of them were sweet and genuine.

The daughter was cute, putting on her fake Cockney dialect, and the boy wouldn’t have been more forgettable, as the dead-pan thing just didn’t work on him, or was he depressed? Of course you had to have the obligatory cliche romcom scenes like people are up late at night restless because they aren’t sure they are making the right decision

Cameo appearances by Nicole Kidman (who steals the show), one of Katherine’s former sorority sisters, and Dave Matthews are cast as a married couple vacationing in Hawaii at the same time Katherine is there with her kids and Danny.

There is no possible way most of these events could occur in the real world, take for instance Katherine’s friend Eddie, who, in an attempt to Devlin (Nicole Kidman) from Palmer, who may learn the real truth about Danny, instead is hell-bent on keeping her underwater while no one jumps in to assist the helpless victim. And she even agrees to go to dinner with this person. I believe this isn’t a funny moment, but one that agitates and makes one wonder how deeply disturbed this individual is. The majority of the humor was more gross and inappropriate than funny.