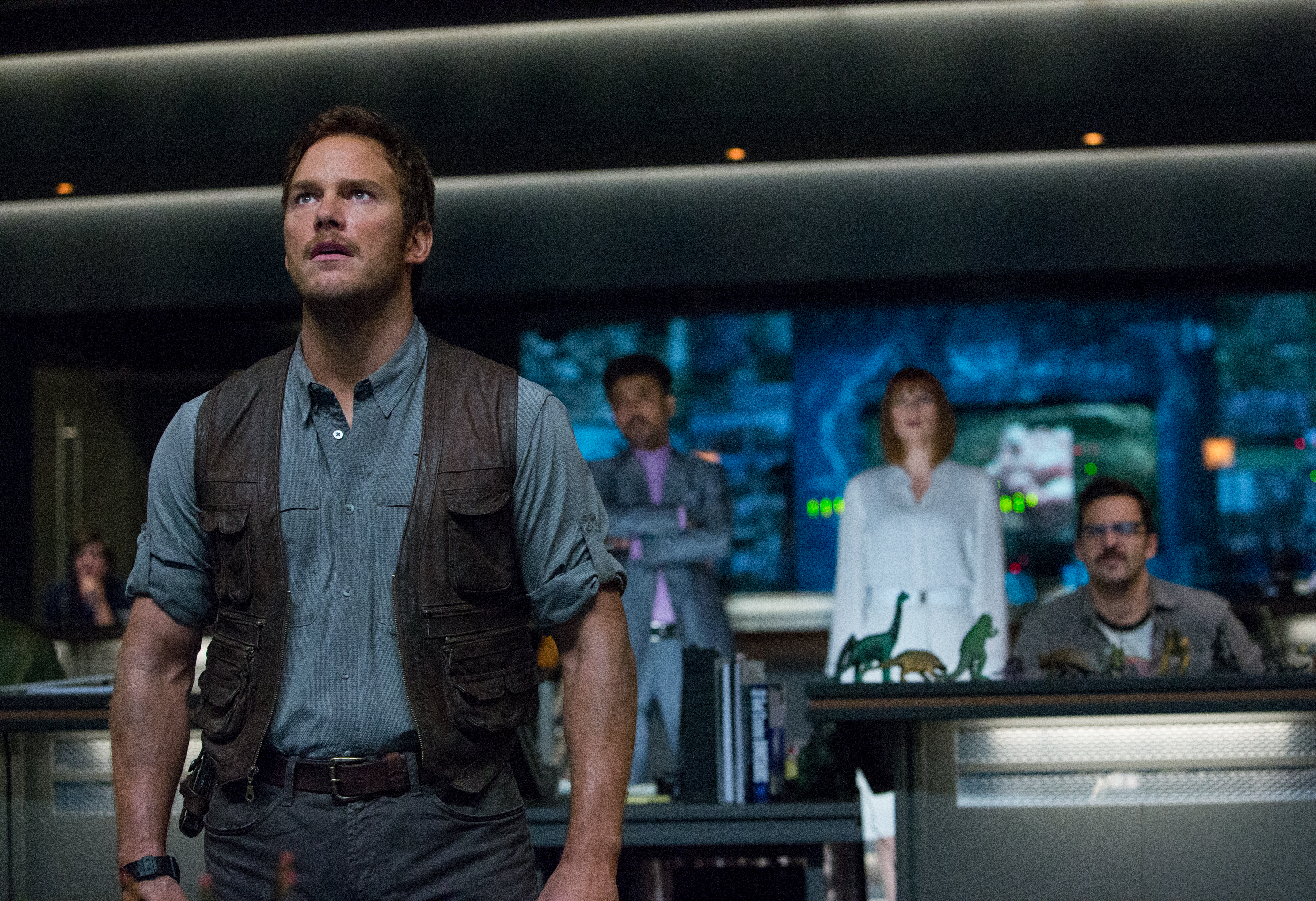 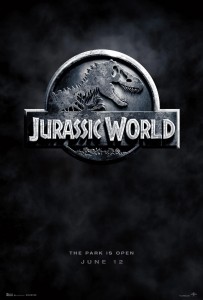 Come what may, the initial experience one has with Jurassic Worldcan certainly be seen as nothing short of impressive. Considering my leveraged expectations and my unease around any Jurassic Park sequel to be able to pick up on a solid enough story that validated continuing the series I went into the fourth film in the dino-series hoping for the best, but expecting the worst. Fortunately, director Colin Trevorrow (Safety Not Guaranteed) and his team have found a fine excuse to return to the “clouded island” as this new film is set in real time, twenty-two years after the events of Steven Spielberg’s original. The events of that film are acknowledged and referenced in a way that proves, despite his continuing mishaps, that Dr. John Hammond (the late Richard Attenborough) was never able to give up on his dream of creating this tourist attraction featuring living biological dinosaurs cloned from prehistoric DNA. In light of this, Trevorrow and the three other credited screenwriters on this gig, present the audience with a vision of every possibility and beyond that Hammond could have ever imagined and that Dr.’s Grant and Sattler along with the pleasingly pessimistic Dr. Malcolm denied spectators so many years ago. While The Lost World and Jurassic Park III felt more like missed opportunities than anything else, the one thing Jurassic World indisputably gets right is that it takes advantage of the opportunity set up in the first film by delivering the audience to a fully functioning Jurassic Park and not only puts on display how it could actually work, but shows that it has been running smoothly for some time. It is somewhat refreshing that Trevorrow and his script don’t focus as much on the aspects of man again attempting to play God despite the main conflict here being an extension of what Dr. Hammond was doing in the first film, but rather this movie has its sights set on something a little more current, slightly dumb when first hearing the pitch and yet ultimately rewarding in realizing there has been some serious thought into where to take such a strand. Without saying much more, Jurassic World is first and foremost a fun summer thrill ride that doesn’t take itself too seriously and delivers on what it knows audiences want from it.

Trevorrow is also cautious of how much is too much when it comes to referencing the first film, but does so in restrained, thoughtful ways that are pleasing to those who found affection in the considered summer masterpiece (a blink and you miss it shot of a car mirror showing a raptor running after it is a prime example). Our first shot after the opening credits is that of a large foot stomping down onto a snowy terrain. We naturally believe it to be that of a prehistoric creature, but it turns out to be nothing more than that of a birds foot, a nice nod to the theories of Jurassic Park‘s Dr. Grant as played by Sam Neill. It is in this snowy climate that we are introduced to an all-American family consisting of mom Karen (Judy Greer), dad Scott (Andy Buckley) and their two sons Zach (Nick Robinson) and Gray (Ty Simpkins). Karen and Scott have apparently hit a rough patch in their relationship and are attempting to deal with the ins and outs of a divorce and so, to get the boys away from all the negativity, they ship them off to Jurassic World where Karen’s sister, their Aunt Claire (Bryce Dallas Howard), runs the show. Having not seen her nephews in several years and being the typical workaholic, detached from any actual reality archetype that Claire is she is forced into awkward conversation with them upon arrival before pawning them off on her assistant (Katie McGrath) so she can attend to more pressing matters such as a meeting with park owner Simon Masrani (Irrfan Khan) who has flown in to see his latest attraction. Attendance is somewhat down as Claire states that for kids today, seeing a Stegosaurus is akin to seeing an elephant. In lieu of simply creating some new, unique way to view the dinosaurs Masrani gives the go ahead to his scientists, including Dr. Henry Wu (BD Wong returning from the first film), to engineer a new breed of dinosaur. Naturally, things go horribly wrong and so Owen Grady (Chris Pratt) a Velociraptor expert and trainer is brought in to help try and contain the situation while InGen head of security Vic Hoskins (Vincent D’Onofrio) wants to utilize the bond between Owen and his Raptors as a force in the field to be reckoned with; a new frontier in warfare if you will.

While it is this final plot strand that feels somewhat relegated to subplot territory in the actual movie it is clearly the one that will continue to push the series forward should Universal decide more sequels are necessary (and don’t worry, they will). While this aspect and D’Onofrio’s character in general may be one of the lower points of an otherwise straightforward “race against time” thriller what I enjoyed most about Jurassic World‘s mentality was its ability to feel about itself the way it anticipates a large portion of its audience will feel about it. Taking over the Sam Jackson role from the first film Jake Johnson (New Girl) plays the park’s tech-savvy operator who has something of an affinity for the original park that seems based on little more than nostalgia and not the actuality of the situation. This kind of feeling is what those who grew up with the film or have come to enjoy it over the last two decades might bring to this latest incarnation. They want to enjoy it, but there is caution and Trevorrow understands that as he allows small bits of self-referential material to seep into his movie. The moment Johnson’s Lowery begins disparaging Howard’s Claire for allowing companies to sponsor attractions and jokingly saying she might as well let them name the dinosaurs there is a singe of commentary on how much product placement is necessary and how it can go too far. As much as Jurassic World is littered with product placement (it is a theme park, after all, and each make sense within the context they’re used) in the climax of the film many of these popular logos see themselves destroyed by the films own creation, the Indominus Rex, which only serves as further commentary on the trend not to mention the existence of the dinosaur itself being a statement on humanity’s excess and need for more despite already being surrounded by the unbelievable. In many ways, while product placement is seen by many as a necessary evil, Trevorrow takes advantage of the opportunity he’s been granted by allowing the sentiment of many of his characters to echo that of many audience members who will see Jurassic World as nothing more than a quest for more profit that will crush their childhood memories and lets them know he understands where they’re coming from and in embracing this idea the film feels all the more earnest.

Beyond D’Onofrio’s subplot and Johnson’s pointed reason for existence the overall concern of the film is hunting down this genetically engineered Indominus Rex with Owen and Claire teaming up to save Zach and Gray who have wandered off from their supervisor to explore the park further, subsequently placing themselves right in the path of the escaped Indominus Rex. Taking advantage of the genetically engineered portion of the story the film is able to do some really cool things with its big bad dinosaur while, for the most part, Pratt’s Owen leads a cast of rather dumb people (unfortunately including Howard’s Claire despite it seeming obvious she’d have to have some brains in order to get the job she has) to safety through a series of smart and visually stunning sequences. While Spielberg kept his dinosaur practice to a grade right above Jaws in the original with the sequel feeling even somewhat more restrained minus a handful of money shots and the disjointed ending it was the third film that went all out and lost the magic of what being able to see real dinosaurs actually meant. With World, Trevorrow lathers on the park-friendly creatures such as baby triceratops in a petting zoo or a sequence including the 60-foot aquatic dinosaur called the Mosasaurus that is truly incredible. Concerning his central dinosaur though, the director hues very close to Spielberg’s technique in only showing portions of the monster until the necessary timing comes in which they really go for it causing the reveal to hit home. Trevorrow is unafraid to show the wrath of these animals as a sequence involving a helicopter and a swarm of airborne dinosaurs including Pteranodons and Dimorphodons unfolds in particularly brutal fashion as is the cause of Owen’s realization the Indominus Rex is not simply killing to eat, but for sport. This opens the film up to a genuinely moving scene that includes Owen, Claire and an animatronic Apatosaurus that in contrary to the “bigger, better, cooler” Indominus shines light on the real wonder of the park. To say all of this is to say thatJurassic World has a lot going on and while it could certainly be trimmed down, more of it works than doesn’t and it’s always presented in a fashion that, most importantly, keeps things fun which is all it really needed to be.