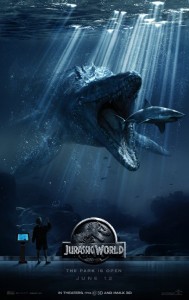 The events of Jurassic Park were nightmarishly thrilling, and are etched into many a mind along with only the best of the best cinematic moments of years gone by. The events don’t, however, seem to be etched well enough into the minds of those running Jurassic World, the massive dinosaur theme park that would leave original visionary, John Hammond, beaming with delight. Set twenty-two years after those fateful events, the fully functioning theme park that now occupies Isle Nublar faces dwindling crowds, as visitors grow weary of familiar attractions. In a bid to draw back the masses, a corporate mandate oversees the creation of a new attraction in the form of a hybrid dinosaur, the Indominus rex. Happily for us, the fun merely begins here; although I am sure the island’s occupants would strongly disagree.

Effects well advanced for their time were what made the original films stand out, and if the effects were good then, they are phenomenal now. The dinosaurs are so realistic; every twitch on their face as they breathe draws you further into the frantic chaos that unravels. Jurassic World certainly ups the ‘wow’ factor, leaving you awestruck in childlike wonder. There is no comparison to experiencing the might of some of earth’s most fearsome predators, with which humans could most definitely not share the planet. The narrative world grows infinitely vaster as new habitats are explored and new exhibits revealed. As Hammond would insist no expense be spared on the park, it seems no expense was spared on creating the films environments, which are truly a spectacular sight.

An early released scene, featuring Chris Pratt’s Owen Grady and Bryce Dallas Howard’s Claire Dearing debating the park’s new addition, received a brutal assessment from Avengers helmer, Joss Whedon. The apt description is unfortunately not limited to that scene, as the “70’s era sexist” theme seeps further into the plot than could have been intended. Apart from some dodgy dialogue and an incredibly ill timed love story, the leads pull off their roles well. Owen embodies the essence of an alpha male, quite literally when leading a pack of Velociraptors, and Claire, despite her stickler tendencies, proves that she can hold her own, even if it is in heels throughout.

Jurassic World explores an interesting human condition: our tendency to bore easily. In a world where tech grows more refined by the day, and scientific leaps are becoming more regular, there is little left that truly amazes us. So when dinosaurs on display have become the norm, people will naturally want more. This in turn invites scientists to push the limits of what is possible; too far in this case. The park’s geneticists experiment with an ancient, extinct species, in an attempt to create bigger and better, without full knowledge and understanding of the potential consequences.

While the geneticists play ‘design-osaurus’, an enclosure is created that proves completely unsuited to the formidable creature it is intended to contain. Far more intelligent and subsequently more dangerous than they could possibly have imagined, the Indominus rex renders the park’s resources and infrastructure largely inadequate. In an attempt to swiftly clear up a potential financial and reputational disaster, poor planning and lack of preparedness only exacerbate the situation. Jurassic World’s shiny new addition is quickly figuring out where it belongs in the food chain, and what they don’t want it to realise is that it holds the top spot.

You would think a genetically modified dinosaur would ring instant ‘bad idea’ alarm bells, but failure to see the magnificent creatures for anything other than assets on a spreadsheet means that history is bound to repeat itself to an epic extent. The action certainly doesn’t hold back; these creatures are built to kill and the film shows their immense power with chilling consequence. To top it all off, references to the original films, mostly due to Lowery’s (Jake Johnson) fondness for collectibles, serve as delightful treats to fans. Jurassic World is not perfect, but will no doubt be a colossal crowd pleaser.