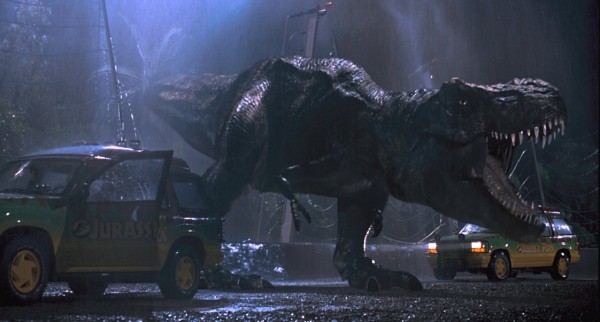 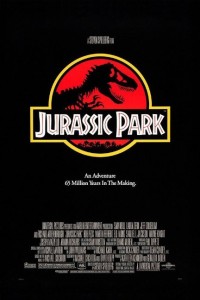 When asked why children are fascinated by dinosaurs, palaeontologist Dr. Jack Horner replied “Well dinosaurs were big, different and gone.” In 1993 a film about impossible science used impossible special effects to bring dinosaurs back to life. ‘Jurassic Park’ would go onto to be the highest grossing film of all time (for a while at least) and spawn a franchise to rival ‘Star Wars’ but what is it that 22 years later still has people interested in it.

The story tells of a world where science has managed to clone dinosaurs from DNA found in fossilised amber. They are contained in a theme park on a remote island by eccentric billionaire John Hammond (Richard Attenborough) who before the park opens to the public has to get it signed off by a group of experts, a palaeontologist Alan Grant (Sam Neil), palaeobotanist Ellie Satler (Laura Dern) and ‘chaotician’ (mathematician to you and me) Ian Malcolm (Jeff Goldblum). However when a bit of industrial espionage co-insides with a huge storm the parks power fails leaving the dinosaurs free to roam and devour who ever they see.

Michael Crichton had been troubled by a story he was trying to crack about a recreating a pterodactyl from fossil DNA since 1983. He went through several iterations until he happened upon the idea of a dinosaur theme park. Steven Spielberg, having worked with Crichton on the television hit ‘ER’, was fascinated by the premise and wanted to bring it to the big screen and so a screenplay was written. It would take a further ten years before it was eventually released with Crichton publishing his novel of ‘Jurassic Park’ in 1990. David Koepp was brought in to oversee the script rewrite and managed to work it more towards a family orientated audience thus finally cracking the films secret.

Spielberg, whose last film ‘Hook’ had difficulty attracting an audience, returned to more familiar territory taking the suspense thrills found in his early hit ‘Jaws’ and combining it with the action adventure of ‘Indiana Jones’. It was a combination that worked to great effect allowing a much broader audience to relate to it. His direction in the film is expansive when it needs to be encompassing the majesty of the animals on screen and then shrinking back to allow more claustrophobic fears to play out.

There are two absolute master pieces in Spielberg’s directing canon in ‘Jurassic Park’ and even though they vary in scale the both contain some brilliant subtle moments that really reveal Spielberg to be a true Hollywood original. The first is, of course, the T-Rex attack sequence where most of the action is seen as POV shots though the windscreens of the cars as the gigantic animal breaks free of its paddock. This wasn’t how monster movies were traditionally shot however normally taking the route of showing the whole beast as much as possible. Here Spielberg makes this a much more personal experience. The moment the Rex holds its eye up to the window and its pupils dilate we are completely sold that this is a very large dinosaur and no one is safe. The ‘eye at the window’ motif is something he brings back during the impossibly tense Raptors in the Kitchen scene which again pits our unlucky children against ravenous dinosaurs. In this sequence it is as tense as anything the Master of Suspense, Alfred Hitchcock, shot and once again makes us believe in these creatures who are essentially men in suits.

But what suits. The marvellous practical effects in ‘Jurassic Park’ are the pinnacle of Stan Winston’s long career and one that has never been topped. Alongside his animatronics are the groundbreaking visual effects by Industrial Light and Magic who while the film was in production stumbled upon the power that computers could hold for filmmaking. A short segment of gallimimus skeletons running across a valley was played for Spielberg and the rest is history. The once planned ‘Go Motion’ work of Phil Tippett was discarded and all full scale dinosaur shots became CGI. In the past 22 years the ground work laid down in ‘Jurassic Park’ has improved and exceeded the imaginations of those animators back in 1993 but the effects on show here are still some of the most impressive ever realised.

Perhaps the biggest flaw of the film is that the special effects render the people of movie to supporting roles. Unfortunately this is the case at times but the cast that Spielberg assembles is nonetheless brilliant, and aside from Lord Attenborough, at the time were complete unknowns in terms of large summer movies. I’ve always found this to be a bonus for the film as watching it we have no preconceptions of what to expect from them and it is up to the film and them as actors to make us believe in them. The breakout performance is given by Jeff Goldblum who is the films moral compass and the mouth piece for Crichton’s own fears about the power of science. It is a performance that he has since incorporated into his own personality like Jack Nicholson after ‘One Flew Over The Cuckoo’s Nest’.

Aside from the obvious message in ‘Jurassic Park’ that science should be handled carefully it is also a film about parenthood. The character of Alan Grant goes through a journey of understanding from prickly child hater to responsible adult. It is arc that sometimes gets lost amongst all the dinosaur madness but there are some touching moments to be had. A particular favourite scene for me is when Lex takes hold of Grant’s hand for reassurance. It’s a small moment but one that speaks volumes about the films heart.

‘Jurassic Park’ will always be my favourite film as it has a strong link to my childhood. For me it is a way to be wide eyed and impressionable again. The joy of loading in the VHS and seeing the wavy lines eventually give way to the Universal Studios logo is something that is very personal to me and will always remind me of why films are important.