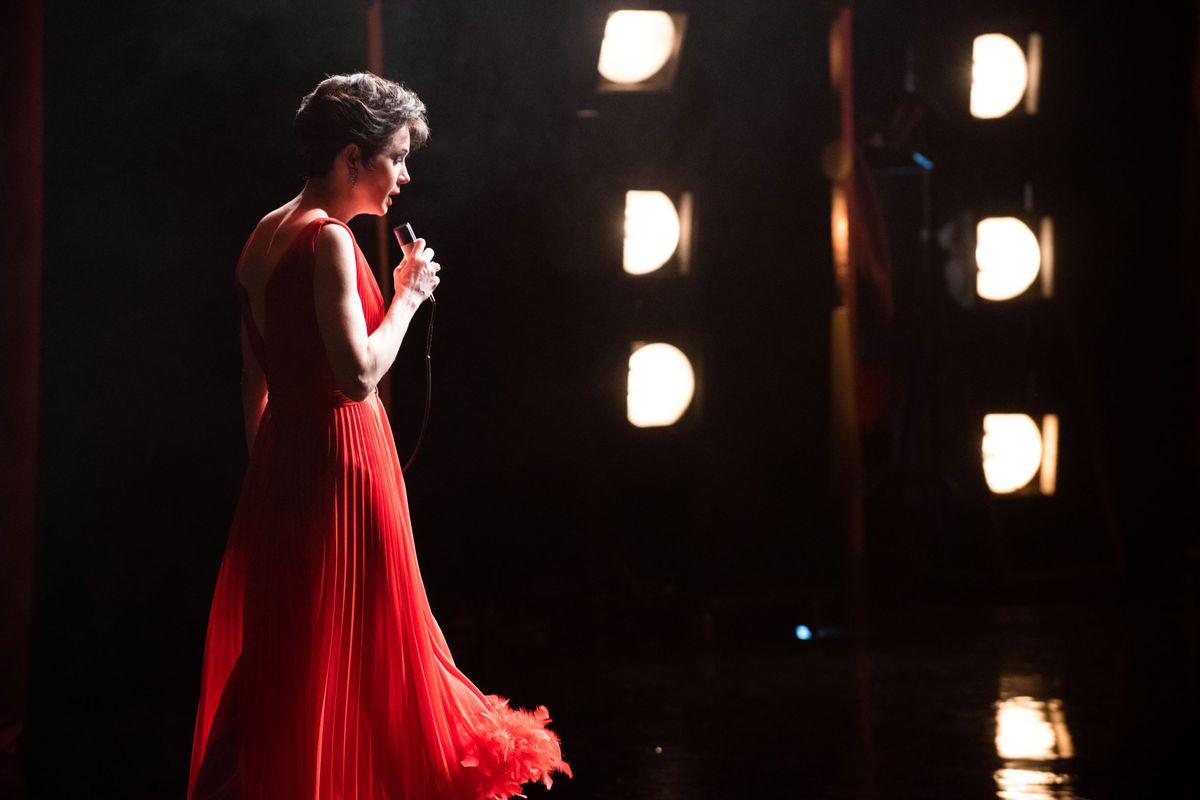 Judy starts so well. We see a close-up of the young Judy Garland’s face, wide eyed and full of self-doubt. From behind her comes the cajoling, manipulative and faintly sinister voice of studio boss Louis B Mayer. He tells her of the countless dead end small towns across the USA where hundreds of young girls dream of being where she is. Where she and he are, is on the yellow brick road on the set of The Wizard of Oz, the film that would make Garland a legend for all time. He tells her how so many of those girls are prettier than her, taller than her, more ambitious than her but what they lack is the one thing she has; THAT voice.

Garland is apologetic. She withdraws her complaints about the long hours and lack of normal childhood experiences like eating a burger or going out with friends. She expresses her gratitude to the man and system that gives her so much.

Fast forward 30 years and Judy Garland is a washed up, broke, homeless mother of three who can’t get a decent gig because she is so unreliable. Only the English will take a chance on her, “because they’re crazy”.

So, she reluctantly leaves her two younger children, Lorna and Joey Luft with her ex-husband, their father, marvels at a Hollywood party at the confidence of her eldest child, Liza Minnelli, meets the younger man who will become her fifth husband and sets off for London. There she is to embark on a sold-out five week residency at the Talk of the Town theatre with a series of live shows. Her frail body pumped with the pills which replace food and sleep, her mind racked with bitter memories, she’s not the most stable star to invest in. She refuses to rehearse and has no sense of time. The shows are hit and miss, depending on Judy‘s mood and level of sobriety. Despite the stellar efforts of her sensible British assistant played by Jessie Buckley and the increasingly exasperated promoter Bernard Delfont (Michael Gambon) it’s clear that something has to give – either the tour or Judy.

Few entertainers deserve the biopic treatment more than Judy Garland. She is the tragic gay icon to end all tragic gay icons for a reason. The former Frances Gumm was put on the stage at the age of two by a pushy mother who tried to live out her own failed dreams of stardom through her prodigiously talented daughter. Her beloved father abandoned the family due to issues around his own sexuality. The pre pubescent Frances was put in the charge of the notorious Hollywood studio system. There, with a new name, Judy Garland, the young girl who could sing dance and act became a huge child star and later successfully transitioned into an adult one.

But fame came at a price. In order to make as much use of her while she was still a child she was plied with amphetamines, barbiturates and other drugs to keep her working for up to 18 hours a day. Not surprisingly she became reliant/addicted to various stimulants and they came to adversely affect her performances.

Her adult life also brought her financial woes, often caused by husbands who frittered away her hard earned money. This led to the need for a gruelling work schedule which, in turn, led to more addictions to keep her going. This vicious circle continued until her death at the age of 47.

However, this film, directed by Rupert Goold, takes all that promising material and produces a biopic by numbers.

Judy Garland was famous for singing from her heart and it’s heart that is largely missing from this film. All the ingredients are there; The emotional pull of her children, the constant pill popping, the agonising loneliness, the shady exploitative people around her, but somehow little really pulls you in into the tragedy or indeed triumphs of Judy Garland’s life.

What is undeniable though, is that Renée Zellweger gives a towering central performance. Like Meryl Streep in the abysmal The Iron Lady, she rises above the uninspiring script, dialogue and direction to bring Judy Garland to life.

She doesn’t provide an impersonation. She doesn’t try to become Judy. She brings the woman to life in an exquisite, heart wrenching way. She catches every mannerism and facial twitch but it is what her face conveys of Judy‘s life and experiences without uttering that will get her the award nominations and probable wins.

However, Judy is not all tortured anguish. Garland was a glorious performer and Zellwegger absolutely shines when she’s on stage. Again she doesn’t attempt to copy the voice but offers her own interpretation of it and it works perfectly.

And yes, you WILL sob at Somewhere over the rainbow. It would be rude not to.