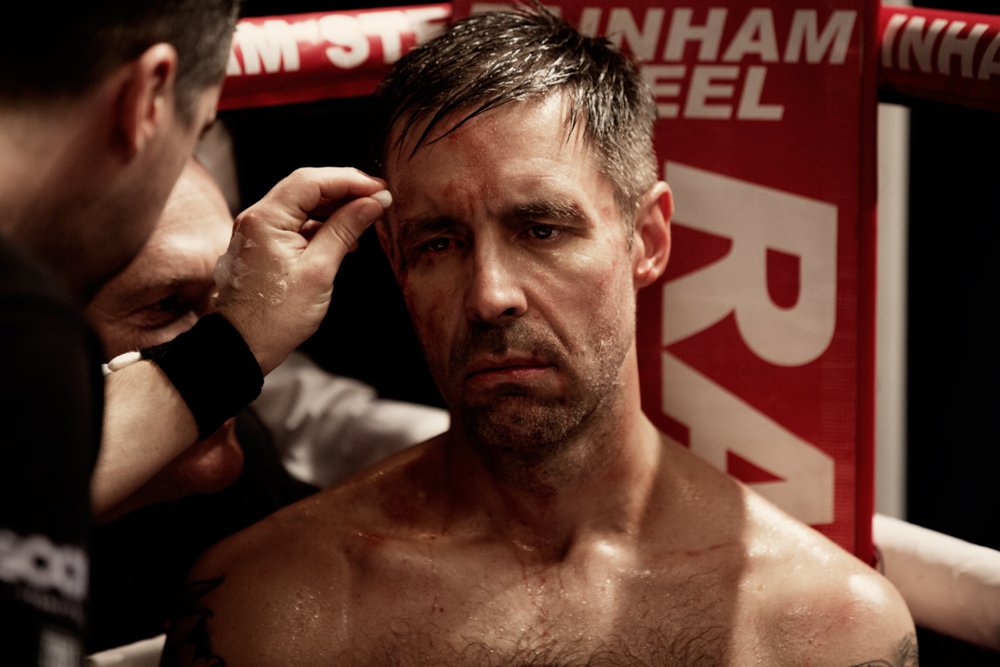 After the BAFTA winning Tyrannosaur in 2011, Paddy Considine dons his writing and directing hat yet again to bring us Journeyman, the story of Matty Burton, a boxer whose life is irrevocably transformed after his final ever fight. It can’t be an easy task to follow up such a warmly received debut and with Considine’s obvious talent, the expectations are set high for Journeyman to hit all the right notes. The question is, can it deliver? The answer is yes, but only in parts. It can’t be denied that the sterling performances evoke a strongly emotional response, but the story itself somehow never quite manages to pull you fully inside its walls.

In conjunction with writing and directing, Considine also takes the title role of Matty, the boxer determined to prove his worth and retain the title that means so much to him. A title that some believe he came to by default and does not deserve. This, alongside the death of his father spurs him on to challenge the new kid on the block Andre ‘The Future’ Bryte, to a defensive title bout. The film moves quickly to the fight itself, establishing back story through home video footage and a pre-match press conference between Matty and Bryte, played by Anthony Welsh, (who does a fantastic job of making the upstart boxer cocky and unlikeable). He warns Matty that this fight will be life changing; a fact he then frustratingly mentions repeatedly. After the fight, Matty returns home to his wife and baby daughter, relatively unscathed. However, after collapsing, it becomes clear that the head injuries he has sustained are extreme and will have a monumental impact on his life, his relationships and his future.

Journeyman (meaning a fighter with adequate rather than outstanding skill) feels like a very personal film, perhaps a tale itching to be told. When watching the performances on screen, the passion for the project is unquestionable. Considine is excellent, particularly when portraying the injured man trying to rebuild his life. Whilst Jodie Whittaker (as his wife Emma) is beautifully understated, conveying emotion in a powerful, quiet manner. The film undoubtedly works best when these two actors are on screen together, particularly in the aftermath of Matty’s injuries. After they have reached rock bottom, a phone call between the two in which Matty tries to convey his feelings to his wife will tear at your heart; Considine is simply outstanding. Other performances, including Paul Popplewell and Tony Pitts as Matty’s friends and training team provide solid support, creating realistic characters that find themselves faced with an extraordinary situation.

Performances aside though, the film as a whole doesn’t entirely fulfil. Whilst it visually replicates a recognisable life, there are not enough cinematic flourishes to create a complete story world in which you can lose yourself. It never gives way to full blown fist pumping drama, nor does it seat itself at the kitchen sink realism end of the scale. It is a tale that lies somewhere in the middle, an important story nicely told but it feels that something is missing.

With a slight running time of just 92 minutes, the surface of the story is only beginning to be scratched and the opportunity to explore Matty’s behaviour and acceptance of his situation feels lost, as if a few vital scenes never made it to the final cut. As the film pushes swiftly towards the climax, the final scene ends up feeling understated instead of powerfully triumphant. In short, Journeyman succeeds based on its two central performances. The story itself unfolds precisely as we expect and unfortunately (as much as we may want it to) it doesn’t take us anywhere we haven’t been before.