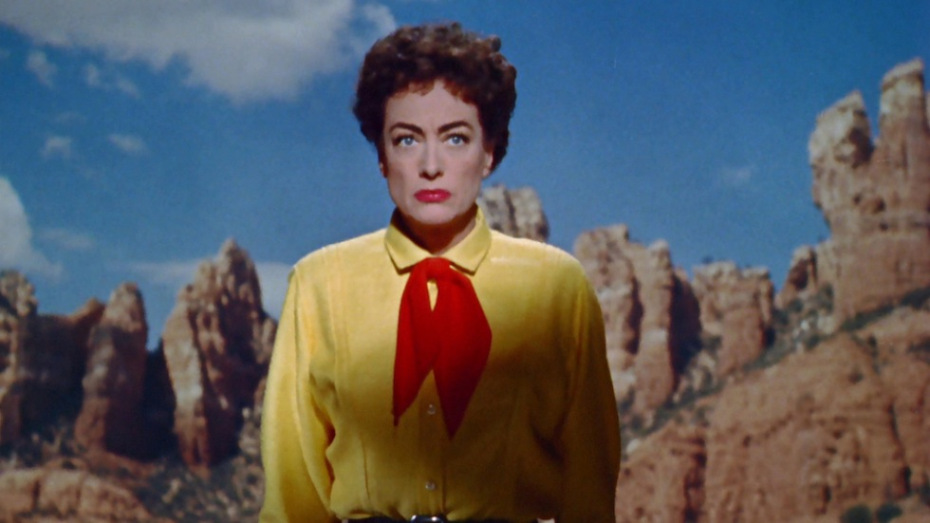 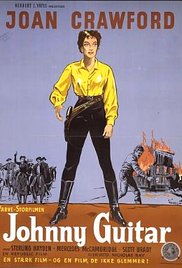 Confession time.  It’s not fashionable, I know, but I like westerns. I always have and always will.  I was brought up on them so I’ve seen plenty yet, for some reason, one had always escaped me.  But its re-release this week in selected cinemas means I’ve been able to put that right.

The film is Nicholas Ray’s “Johnny Guitar”, made in 1954 and disliked by American audiences for not being the conventional western they wanted.  Since then, it’s built up a cult following – being championed by Martin Scorsese hasn’t done any harm – and its return is remarkably well timed.

Ambitious businesswoman Vienna (Joan Crawford) has built a saloon and gambling den on the outskirts of an Arizona town, aiming for her own empire when the railroad opens.  But the townsfolk are determined to stop her and, when the stagecoach is held up, she’s suspected of shielding the gang responsible.  As it becomes clear that she’s going to be put out of business, a face from her past arrives to stand by her.  But Johnny Guitar (Sterling Hayden) isn’t everything that he seems.

Nor, it turns out, is the film, despite having B movie written all over it.  It’s from Republic Pictures, who specialised in both westerns and support features and the credits are in the font we all associate with the genre. Outdoor scenes filmed on a stage set with static or moving scenery in the background stick out like the proverbial sore digit.  And there’s the familiar faces of B western stalwarts like Royal Dano and Denver Pyle in the cast, alongside actors who graduated to bigger and better things: Ernest Borgnine in one of his earlier heavy roles and Ward Bond before he became a regular on John Wayne movies.

But a B movie it most definitely is not, with its multiple, challenging political themes.  A contemporary of Arthur Miller’s anti-McCarthy allegory, “The Crucible”, the film takes on witch hunts, this time with Vienna on the receiving end.  The hostility among the townsfolk is fuelled by Emma (Mercedes McCambridge – great name!), who has two powerful motives for running what she sees as her rival out of town: jealousy and greed.

Feminism runs throughout the film, with both Vienna and Emma dominating the men around them.  And with their remarkably similar hair styles and features, they could easily pass as sisters: they have the same cold-blooded ruthlessness and determination to get their own way.  When Emma and the town’s posse catch up with Vienna, all of the men back away from the idea of hanging a woman.  Emma has no such qualms.  Vienna, on the other hand, takes things one stage further, by dressing in figure hugging male clothes, sometimes including high boots.  It’s her appearance that’s earned the movie its reputation for camp and there is a whiff of the dominatrix about her.  And, given that she was just shy of her 50th birthday when the film was made, Crawford makes an unconventional role model for older women – which would have raised an eyebrow or two in the mid-50s.

It’s a heavily stylised watch.  Everything, from the costumes to the colour, is constructed for maximum dramatic effect.  Watch the scene when the posse charges into the empty saloon, only to find Vienna clad in a brilliantly white dress playing the piano.  Or when Emma shoots down the building’s giant circular lamp, setting fire to the whole she-bang.  Colour reinforces the contrast between the characters, although none of them are pure as the driven snow: in the fine old western tradition, the bad guys – and gal – wear dark colours, but the heroine in particular is in bright, sometimes lurid, shades of red, yellow and blue.

“Johnny Guitar” isn’t your average western, and certainly isn’t a B one.  With its sky- high emotions, vivid colour palette and intense melodrama, it’s closer in tone to an opera – a horse opera, if you like.  But with its political undertones, contemporary resonances and a storyline that would easily fit in other genres, there’s more than enough here not just to satisfy western fans, but film fans as a whole.