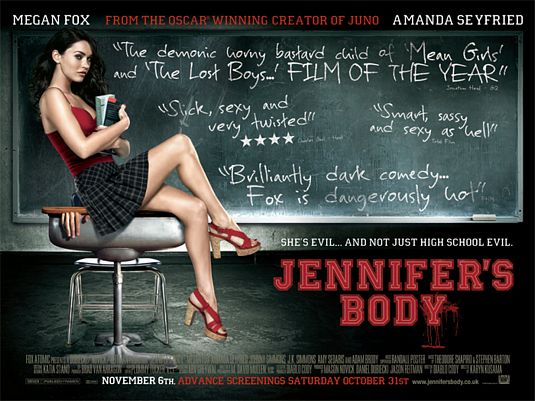 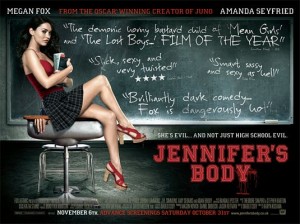 When i first heard about this film, myself and pretty much the whole human race rolled our eyes and dreaded having to watch an hour and a half of ‘recently axed from Transformers’ vapid eye candy Megan Fox try to act. However, this is the only film i have seen in which Fox actually pulls off a great performance!

Fox plays the popular high school cheerleader and school goddess Jennifer. Everyone adores her, everyone worships her and everyone has slept with her. Her best friend Needy played by Amanda Seyfried (Mean Girls, Mamma Mia) is the complete opposite to Jennifer in every way possible. The two became best friends as children which they describe as ‘Sandbox Love’ and are the true meaning of BBF’s. Aww, isn’t that nice.

After an amusing intro that sees Seyfrieds character in a mental asylum attacking various members of staff, we get to see how she ended up there. Cut to before the point in time where everything goes wrong and we see a happy Needy and Jennifer in school. We also meet Needy’s boyfriend Chip (Johnny Simmons – Scott Pilgrim vs The World).

Later we see the mis-matched BFF’s go to a local rock concert to see a band that Jennifer likes called Low Shoulder (frontman played by Adam Brody – The O.C, Gimore Girls). Unfortunately, a fire breaks out and burns down the entire bar killing most of the people in there and ruining the night. Jennifer and Needy escape the carnage before the bar blows up. Traumatised by what she just survived, Jennifer is pulled into Low Shoulder’s van without much fight and the band drive her away as Needy is left on her own outside the burning bar.

It turns out that the eyeliner wearing indie rockers with awesome haircuts are in fact demon worshipping, eyeliner wearing, indie rockers with awesome haircuts cultists, who plan to make a deal with a demon to get success with the band. Only problem is that to complete the ritual, thy have to sacrifice a virgin and as i stated earlier, Jennifer is no virgin so the ritual goes a bit lets say….wrong.

The band get their fame and success but as a price for getting the ritual wrong and not using a real virgin, Jennifer returns to life as a lovely flesh eating succubus who eats boys to stay strong and beautiful. As the male body count rises in town and Jennifers actions become more suspicious, Needy takes it upon herself to finally rid the world of Jennifer’s evil with help from her boyfriend Chip.

More of a cult movie rather than a major blockbuster, Jennifer’s Body surely has a strong following. I myself am very much in love with this movie. The content is spot on with the right amount of comedy, violence, gore and relatable pop culture references. As i mentioned earlier, Fox gives a fantasticly surprising performance, probably because her character requirements mean that she doesn’t really have to act. The real star is Seyfried who’s nerdy, weak character is seen to transform into a strong and brave female lead over the course of the film.

The special effects are great and unlike a teen orientated horror, the gore is sick but isn’t over-done. Jennifers succubus alter is a beautiful mess of sharp teeth and other nasties that are almost as scary as her acting in Transformers. The soundtrack is current and is a strong fuel for the movie.

Director Karyn Kusama and Writer Diablo Cody (Juno) have done an outstanding job in creating a comedy-horror aimed at our generation’s youth that is current and explores all relevant subjects of high school youth including sexual awakening, sexuality and life in high school. Not everyone will appreciate the film but for those who enjoy cult movies and cheesy horror, this is a great one to add to your collections.