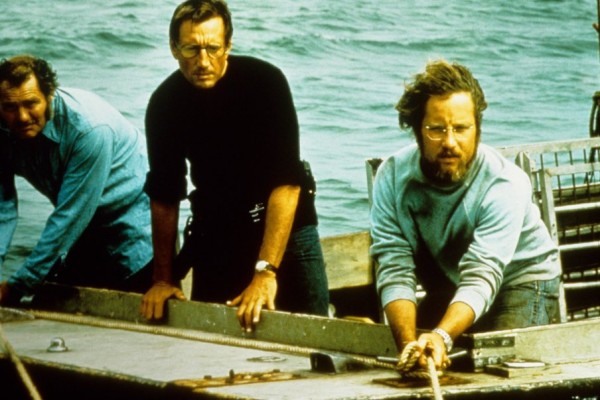 When film producers Richard D. Zanuck and David Brown purchased the rights to Peter Benchley’s novel Jaws in 1973, for $175,000, they could not have foreseen the difficulties in adapting it for cinema release.

Brown once claimed that had they read the book twice, they would never have made the film because they would have realised just how difficult it would be to shoot certain sequences.

Ultimately, because of the problems with script and shooting, there were delays which didn’t make the set a happy one. Disgruntled crew members, an anxiety-ridden director (Spielberg has since admitted he thought his career was over before it even begun), mechanical sharks failures, unfinished scripts and even uncast actors, didn’t suggest that there would be a Hollywood-style ending for Spielberg’s now flawless feature film.

Jaws could have been the greatest film never made. Continual problems during production took the film way over budget and the shooting schedule went from a proposed fifty-five, to a staggering one-hundred-and-fifty-nine days at a cost of nine million dollars.

John Sturges, famous for directing, amongst others, Bad Day at Black Rock (1955) and the World War II epic The Great Escape (1963), was considered to direct before the job was offered to The Culpepper Cattle Co (1972) director, Dick Williams. However, Williams was dropped from the project soon after, at the behest Zanuck and Brown.

As a result of this, twenty-six-year-old Steven Spielberg who had, the year before directed The Sugarland Express (1974), was offered the job. He would later say: “Jaws was a fun movie to watch…but not a fun movie to make.” Spielberg arguably showed his naivety in the director’s chair, by wanting to shoot the film at sea, in the Atlantic Ocean instead of a tank in a studio. It was a bold move by the young director and could have cost him his job and an early retirement for the constantly malfunctioning shark props.

Frequent sailing ships drifted into shot, at one point the boat even began to sink with the actors still aboard. Moreover, the bad weather and salt water led to further malfunctions with the sharks, causing further delays and a severe lack of film footage, which gave editor Verna Fields a gargantuan task in bringing any cohesion and flow to the film. Much of the success of Jaws is a tribute to the talents of Fields, who would go on to win an Academy Award for Best Editing.

Cinematographer Bill Butler must also be credited with the success of Jaws. His innovative camera techniques enabled him to shoot stable water level scenes regardless of the tide. The scenes at sea where the camera pans across distant ocean gives us a sense of alienation and nervousness, essentially grabbing the audience and planting us firmly into the shark’s domain. We, the audience are crew members aboard the Orca…whether we want to be or not.

Australian couple Ron and Valerie Taylor filmed real underwater footage of sharks, using a small actor in a cage to give the illusion of scale, suggesting the sharks were larger than they actually were. During the shoot, a great white attacked the cage and subsequently the scene was re-written to incorporate the footage and the storyline changed to have Hooper escape unharmed.

Because of the production malfunctions, Spielberg had to find a solution; and he did. In some regards, the delays were a blessing in disguise. The script could be amended and polished. Benchley was given the chance to write a first draft of the screenplay (this was actually a shrewd move on the part of the producers who wanted a script to be done because of an impending threat of a Writer’s Guild strike, which Benchley was not a part of). 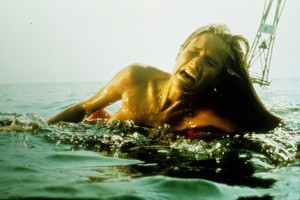 He wrote three drafts before it was turned over to other writers. Pulitzer Prize winner Howard Sackler contributed to the USS Indianapolis scene, which John Milius re-wrote only for Robert Shaw to re-write again. But most of the credit for the screenplay, other than Benchley, has to go to Carl Gottlieb who re-wrote the script during the nine weeks of principal photography. Gottlieb also played the role of Meadows, the politically connected local newspaper editor. Numerous sub-plots featured in the novel (such as Hooper and Ellen Brody’s affair and Mayor Vaughan’s political dealings) were taken out so Spielberg could concentrate on the main story and principal characters, i.e. the shark, Chief Brody (Roy Scheider), Quint (Robert Shaw) and ichthyologist Matt Hooper (Richard Dreyfuss).

Spielberg was forced to shoot scenes were the shark was only hinted at – i.e. the yellow barrels during the shark chase in the final act and multiple shots of the dorsal fin, adding more elements of suspense and tension. Simply allowing the audience to see the shark early on in the film would have been a mistake. The image of the great fish rising from the water to attack the first victim Chrissie (Susan Backlinie), with Williams’ pulsating strings playing away would undoubtedly look (and sound) impressive on screen, but the unknown entity, the enemy you can’t see, is a much more frightening proposition. Keeping the audience waiting for over an hour to see the shark rise from the water was a masterstroke, and better still; it comes after a joke, making it all the more unexpected, guaranteeing a reaction from an audience now on tenterhooks. Following the shark’s appearance, Scheider then delivers his now infamous oft-quoted ad-libbed line “You’re gonna need a bigger boat.”

Another way to achieve this, without the appearance of the shark was by the inclusion of a piece of music that would go down in history as one of the greatest film scores of all time.
In Disney’s Bambi (1942), the unseen antagonist ‘Man’ is only introduced to the audience by Frank Churchill’s theme of three simple notes which evokes feelings of anxiety and apprehension amongst the audience, who are hooked by this point. Similarly in Jaws, multi award-winning composer John Williams uses the same type of device, albeit, two simple notes (E and F, or F and F sharp). This theme consisting of six basses, eight celli, four trombones and a tuba has now become synonymous with suspense and impending danger, and most importantly, informs the audience of the shark’s presence, skilfully terrifying them in the process. The score especially has given Jaws an almost Hitchcockian sense of suspense throughout, contributing to its success and ever increasing appeal forty years on.

James Stewart once talked about what he called ‘moments’ in cinema. Truly great moments that people remember. They do not necessarily remember the name of the film, who starred in it, who directed it; nothing. But they remember a man in a room giving a certain look or expertly delivering a particular line of dialogue. These are things that stick with us, and Jaws has many moments of its own.

The dolly zoom shot on Brody after Alex Kintner’s death; little Sean Brody imitating his father at the dinner table; The USS Indianapolis speech. Shaw’s ‘Spanish Ladies’ and ‘doll’s eyes’. There are dozens of examples. For me, it is all those and more. Everything – all the ‘moments’, the music, the performances, the writing, all come together to make a flawless piece of filmmaking.

It brings out that ten-year old child in me that saw Jaws for the very first time on video (after seeking out another film from the director of Jurassic Park – my first cinema experience). I still jump at the Ben Gardner scene, still get goosebumps listening to Williams’ score and still cheer for Brody as he grits his teeth and utters “Smile you son of a bitch!”

It’s a movie that will keep me smiling for the next forty years, and for a film with many themes and areas of analysis, but ultimately, about a shark; that’s an pretty impressive legacy. 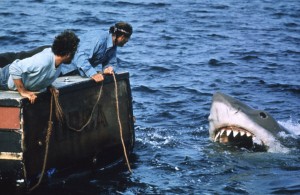 11 Most Iconic Spielberg Movie Posters Of All Time

One Musician’s Response To Whiplash