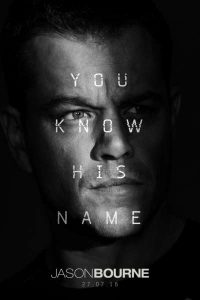 Another week, another sequel, but after ‘Star Trek Beyond’ it’s now the turn of the Bourne series, and it’s moving on to episode four.  Or five, if you count ‘Legacy’, but few people do.  Not only that, but this latest episode re-unites Matt Damon, who everybody considers as Bourne, with the director of ‘Supremacy’ and ‘Ultimatum’, Paul Greengrass.  Good omens or what?

This time Bourne is piecing together the jigsaw of his past and, finally, working out who he is.  Disconcertingly for the CIA, he’s been off the grid for some time, but he surfaces in Athens, working in tandem with one of his regulars, Nicky (Julia Stiles). She steals a load of files from the CIA and, of course, they’ve noticed, but they’ve also spotted Bourne’s involvement.  So while he’s delving into his past, he has to stay one step ahead of them, especially its Director (Tommy Lee Jones) and ambitious operative, Heather Lee (Alicia Vikander), who is convinced she can bring him in.

It all gets off to an impressive start, with a superbly choreographed crowd scene, a major demonstration in Athens.  The scale is epic, with thousands of people, police and pyrotechnics and it makes for an outstandingly convincing sequence that feels so immediate it could have been plucked straight from a TV news channel.  Just as he did in ‘United 93’ and ‘Captain Phillips’, Greengrass has used his documentary background to great effect.  And it’s also handy cover for Bourne and Nicky as they weave in and out of the crowds to escape the attention of the CIA.

If you think that opening is good, wait until you get to the grand finale, something that we’ve come to expect from the Bourne movies.  A car chase.  And what a car chase!  Greengrass has most definitely upped the ante with this one, setting it on the Las Vegas Strip, with all its garish lights, resort hotels and casinos – and Bourne in a cop car chasing a SWAT vehicle.  They both end up slap bang in the middle of a casino, but what they leave behind them is a spectacularly audacious trail of vehicular carnage.  It’s insane, OTT and utterly adrenalin-sapping.

But here’s the rub.  As you breathlessly stagger out of the cinema, that scene is fresh in your mind – and it makes you think that the film as a whole was mind-blowing.  Is it really?  In the soothing light of day, not quite.  Yes, it’s topped and tailed with two outstanding and detailed action sequences, but the rest is more concerned with Bourne digging into his background and being pursued by the CIA.  It’s not as convoluted plot as you might expect from an action thriller.  And, to beef it up, Greengrass introduces a little political edginess with references to Snowden and the thorny issue of internet security as a whole, not just for the secret services, but the general public as well.  The film doesn’t have any answers, but we are shown a society where those in power manipulate patriotism and potential terrorist threats for entirely their own ends.  And it’s not a pretty sight.

While the film’s central section doesn’t quite live up to its beginning and end, there’s some eminently watchable performances to enjoy.  Damon, as we all know, had just 25 lines of dialogue – not exactly mind-bending, but he has to do an awful lot of physical stuff to make up for it.  And when he’s not communicating that way, his cold eyed look does the rest of his talking.  Tommy Lee Jones and Vincent Cassel as his henchman command the screen as the main villains and it’s only Alicia Vikander who lets the side down.  She spends most of her time looking serious and staring at a screen.  Her character thinks she’s terribly clever but she’s actually out of her depth and so is Vikander.

‘Jason Bourne’ follows in the grand “if it ain’t broke, don’t fix it” tradition, giving the audience what it expects – and a bit more with that knock-out finale.  It’s a great night out but it isn’t a classic of its type.  In fact, it’s showing signs of hurtling down a similar road to the ‘Fast And Furious’ franchise.  ‘Bourne 7’ anybody?