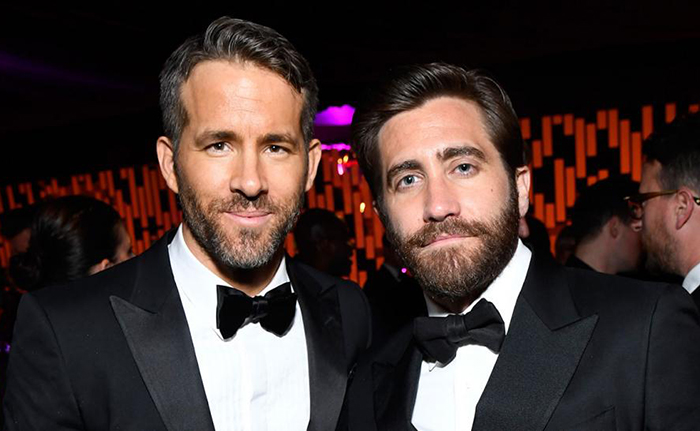 It’s common knowledge that Nightcrawler star Jake Gyllenhaal and Deadpool dynamo Ryan Reynolds are close personal friends, with the former even showing up hilariously in a video celebrating the latter’s GQ Man of the Year win in 2016.

For the latest issue of Hollywood trade magazine Variety, Gyllenhaal was asked to pen an op-ed celebrating Reynolds’ inclusion as one of the 50 influencers on their New Power in New York list, which you can read in full here:

I first met Ryan many years ago, and he struck me immediately as quick and warm and thoughtful, a gentleman in an era of foppish putzes, the unlikely love child of Mel Brooks and Dorothy Parker and Gary Cooper. He was also taller than me. Against my wishes, we became close friends.

Audiences got to know Ryan a bit through his work in a string of romantic comedies. He was undoubtedly charming and handsome (annoying), but he never quite had the space to fire on all cylinders. What we all want for our friends in this business is for the world to see what we see, and as actors, that only happens in a perfect storm of timing and the full luck. After years of waiting and struggling to fit his unfortunate, pear-shaped physique into the skinny jeans of a conventional romantic lead, Ryan made his own luck with Deadpool.

Ryan built the house of Deadpool brick by brick, constructing a space that inspired him and let him stretch to every corner of the room. The remarkable success of Deadpool may have shocked the suits who took a chance on financing that ragtag superhero movie, but for the people who know and love Ryan, it was no surprise that the whole damn world rallied as soon as it had the chance to really see him: all of the edges and darkness, the crackerjack wit borne from a lifetime of sensitivity and sadness, and against all odds, the openness.

But make no mistake about it: For all of the effortlessness that Ryan projects, the man works tirelessly. He writes all night so he can be present for his kids and wife all day (and thanks to Aviation gin [which Reynolds owns], he can pull off the latter).

So often — too often — the wildly talented people of our world funnel the lion’s share of their energy into their work, but as good a writer and comedian as Ryan is, he is a better friend and father and husband. And that, for me, is the true mark of power.

Deadpool 2 is out now on Digital, DVD, Blu-Ray, and 4K. Jake Gyllenhaal is currently in Venice, shooting Spider-Man: Far From Home.